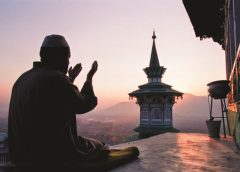 He was a blessed gift given to David, peace be upon him. That is, he was a prophet son given to a prophet father. 1

He was the prophet who asked Allah (swt), “My Lord, forgive me and grant me a kingdom,” 2 and who was given such a sovereignty that has not been given to any other prophet.

He was the one to whom the wind was subjected so that he could travel wherever he wanted.

He was the one who was obeyed by jinns and humans.

He was the one who could understand the language of every animal.

He was the one who built the first qibla of Islam, Masjid al-Aqsa.

However, despite all of these qualities, he was mentioned by his Lord as “an excellent servant.” 3

Peace be unto the “servant” Suleiman (as).

He was the wealthiest of his time thanks to the blessings he attained that his sheep’s wool has become silk thread.

He was the one whose house hanged in the air upon his prayer when he invited the ruler of his nation to faith and this ruler demanded him to do that as miracle.

He was the pious man with whose prayer and breath’s blessings the mirage and mist in the desert turned into water.

However, despite all of these qualities, he was mentioned by his Lord as “an excellent servant.” 4

Peace be unto the “servant” Ayyub (as).

He was Ahmad on the earth and Muhammad in the heavens.

He was the one for whom the macrocosm- the universe- and microcosm- the human- were created.

He was the one who attained the good news “And We have not sent you, [O Muhammad], except as a mercy to the worlds,” 5 it was known how precious he was in the sight of the Divine One.

He is the one who- at a time when the prophets Adam, Noah, Ibrahim, Musa, and Isa will say “Nafsi, nafsi!” because of the horror of giving account in the gathering place of hereafter- will say “Ummati, ummati!” forsaking himself and will be occupied with the salvation of the believers.

He is the one that when Adam (as) committed the known sin, he raised his head asked Allah (swt) “(O my Lord!) Forgive me for the sake of Muhammad.” Allah (swt) asked, “Who is Muhammad?” Adam replied, “When You have created me, I have looked up in the heavens and seen that “لا إله إلا الله محمد رسول الله” (There is no god but Allah, Muhammad is His Messenger) is written there. Thus, I have known that there is no other person in Your sight more honourable than him whose name You have written beside Yours.” Allah (swt) said, “O Adam! He is the last messenger from your offspring. Were it not for him, I would not have created you.” 7

One day our Prophet (asm) was having a conversation with the Angel Gabriel (as). Who knows, maybe he hadn’t eaten for days. Gabriel (as) was his the most loyal friend. And he said to Gabriel (as), “I haven’t eaten for days.” Suddenly they heard a sound like thunder. Allah sent an angel to the Prophet. 8 Gabriel (as) said that this angle came down to the earth for the first time. The angel brought salaam from Allah and said, “O Muhammad, Allah the Exalted has given you the choice to be a prophet servant or a prophet king.” The Prophet turned to Gabriel for advice and Gabriel indicated that he should be humble. The Prophet said, “Rather, I will be a prophet servant.” 9

Peace and blessings be upon the “servant” Muhammad Mustafa (asm).

And a servant among the servants

It is narrated that when the Prophet Musa (as) was climbing the Mount Sinai, a man stopped him and said, “O Musa, I have a question that consumes me. If I do not get the answer, I will never be relieved. Could you please ask your Lord if I am going to deserve Paradise or Hell?”

While returning, Prophet Musa (as) found the man waiting impatiently on the road.

The man suddenly came to life, got excited and exclaimed, “Stop, o Musa! Do not tell the rest! Just tell me please, did my Lord say ‘Tell My servant’? Did my Lord say ‘My Servant’?

Prophet Musa (as) answered, “Yes, He said so.” Upon this the man said, “Then do not tell me the rest, o Musa. Now that my Lord called me ‘My servant,’ it is no more important to me whether He sends me to Paradise or Hell.”

And he wandered away happily.

Peace be unto those who consider “servanthood” as higher than any other rank.

Peace be unto those who tirelessly serve their Lord as servants with the sense of duty.

Peace be unto those who engrave the truths of the Qur’an to the hearts in need of faith.

Peace be unto those who spend their nights in humble prostration just for the sake of Allah (swt).

Peace be unto those who represent the character traits of the Prophet (asm) and the way of the companions.

Peace be unto those who feel the pain of the strikes against Islam in their hearts at the first place.

Peace be unto those who forsake the Paradise, houris and mansions, and struggle to be a servant.

May Allah help us all reach the consciousness of being servant of these people, and resurrect us with them in the hereafter. Amin, amin, amin.

8- Imam al-Tabarani says this angle was Israfil (as).