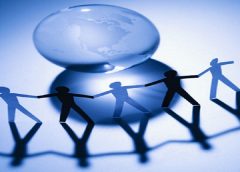 Nationalism, and its extreme version racism, has fed many conflicts in the history of the world. These illnesses, which are now aggravated problems amongst the world’s Muslims, are capable of being healed by the cure of the Qur’an.

Racism is like a deadly poison which threatens the peace in communities and in the international world. Disputes based on ethnicities in the Islamic world are not Islamic and they need to be uprooted from the communities.

Why did Allah create us with different languages, colours, tribes and nations?

“O humankind! Surely We have created you from a single (pair of) male and female, and made you into tribes and families so that you may know one another.” (Hujurat, 49:13)

The differences mentioned in the verse have been given to humanity for the purpose of getting to know and cooperate with each other. They are not to deny each other, not to see each other as alien, or to become enemies, since every nation, clan and tribe have different virtues and qualifications, being the recipients of a variety of divine manifestations. It is not possible for a single nation or tribe to reflect all the virtues of humanity.

Allah (SWT), who is Wise and Just, distributed virtues and qualifications among people. Every nation was distinguished by having some special qualities and virtues. That is why the verse orders the nations to get to know each other, cooperate with each other and benefit from each other’s qualities. Only through this cooperation can people reach the level of true humanity, and only in this way can true civilization be established, as in the era of bliss, which was the civilization of Madina. It may be concluded that the diversity and differences we find are not for challenging each other as rivals, but they are rather for standing side by side, and for meeting and cooperating each other and bringing together our special virtues and qualities.

A man’s having different kinds of limbs and organs is for being able to live his life. The essential thing is that the organs work in harmony. A person’s hands do not compete with each other, nor do their eyes criticize one another, nor does their tongue oppose their ears, nor does their heart see the faults of the spirit. Rather, their members complete the deficiencies of one another, veil one another’s shortcomings, assist one another in meeting their needs, and help one another with their duties. Otherwise, the life of that person’s body would be extinguished, their spirit would go away, and their body would decompose.

The division of an army, which ensures the security of people, into regiments, battalions and squadrons is to protect the country from the assaults of their enemies. Clearly the divisions within the army are not for the purpose of enmity between each other.

In the same way, the Muslims are like a body which consists of different organs. They are like a large army made up of different nations and tribes. They are also formed into different departments like a state. All these differences are for the harmonious continuation of life as human beings and as Muslims. It is for coming together and cooperating with each other. They help one another to work with all their capacities in true solidarity and unity, to support each other and to achieve an example of the true brotherhood of the hereafter in this world.

Since the Muslims have the same Creator and Provider, and the same Prophet and Holy Book, and they turn towards the same place in prayer, all these common points should entail brotherhood, love and unity. To deny each other’s identity or to nurture feelings of animosity would be defamations of the divine power of Allah. It would mean that one was rejecting one of His signs and demands.

The Qur’an states that the different nations are among the signs of Allah (SWT) in the following verse, “and among His signs is the creation of the heavens and the earth, and the diversity of your languages and colours. Surely in this are signs indeed for people who have knowledge (of the facts in creation and who are free of prejudices).” (Rum, 30:22)

The Different Kinds of Nationalism

The first: It is negative nationalism, namely, racism. Islam disapproves this kind of nationalism.

It is a sort of dire and harmful nationalism, which feeds on and rejects others and nurtures enmity towards other nations.

Negative nationalism is a synthesis of heedlessness, misguidance, hypocrisy and darkness, and thus it has been reported in the hadith as follows: “Islam has done away with the racism of the age of ignorance.” (Ahmad b. Hanbal, Musnad, IV, 199, 204, 205)

In the Qur’an, it has been said: “When those who disbelieved harbored in their hearts fierce zealotry (coming from egotism, tribalism, and feuding), the zealotry particular to the Age of Ignorance, Allah sent down His (gift of) inner peace and reassurance on His Messenger and on the believers, and bound them to the Word of faith, piety, and reverence for Allah. They were most worthy of it and entitled to it. And Allah has full knowledge of everything.” (Fath, 48:26)

Imam Nursi expounds upon the fact that the racism which has been rampant for the last couple of centuries and has caused many nation states to be established, is not practical, as follows:

The emigrations that have taken place throughout human history have caused the nations to be mixed with each other. Thus is especially true of the places which have been cradle to many civilizations, where huge migrations have taken place, and the nations have undergone tremendous changes. Under these circumstances, only when the information in the Lawh al Mahfooz is resorted to, can the nations be distinguished from each other. Therefore, to try and establish communities on their true ethnic roots is both harmful and meaningless.

Nursi explains the dangers of the idea of racism as follows:

This idea is like a deadly poison, since it causes the Muslims to be divided and defeated. It is one of the reasons for the enmity and disorganization amongst the Muslims.

Racism is the enemy of humanity. The nations which have been motivated by racism have caused huge damage both inside and outside of their countries as can be seen from history, they endangered a lot of people and they were not themselves spared from the dangers of racism. A racist motivation overlooks personal crimes and rather condemns the whole family, tribe or nation for the crime of the individual. Furthermore, it considers itself righteous regarding this issue.

However, it is not possible to establish true righteousness and justice with this motivation. For this reason, those who have been motivated by racism have terrorized other nations, alienated themselves and caused terrible disputes, fights and sufferings. Since feelings of security and trust have been badly damaged, everybody needs to be responsive and aware to avoid the dangers of action based on this type of motivation. The Second World War is an exemplary case for this argument against racism.

The second: It is positive nationalism. There is no harm in loving your nation, having compassion for your people, helping them and working for their development without having contempt and hate for other nations and rejecting their identity. These feelings are natural. They are feelings which Islam does not forbid since they are positive and encourage togetherness.

With this kind of nationalism, there is no feeling that you will only see your own benefits in the losses of other nations. There is no need to create polarization in this love of one’s own people, it originates from the internal dynamics of social life. It is a cause of solidarity and cooperation, and  strengthens the Islamic fraternity.

However, this understanding which is basically innocent, should also serve Islam and should be a fortress and armour for Islam. It shouldn’t be replaced with Islamic fraternity because the contract of the brethren of Islam is a heavenly one. It is Allah (SWT) who has announced that the Muslims are brethren, therefore this fraternity is eternal. It doesn’t end with death as do worldly friendships and ranks. It will yield benefits and continue in the intermediate realm and hereafter.

In this matter, it is especially relevant that we Easterners are not like the Westerners. What dominates our hearts are religious feelings. The Eternal Fate’s sending most of the Prophets in the East shows that only religious feelings will wake up the East and lead it to real progress. The Era of Bliss and later are good examples for this argument.

There are hundreds of ways in which the sacred nationality of Islam brings benefit to the social life of Muslims.

For example, what sustains Muslims and helps them to be strong in the face of superpower states is the idea that they learned from the Islam: “If I die, I will die a martyr, and if I survive, I will be a veteran.”

A Muslim fighter faces up to death with excitement when he has this idea. Because of this heroic idea our veterans, often few in number, overcame enemies who outnumbered the Muslims.

So what is it that inspired such lofty devotion in the spirits of the common people? What can be replaced with such patriotism so that he devotes his life to it willingly?

The Muslims of Today and Racism

The Muslims of today are communities which are tyrannized politically and economically by foreigners because of the disputes among them, although they are poor and they need each other.

The fact that Muslims are alienated from one another and hostile towards each other motivated by racism is a disaster too terrible to contemplate. This is like a madness in which you ignore the horrible snakes to avoid the bite of a fly. And the fraternity in Islam has never been based on bonds of ethnicity.

Furthermore, contending ethnic-based ideas in such a time, when the superpowers of the West are opening their paws with greed like an insatiable dragon, means both ignoring and supporting these superpowers.

Antagonizing and opposing other Muslim communities, and ruining the unity of the Muslims based on unimportant excuses and with the motivation of racism holds many harms and dangers. Having contempt for Muslims means that you are indirectly being disrespectful to Islam and the Qur’an. Enmity towards Islam and the Qur’an is a kind of enmity towards the lives of all Muslims, both in this world and the hereafter. Ruining the basics of both lives in the name of patriotism is not patriotism at all.

Moreover, the idea of racism cannot be respectful to sacred concepts of the religion, and it is always looking for excuses to harm others. Damaging the eternal fraternity which Islam establishes also causes us to be deprived of the spiritual support of Muslims who help us with their prayers.

The unity of the hearts in Islam is love for your nation, education, working and avoiding debauchery.

We, Muslims, are one nation and as long as we are together, we are strong.