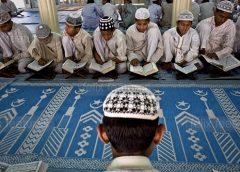 Not so long after a church in Gainesville, Florida, planned to host an unjustifiable “International Burn a Quran Day” on the ninth anniversary of the September 11 and gaining some supporters among radical hate groups, Muslims around the globe reacted this unacceptable and abusive provocation in many various ways. National religious leaders condemned him and there was almost no one left who did not condemned him. After President Obama and Gen David H. Petraeus condemned Terry Jones the mastermind of hateful plan to burn the Quran at his Gainesville church, grass-roots opposition had begun to swell. Upon the opposition of the entire world, Jones had to retreat and he called off his plan. Although there were many protests some of which had injuries like in Afghanistan, there have been nice initiatives to lessen the bad affect of current anti-Islamic hatred activities. One of them is Muslim Education & Outreach Cambridge, MEOC’s. They launched a new initiative and is one of the first and best peaceful reactions ever in this matter. MEOC publicized their campaign to broaden the scope of understanding Islam in Cambridgeshire.

9/11 is still a source of pain for Muslims as well as the victims of those sorrowful attacks tens of times denounced by the entire Muslim world including senior scholars, clerics, leaders and communities. It is totally against the message of Islam to harm innocent people, and even after all the clarification made by theologists, the images reflected on the mass media have ruined some minds and some still say that the source of 9/11 is Islam. After confessing that he had never met a Muslim nor had any relations with Muslims personally, the mastermind behind “Burn a Quran Day”, controversial Pastor Terry Jones has shown that he does not have reliable knowledge about Islam when he talks about the “imam” calling him as “iman”. The reality was revealed in the CBS interview that the most of his knowledge about Islam is from YouTube videos. Upon those unreliable videos most of which were recorded by racist hate speech makers and anti-Islamist groups or individuals, he had written a short sided and biased book on Islam last year.

Luckily not everyone is the same and as radical as Terry Jones. Many Christians still protest him and are angry with him as he misrepresents Christianity like what Osama did to Islam. Except for anti-Islamic bigotry, people are open-minded and ready to read and experience the tranquillity and tolerance within Islam. Thus, some are to help Muslim volunteers, at least they are not uneasy about listening to what Islam is. Having read the Islamic world’s informative and denouncing messages of the violent activities and the unity against terror crimes, people are more encouraged to learn Islam and nowadays have more opportunities to learn the truth. While people are ready to listen, less Muslims march, shout and yell on to those Islamophobes which does not make things better. It is very well known that it does neither supply a desirable PR for Islam nor a solution for the unfortunate defamation to fire down any symbols or flags. At this very point arises the crucial question, what must be done? We tried to find the answer in Cambridge and found a unique and applicable answer from the volunteers of Muslim Education & Outreach Cambridge (MEOC).

So, our responsibility as Muslims is not to worry about the Quran disappearing off the face of the earth, as that won’t be happening. Our responsibility is to be good representatives of the Quran by being well-mannered and to share its message with the rest of humanity, so that they can make an informed decision about Islam and Muslims.

Instead of feeling distressed by the “Burn a Quran” events being organised in some places, or reacting angrily in a way that could make matters worse, we should take positive action, by participating in the “Buy a Quran and Seerah for Libraries” project for example.

This project was launched just a couple of days weeks ago in the city of Cambridge, and has received so much support and excitement from the Muslim community and the County Library that it could well be expanded to libraries nationwide insha’Allah.”

Don’t miss the opportunity to contribute directly by visiting the project’s website, or by sharing this information with your friends, and do not forget this: “The one who indicates the good is like the one who does it.”

MEOC initiative’s Muhammad Faisal quoted: “Libraries are one of the most important places curious non-Muslims turn to when they want to learn about Islam and Muslims. So it is our duty as the Muslim Community to ensure as much as possible that the libraries stock reliable books on Islam and Muslims – especially good translations of the Qur’an and Seerah of the Prophet. Unfortunately the situation is not so at the moment. Therefore Muslim Education & Outreach Cambridge (MEOC) has partnered with the Cambridgeshire Libraries to supply them as donation copies of a reliable translation of the Qur’an and a good book of Seerah. They have agreed to commemorate the occasion and even promote the books to their customers in the 42 public libraries in Cambridgeshire.

Apart from the public libraries we are also planning to approach school, prison, hospital, care home, police, fire services and other public services libraries in Cambridgeshire and neighbouring regions to stock copies of Qur’an and Seerah.”

Among others, this is one of the most significant but silent projects ever made to combat Islamophobia in the grass-roots. Upon questions raised in people’s minds, there will be more demand for it and, of course, mayhap they will find more on Islam’s real message beyond images reflected on media. Islam will be turning back to real owners from the hijackers. Henceforth Muslims’ answers must be basically on the intellectual level. Peaceful projects like “Buy A Quran Day” will certainly contribute a lot to the alarmingly needed presentation of real Islam and help better understanding and those must be supported.