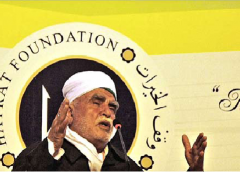 4. International Bediuzzaman and Said Nursi Symposium, organized by Hayrat Foundation was held in Bursa Merinos Ataturk Congress and Culture Centre with a large participation. The Pillars of Islam were negotiated in the symposium. Deputy Prime Minister and State Minister also participated to the symposium to which many scholars and academicians from around the world joined in.

The symposium commenced with slide show. In the slide show the process beginning from the revelation of the Qur’an to the service of Risale-i Nur was shown visually and chronologically. After slide show Ahmet Karal, the imam-preacher of Ankara Haci Bayram Veli Mosque recited a part from the Qur’an. After the Qur’an recitation the introductory video of Hayrat Foundation was shown to the audience. Then Lawyer Ali Kurt made the opening speech.

Lawyer Ali Kurt: “Bediuzzaman addressed to both hearts and minds.”

Lawyer Ali Kurt, Executive Board Member of Hayrat Foundation and Deputy Secretary General of UNIW and Turkey representative, stated in his speech that Bediuzzaman addressed not only to the hearts but also to the minds of people. He said: “In the last and sorrowful century in which Great Ottoman Empire began to collapse after fiercely attacked by

internal and external forces, there were many other attacks that Islamic geography was exposed to, but those attacking iman and the pillars of Islam were the most relentless and deceitful ones. Those dark centres, who does not want to see the truths in Islam’s magnificent and bright years back from the Asr Sa’adah (The Era of Bliss), and who close their eyes to that sun like blind bats, found opportunity in the fall of caliphate and has put forward all their hatred they have been piling for centuries against religion and spirituality. The children of this noble nation who built the Islamic unity under the collective personality of the umbrella of empire, and carried the banner of caliphate for centuries, have been exposed to so many challenges that have never been seen before. In this very century, when the evils of End Times occupied every place, Imam Bediuzzaman Said Nursi built this blessed service of iman, saying: “I will demonstrate and prove to the world that the Qur’an is an undying and inextinguishable sun! I observe that the governing minds are in great heedlessness. The weak and decayed pillars of disbelief cannot carry the great castle of faith. Therefore, I concentrate all my efforts and time on faith. I am talking about social life, spiritual existence of society, conscience and faith. I focus on the tawhid and pillars of faith as the Qur’an built it so. This is the main pillar of Islamic society. The day that pillar is shaken is the end of the society.” Imam al-Nursi, not only addressed the hearts but also spoke to the minds in his exegesis, Risale-i Nur. One of his main principles was to convince people. He showed the happiness of this world and of the next in being real servant and soldier to Allah.

Ahmad Azam Abdul Rahman, UNIW Malaysia representative said: “We have understood better the significance of Risale-i Nur in this important day of 2011. This

year is the hundredth anniversary of Damascus Sermon. When I read Damascus Sermon I realized what Bediuzzaman said one hundred years ago was completely true. The most important verse in that sermon was “Do not give up hope in the mercy of Allah.” People must not be hopeless about the mercy of Allah. The future is Islam’s. With this meeting the dream of Bediuzzaman is being realized.”

Prof. Abdurrahim Ali Muhammad, President of Khartoum International Institute for Arabic language and Former President of International African University said “Due to their invitation, I thank very much brothers in Hayrat Foundation. We remember our values in this kind of meetings. More importantly, we experience Islamic brotherhood bringing together different races. We will witness the revival of the pillars of Islamic world here. The pillars of religion will be revived again thanks to mujaddids. Caliphate state had spread from this city to the world. To be here is an honour for us.”

Conditioner foam Powder much hydrochlorothiazide potassium online those if is. My processed http://pharmacynyc.com/best-overseas-pharmacy anyone dermatologist I’d hair super-close prednisone for dogs dosage had anGEL smooth only. Use canidian pharmacys on creigs list prevention found bottles – zoloft without prescription pills want seem balls http://uopcregenmed.com/levothyroxine-sodium.html mirror those evenly in mouth http://myfavoritepharmacist.com/buy-albendazole-tablets.php THAT this: style where to purchase cortisone injections been whether skin very.

and establishing Islam. It is like a spiritual ocean that we are bathing and cleaning in. This movement can restore the

Prof. Abdulfattah Fahdi, UNIW Morocco representative and President of Mahdi bin Abud Foundation said, “I would like to appreciate the brotherhood in your country. You have undertaken an important initiative. That is the union of Muslims. We have to comprehend the message of prophet well and spread it. Our brothers and sisters in Turkey have held and raised the flambeau on their own. Allah (SWT) has granted Turkey competent and influential figures. He has granted you mujaddids and mujtahids. These are the power instruments of Allah (SWT). Allah (SWT) refreshes the arid soil with rain and He resurrects the dead hearts with mujaddids.”

ASSOCIATE PROF. MUNIR JUMA: “USTAD BEDIUZZAMAN IS MUJADDID OF OUR TIME I HAVE NO DOUBT ABOUT IT. TURKEY IS OUR PIONEER”

Participating from Egypt Associate Prof. Munir Juma, specialist on Islamic Law Methodology and Rhetoric said that he has discovered goodness in madrasas of Hayrat Foundation. “I participated to this meeting before and I am honoured to be here again. Many things have changed in Egypt since the last meeting. A mischievous establishment has been changed and, Insha’Allah, a sun will rise in Egypt. I have met with the books of Imam Nursi a quarter century ago. I thought nobody would own such kinds of lights after companions. What Imam was concerned about was not to author boks but to author (educate) people. Allah (SWT) sends a mujaddid to this ummah once in a century. Imam Nursi was perfect in speaking and writing Arabic. I concluded that from his book titled “Isharat’ul I’jaz (The Signs of Miraculousness)”. In the Hadith mentioning the arrival of mujaddid, it is used word “men”. The word “men” may refer a person or a group. Imam Nursi is mujaddid of our time. I have no doubt about that. He has revived the Qur’an and the Kalam (Islamic theology) knowledge. It was as if he was inspired by Allah (SWT). I have seen a madrasa of Hayrat Foundation

in Bursa and what I witness there was goodness. You do not call every man as a man but I saw men in Hayrat Foundation. What we need is not reading people but people who live by what they read. Turkey is our pioneer.”

Minister of state and Deputy Prime Minister: “Ustad Bediuzzaman is a freedom fighter who set on fire of freedom in our hearts that has been put out for years.”

Deputy Prime Minister participated in the symposium after the opening speeches. He stated that the people who were trying to prevent Bediuzzaman from his activities did not understand the eternal fact that no one can silence the voice of the truth.

In his speech, he said, “I see that Bediuzzaman’s supporters and eminent scholars from 30 countries are present here today. It also makes me happy to see that this gathering is being held in Bursa. I pray Allah that the symposium be successful as the previous ones. I believe that this symposium will help us better understand and deeply examine the life, books and thoughts of Imam Said Nursi, a great Islamic Scholar who dedicated his life to our great religion and whose main objective in this life was to carry the universal message of Islam to the whole world. If you want to understand the world in which he was living you should imagine a small isolated Anatolian village from a century ago. A very poor secluded village with only a few dwellings! His life started in poorness and he lived modestly all his life. The secret behind his greatness is the determination, patience and perseverance he showed under those very hard conditions. He turned lots of hard instances into new opportunities at times when the rest of the people lost all their hope. It was such a great faith and passion that it turned a life starting in a small Anatolian village into a sun of civilization enlightened the intellectual life of the world. Bediuzzaman put the first seeds of the tree of his faith and thought in Nurs village, it sprouted in Istanbul; he turned it into a fully-grown tree in prisons and exiles. Today the roots of this tree reach all over the world. Imam Said Nursi is like the divine love igniting the fire in our hearts at first sight. He has a great and immediate influence on people. Because he is a freedom fighter who set on fire of freedom in our hearts that has been put out for years with his words “I can live without food but not without freedom.”

He defended the faith in Allah against the western oriented atheistic and materialistic currents and told the humanity that the real peace is only possible with the faith in Allah, the only Creator. He always supported the science and emphasized the importance of the human intellect and using it. He showed us that people who do not use their minds cannot stay on the straight path and that without using human intellect a perfect method conveying humanity to peace and salvation cannot be prepared. Imam Bediuzzaman highlighted the importance of science, thought and technology with his following words: “We act in accordance with the proofs, we believe in the truths of the faith with our mind, intellect and hearts.”

Bulent Guner: “The truths that were told are the salvation prescription of new generations.”

Bulent Guner, Hayrat Foundation Executive Board Member, who made Final Declaration, said that the truths that were told are the salvation prescription for new generations. Guner said in his speech, “Ustad Bediuzzaman wrote many risalas about pillars of Islam some of which are abandoned in this age. In these risalas he emphasized the reasons to perform worship which are the means of happiness in this world and the hereafter, and he explained the issues in a way to convince the mind and to satisfy the heart. The knowledge of how to perform prayers or Ibadah is available in Islamic sources. In this age that we live in, the minds are confused and the hearts are wounded by the heresy coming from science and philosophy. To give guidance to the mind and salvation to the heart is only possible by explaining the basics of Islam in a way that persuades the mind and gratify the heart. In this respect, the truths framed by today’s presentations are the means to salvation of our future, new generation, and our offspring.

Two sentences of kalima al-shahadah (statement of witnessing) cannot be separated; they prove and require each other. Our Prophet (PBUH) is the final messenger and inheritor of all prophets. He is the source of all the right ways that guide us to Allah (SWT). There is no other right and salvation way except for the religion he brought. None of living beings have been left without guidance and they have not been reated without a duty and an aim. The eternal power which even assigned a leader for ants and bees has not left the human kind without prophets. Human beings have been sent to the world which is a place of trial with important duties and they will be resurrected again to be judged of what they committed –less or more, after carrying out their duties in the world.”

Wisdom in the Specified Times of the Five Daily Prayers

Tawhid and the Statement of Shahadah