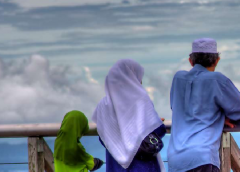 The topic of this article is Muslim family in the Balkans with a focus on Bosnia and Herzegovina. For the purposes of this article the term Balkans will be used to denote this region, although due to negative connotations that this term gained throughout the years the term Southeast Europe has become increasingly popular. Sometimes the term Western Balkans is used as well. Each of these terms for the most of the world include, with certain alternations, Albania, Bosnia and Herzegovina, Bulgaria, Croatia, Greece, Kosovo, Macedonia, Montenegro, Romania and Serbia, and this is how this paper will also use the term.

The Balkans is located in the Southeast Europe with a population of about 25 million inhabitants (Gallup Balkan Monitor, 2010). Some general issues depicting the Balkan countries are their common Communist past (without Greece), their geographical location being thought and presented as periphery of Europe, the economic and social transition that the countries are grappling with. Also the Balkan Countries have recently contained a striking number of latent conflicts. Genocide and ethnic tensions within Bosnia and Herzegovina, genocide cases between Serbia and Croatia and Bosnia and Herzegovina before the International Court of Justice, the conflict around Kosovo’s independence, Macedonia’s name dispute with Greece and many more (Gallup Balkan Monitor 2010). People of the Balkans today are trying to reconcile their multiple identities and find a way to live in these described complex societies.

The Balkans’ religious landscape is quite complex and in terms of Muslims it is possible to say that they by no means constitute a homogenous body of believers and this further complicates this multifaceted landscape (Öktem, 2010). Although it was also present in the region before, Islam definitely came to the Balkans with the Ottoman conquest. Approximately 9 million Muslims that live in the Balkans have linguistic, ethnic and theologi cal.3They speak different mother tongues (Albanian, Turkish, Slavic languages and Roma dialects). This linguistic diversity suggests a high level of fragmentation and an absence of a space of cultural continuity. There is no lingua franca, which binds the Muslim communities of the Balkans together. It would as Öktem suggests however, not be entirely exaggerated to argue that Turkish seems to be making a modest comeback at the level of Muslim elites, due to the educational resources provided by the Gülen movement, Turkish scholarship programmes, as well as Turkish state agencies such as TIKA and the Presidency of Religious Affairs (Diyanet)(Öktem, 2010).

These groups’ distinctiveness is shaped by their radically different positions vis-à-vis their respective home states, determined by whether they are minorities, majorities or pluralities, and whether they are discriminated against or welcomed by the majority. Additionally, one of the most important distinctions between these groups—and the hardest to represent

numerically—is the manner in which they make sense of their own religious identity. The religiosity/ secularity distinction cuts across the group identities mentioned above, but in different ways. For Muslims in the Balkans, ‘being Muslim’ means different things in different places (Öktem, 2010).

While Albania had been the only Muslim-majority country left in the Balkans after the collapse of the Ottoman Empire in 1912, this changed with the independence of Bosnia- Herzegovina in 1992 and Kosovo in 2008. Around six million Muslims live in Kosovo (predominantly Albanian with small Turkish and Slavic speaking populations), Albania (almost exclusively Albanian) and Bosnia and Herzegovina (Bosniak). Each of these countries has an approximate population of about two million Muslims. At least 700,000 citizens of Macedonia are of Muslim faith, most of them Albanians and to a much lesser extent Turks, Bosniaks and Roma. These groups constitute slightly less than a third of the entire population as a whole, and probably more. Significant Muslim minorities live in Montenegro and Serbia, particularly in the Sandzak. Even though Bulgaria’s Muslim population of Turks (and smaller communities of Slavic-speaking Pomaks and Roma) make up only 14% of the population of Bulgaria, they still amount to more than a million people. Among the smaller Muslim minorities, the mostly Turkish Muslims of Western Thrace in Greece deserve mention. They only account for 130,000 individuals, but are important in terms of Greek-Turkish relations and due to their particular legacy of Ottoman institutions.

As shown on the table below a specificity of the Balkan Muslims is also the hierarchical organisation of the official institution representing Islam in a respective country being headed by a Mufti or Grand Mufti which is not a very common practice around the world.

1.1. Family in the Balkans with a Focus on the Muslim Family

It is possible to state that in terms of the society and moreover family there are some general issues and problems that deserve to be mentioned. Transition in Central and Eastern Europe brought a number of changes that negatively affected the welfare of households in general. Apart from facing job losses, the decline in public sector employment, the growth of a largely unregulated private labour market and the rise in prices, individuals were deprived of a number of subsidies, family benefits, social protection and the centralised system of wage setting provided by the socialist system. In particular, individuals previously enjoyed free education, health care, fully paid maternity leave and paid leave for the care of a sick child (Smajic and Ermacora, 2007). Therefore, in terms of the societal set up most of the Balkans countries have a common Communist history. Therefore the problems they are facing now are the transition to market economies and the subsequent problems of higher unemployment rates and lack of necessary skills. All Balkan countries face large balance of payment deficits and decrease in foreign financing (Bugajski, 2010). Economic hardship, generating huge internal migration to urban settlements, is also resulting in frustrated youth and sometimes discrimination of minorities. Also these countries are very high on the list of countries with high level of organised crime and corruption. Democracy, human rights and gender equality presented as “new values” are shaking the grounds of a traditional patriarchal family in the Balkans influencing the gender role dynamics and the relationship between the family members (Stjepanović-Zaharijevski and Gavrilović, 2010). Post-traumatic stress disorder (PTSP) is present amongst the population of war torn countries as well as number of displaced persons, refugees and widows. Domestic violence is also increasing in the families of the Balkans with women being its victims and where accordingly, one in four ‘ever-partnered

woman’ has experienced physical or sexual violence (SEESAC, 2007). All this is attacking the family structure, which is quite unprepared to defend itself. Unemployed parents with no funds to support their families, single income households on the poverty line or too busy parents with no time for their children are Balkans reality. Young people disappointed and with less parent control turn to juvenile violence, violence and substance abuse.

Adding to all the mentioned things which the Muslim Balkan family is also suffering together with other families in general, there are particular issues that the Muslim Balkan family is facing per se. Muslims are struggling to understand their identity and to reconcile their national, ethnic, civic and religious identities which they do not all understand in the same manner. From the ones that see their Muslim identity only as a cultural heritage to the ones who organise their life according to Islam. Muslim couples additionally are having trouble in coping with the challenges of lifework balance, as well as with the issues of different understanding of Islam by spouses. Also due to changed circumstances in the traditional patriarchal family and women’s empowerment sometimes they are not able to cope with all the opportunities and obligations that modernity imposes nor willing to make changes in their lives. Also divorce rates generally and among the Muslims are getting higher. The position of the Balkan Muslims is mostly the one of the minority which is trying to resist the challenges of assimilation on one hand and consumerism and capitalism on the other. Public expression of religion, especially Islam is generally not very socially desirable and in all of the countries, there are public discussions about religious teaching in schools or the wearing headscarf. All these issues influence children and their self-confidence since their identity or the identity of their parents is mostly seen as the “Other”.