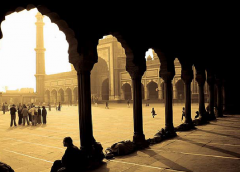 In a far distant country was an old man. During his lifespan, had he loads of opportunities to collect some money for his old age but he failed to do so. He was given bounty upon bounties, and richness upon richness all the way through his life yet he was unfortunate to spend in vain all his wealth due to his bad habits and friends and else. At the end of the day, he was in the red and had no wealth but owed money to many. He was trying to survive with little provision and had to pay his debts. Over the course of time, he understood that it was impossible to persuade people to prolong his debts anymore. He was broke and had no hope.

Once he was feeling low again prior to hearing the king’s announcement all over the streets. His majesty’s royal treasury was going to be publicized for thirty days in specific times for his subjects. The generous king wanted his citizens to collect coins from the treasury. When he heard the news he thought his ears was deceiving him, therefore he asked his neighbors and they confirmed. Yes, it was the time for him. His ears did not deceive him; the king wanted his subjects to take as much as they could from the treasury. The event was a once in a life time opportunity.

He was extremely happy and off he went. He informed his fellow unfortunate friends and invited them to the treasury to join him. The treasury was unbelievably open to fellow citizens and people were allowed to collect coins, but only in specific times. He had two options. The first way was to learn the rules, and delve directly into the treasury, collect as much as he could, and pay back his debts. The second was to ignore the open treasury event and do whatever he wanted. After long years of poverty and bad conditions of life, he made a wise choice and drew into the building. He once again asked his friends to come in but they were hesitant to go in. Apparently, the treasury was magnificent and it seemed not that easy to go in certain times, there were rules and regulations to collect the coins. At the end of the day, they decided not to.

The fortunate old man happily visited the treasury everyday in the very morning and went out in the evening. For thirty days, he collected a lot more than he ever thought of. He paid his debts and collected a remarkable amount of money to dwell nicely for such a long time.

Based upon this simple parable, one can understand that like this old gentleman, we are indebted; we have sins, we need to do a lot to be away from the hell fire and gain paradise. Fortunately we now have an excellent opportunity in thirty days of Ramadan. Allah (SWT) has bestowed us this month and gave us two ways, whether to go into the treasury of Ramadan, collect good deeds for our hereafter or ignore and wander around it.

The month of Ramadan is an unbelievable treasury for believers… If we spend those times at the uttermost care and more beneficial way, we then might be able to get rid of our spiritual debts, sins and shortcomings, besides we can gain new good habits during this month as well as marvellous good deeds. Ramadan is not only a period of time to pay debts but also a great opportunity to move forward and collect a lot. Now think that you are in the month of Ramadan, the Treasury of the Almighty King, and be ready to collect as much as you can. This is your month. This is your treasury. You can earn an eternal life. You have time, you have the potential. Use your mind and save your future.

Fasting as much as you can during the months of Rajab and Sha’ban will be better to get ready for Ramadan. Being spiritually high and ready is utterly important. Ramadan, the month of treasure, is ready and awaits you to collect as much as you can. If you do not know how to do it quickly and more practically, here are some easy tips for you… In order to get the maximum reward in this month try to share these tips with your friends and learn some others.

a) Techno Free Ramadan: Don’t forget, technology is the best time killer. Try to minimize your techno-related activities. If you are used to post on Facebook, have a short break or at least put 15 minutes time limit and try to spend less time on the internet and computer. Use your mobile on silent mode and decrease your chat and SMS on the phone. Inform your friends that you’ll be less active in this month.

b) Cooking: Try to cook something simple during Ramadan as this is a month of ‘ibadah & Qur’an, not a month of food. There are some husbands who push their wives to cook different varieties of food, or sisters have to spend their time in the kitchen due to many visitors. In any case, keep a tape of Qur’an, or a nice lecture from a respected sheikh in the kitchen, listen to it while you are busy in the kitchen, or keep your tongue moist with dhikr.

c) Shopping: Try to get all your shopping done before Ramadan if possible. Make a list of the items, that is enough for one month and buy it all together. If not possible, do your best to make shopping as fast as possible. Important notice: Try to do the Eid shopping before the last ten days. The last ten days of Ramadan when we have to be doing more ‘ibadah and spend our time in doing good deeds, some Muslims are busy with doing shopping for Eid and their kids. These ten days, we have to increase our ‘ibadah and to catch Laylat al-Qadr.

d) Iftar dinners: Iftar dinners are very common. One should be aware of what waste is and what dinner is. We have the rest of the full year to do parties and nice dinners to get socialized, we should not exaggerate them. Indeed it’s a great reward to break someone’s fast but try to give food to people who are needy and poor. The Noble Prophet (SAW) said,  Whoever gives food to a fasting person with which to break his fast, will have a reward equal

to his, without it detracting in the slightest from the reward of the fasting person.” (Reported by al-Tirmidhi, 3/171; Saheeh al-Targheeb, 1/451).

e) Sleeping: Decrease the time of sleep during this month. It’s a month of ‘ibadah and doing good deeds. Who knows, this could be our last Ramadan. Try to reduce your sleeping hours. It’s only one month and then you can get back to your normal routine again.

Now when we have cleaned up a big amount of time, let’s schedule it for ‘ibadah.

1) Fard: Pray the obligatory salah on time with khushu. Get ourself ready as soon as the salah comes in. Make du’a to Allah to give you khushu and try to get rid of all the thoughts and waswasa that come in the mind. Think that you are you are standing before your Lord Almighty.

2) Sunnah and make-ups: If you are already praying the 12 sunnah, continue them and add make up prayers. It is a nice time to make up previous missed prayers. If you have no make-ups then you can add 2 rak’ah of sunnah after dhuhr. [making them 14 altogether].

The prophet Sallalahu alaihi wasallam said, “Whoever maintains 4 rak’ah before dhuhr, and 4 rak’ah after dhuhr, Allah will make the fire Haram on that person” [Ibn-Majah]

Salat Al-Duha: Increase the numbers of Rak’ah if you are already in a habit of praying salat al-Duha.

3) Qur’an: Ramadan is the month of the Qur’an. Try to schedule all the moments you have. If you are working, try to keep a pocket size Qur’an with you and read it whenever you get the time, like, coffee break, lunch break, etc.

Try to read with reflection. Read slowly in a beautiful voice and reflect on its meaning. Try to read this time, with translation and tafseer.

3) Taraweeh and Qiyaam ul- Layl: Try to pray the taraweeh in the mosque where imams are doing long qiyam.

4) Tahajjud: Try to get up a little earlier to pray 2 rak’ah and make du’a. It’s the best time for making du’a and acceptance of prayers.

5) Du’a: Write all the du’a you want to make for yourself, your children, family, friends or any du’a that you want to make. Each day try to focus on it and keep on repeating

it throughout the day and at times when the du’a is more likely to be accepted. Find du’as

of prophets from the Qur’an; make du’a to Allah to give you ikhlas, khushu, and make du’a that you catch Lailat ul-Qadr. Make du’a for the whole Ummah. [repetition of du’a is  important especially during the last ten days of Ramadan]

6) Dhikr, Awrad, Durood: Select some dhikr, award and salawat for a day and focus on them daily, reflecting on the meaning of them. [get a Du’a book for detailed du’a and salawat]

7) Charity: Try to give as much charity as you can as the reward gets more during the month of Ramadan. Give food to the poor and the needy and help those in need. Last 10 days: Double and triple the amount of ‘ibadah you are doing during the last ten days of Ramadan.

Sleepless and worship more… Pray as much as you can and make a lot of du’a.