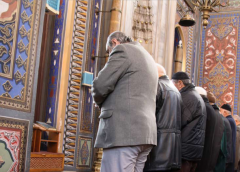 Performing Salat five times a day has been designated by the Quran and Sunnah.

“Verily, the prayer is enjoined on the believers at fixed hours.”1

There are many verses referring to the times of Salah in the Qur’an.

“So glorify Allah [above all that (evil) they associate with Him (O believers)], when you come up to the evening [i.e. offer the (Maghrib) sunset and (‘Isha’) night prayers], and when you enter the morning [i.e offer the (Fajr) Morning Prayer]. And His is all the praises and thanks in the heavens and the earth, and (glorify Him) in the afternoon (i.e. offer ‘Asr prayer) and when you come up to the time, when the day begins to decline (i.e offer Zuhrprayer).”2

These verses refer to all of five times prayers.

Prophet Muhammad (PBUH) performed Salah as five times a day with the guidance of Gabriel (PUH), and taught his companions that way. His practises in Asr al- Saadah are all in this way. Salah is always performed as five times a day in following ages. There is no scholar or mujtahid who expressed a different opinion on this matter. There is ijma of ulama on performing Salah five times a day. Aforementioned proofs from the Qur’an, Sunnah and ijma are enough to remove all the doubts and delusions.

Among the pillars of Islam, although the ibadah like Sawm and Zakah are compulsory once a year and hajj once in a lifetime; unlike others Salah is enjoined to be performed five times a day. This shows the importance of Salah, moreover it makes us perceive that the times of Salah have got special value as well.

Imam Bediuzzaman wrote a separate treatise named the 9th Word addressing this issue in order to put the value of Salah times and the meaningful changes at those times into consideration.

The Repetition of Ibadah is Necessary for the Growth and Strengthening of Iman.

The effect of ibadah on iman is an unquestionable truth. Ibadah can be performed thoroughly in proportion to the strength of iman. The practice of ibadah and its repetition provide making the pillars of iman firm in the minds. The importance of Salah repeated most as one of the pillars of Islam is evident with this respect. Imam Bediuzzaman touches upon the positive contribution of ibadah to iman in his tafseer named Isharatu’ul-Ijaz:

“In order to establish and ensure the obedience and submission to the commands and prohibitions of Allah (SWT), the greatness of the Creator must be based in the minds. And this is only possible with tenets, the manifestation of provisions of iman in other words. And the strengthening and growth of the provisions of iman are only possible with the ibadah  hich is renewed with repetition.”4

Salah Times are the beginning of Important Changes.

Bediuzzaman explains the importance of Salat times as follows:

Since each of the Salah time is the start of an important change, and the mirror of great Divine administration, and reflection of the great bounties of Allah (SWT) in this administration; in these important time periods, the Salah is commanded which means tasbeeh (to exalt) and tazim (to revere) Qadir Al-Zul Jalal and thank (shukr) for all the bounties between two of the prayer times.

Therefore, at those times when important changes occur, and great and general bounties are present in the magnificent Divine administration; it is necessary to praise (tasbeeh), revere (tazim) and thank (shukr). And this is possible with Salah, the index of all ibadah. For this reason, Muslims are commanded to perform prayer at certain times.

The Meaning of Salah explains the Wisdom of Salah Times.

According to Bediuzzaman, the meaning of Salah is,“ the offering of glorification, praise, and thanks  to Almighty Allah. That is to say, uttering Subhan Allah (Glory be  to Allah) by word and action before Allah’s glory and sublimity, it is to hallow and worship Him. And declaring Allahu Akbar (Allah is Most Great) through word and act before His sheer perfection, it is to exalt and magnify Him. And saying Alhamdulillah

(All praise be to Allah) with the heart, tongue, and body, it is to offer thanks before His utter beauty. That is to say, glorification, exaltation, and praise are like the seeds of the prayers. That is why these three things are present in every part of the prayers, in all the actions and words. And it is also why these blessed words are each repeated thirty-three times after the prayers, in order to strengthen and reiterate the prayers’ meaning. The meaning of the prayers is confirmed through these concise summaries.”5

The Salah having this meaning and essence is surely to be performed repeatedly at certain times of a day. The most appropriate times are fajr (early morning), zuhr (midday), asr (afternoon), maghrib (sunset) and isha (late evening).

Salah is the Index of all Ibadah.

In Qur’an Al-Azim the greatest haqiqah (reality, truth) after iman is the Salah. Just as the human is a small model/example of this huge universe, surah al-Fatiha is a luminous example of Qur’an Al-Azim; so too is the Salah a luminous index which comprises all kinds of ibadah, the pillars of iman and Islam being in the first place, of all creatures.

“Just as man is an example in miniature of the macrocosm, and surah al-Fatiha is a luminous sample of Qur’an Al-Azim, so too is the Salah a comprehensive and luminous index comprising all varieties of ibadah; and a blessed map showing all kinds of ibadah of all classes of creatures.”6

The wisdom in performing the Salah, being the summary and index of all ibadah, at the assigned times,  which are small examples in miniatures and mirrors of important time periods, is understood clearly. The Things that Salah Times Remind People Imam Bediuzzaman explains the importance and wisdom of the times prescribed for Salah with the example of clock exhibiting an original approach: “Just as the second – hand, minute-hand, hour-hand, and day hand of a clock which tells the weeks look to one another, are examples of one another, and follow one another, so too the revolutions of day and night, which are like the seconds of this world – a vast clock of Almighty Allah – and the years which tell its minutes, and the stages of man’s life-span which tell the hours, and the epochs of

Taking this example a measure, he explains how the times of Salah correspond to an’s life-span with respect to its being mirror to world’s life-span together with the meanings that the Salah times mean in a day, and what they remind:

“The time of Fajr, the early morning: This time until sunrise resembles and calls to mind the early spring, the moment of conception in the mother’s womb, and the first of the six days of the creation of the heavens and earth; it recalls the Divine acts present in them.

The time of Zuhr, just past midday: This resembles and points to midsummer, and the prime of youth, and the period of man’s creation in the lifetime of the world, and calls to mind the manifestations of mercy and the abundant bounties in them.

The time of Asr, afternoon: This is like autumn, and old age, and the time of the Final Prophet (PBUH), known as the Era of Bliss, and re calls the Divine acts and favours ofthe All-Merciful One in them

The time of Maghrib, sunset: Through recalling the departure of many creatures at the end of autumn, and man’s death, and the destruction of the world at the commencement of the Resurrection, this time puts in mind the manifestations of Divine Glory and Sublimity, and rouses man from his slumbers of heedlessness.

The time of ‘Isha, nightfall: As for this time, by calling to mind the world of darkness veiling all the objects of the daytime world with a black shroud, and winter hiding the face of the dead earth with its white cerement, and even the remaining works of departed men dying and passing beneath the veil of oblivion, and this world, the arena of examination, being shut up and closed down for ever, it proclaims the awesome and mighty disposals of the All-Glorious and Compelling Subduer.

As for the nighttime, through putting in mind both the winter, and the grave, and the  ntermediate Realm, it reminds man how needy is the human spirit for the Most Merciful One’s Mercy. And the tahajjud prayer informs him what a necessary light it is for the night of the grave and darkness of the Intermediate Realm; it warns him of this, and through recalling the infinite bounties of the True Bestower, proclaims how deserving He is of praise and thanks.

“Just as each of these five times marks the start of an important revolution and recalls other great revolutions, so too through the awesome daily disposals of the Eternally Besought One’s power, each calls to mind the miracles of Divine power and gifts of Divine mercy of both every year, and every age, and every epoch. That is to say, the prescribed prayers, which are an innate duty and the basis of worship and an incontestable debt, are most appropriate and fitting for these times.”9

“Thus, since each of these five times is an indication to a mighty revolution, a sign to the tremendous Dominical activity, and a token of the universal Divine bounties, the prescribed prayers, which are a debt and an obligation, being specified at them is perfect wisdom.”10

Tawhid and the Statement of Shahadah