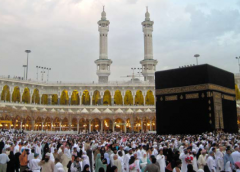 Hajj in Islam is fardh (compulsory) for every Muslim who is capable of and can afford it. Allah (SWT) orders in the Qur’an as follows, “Pilgrimage thereto is a duty men owe to Allah, – those who can afford the journey”. The phrase “can afford” in the verse shows that the hajj is fardh, unlike salat, only for those who are healthy enough and can finance it to do. That is one of the clear and nice examples of Divine Mercy’s preserving the believers from difficulties as indicated in the verse: “He has imposed no difficulties on you in religion”1

Additionally, the Qur’an points out the importance of hajj in the presence of Allah and how Muslims should strive to carry out this blessed duty stressing that hajj is a duty of man indebted to Allah. None of the believers wishes to go to the hereafter with a debt to Allah and they are honoured to pay this debt.

In many ahadith, Our Prophet Muhammad (PBUH) has encouraged the Muslims to perform hajj:

Comprehending the importance of hajj in the verses and ahadith, the Muslims for centuries have been going to hajj, sometimes on foot and saddle beasts, sometimes by ships in spite of all hardships. All the way from very far distanc even through the continents they have been trying to receive the blessings of hajj. A verse from the Qur’an encourages the believers to make hajj:

“And proclaim the Pilgrimage among men: they will come to thee on foot and (mounted) on every kind of camel, lean on account of journeys through deep and distant  mountain highways”4

After this short reminder on the importance and virtue of hajj, now let us take a look at the ideas of Bediuzzaman on hajj:

Imam Bediuzzaman points out two remarkable wisdoms of hajj, one concerning a believer’s individual world, and the other concerning the global Muslim ummah. When we analyze them, it is seen that there are two great benefits of hajj. First is the personal and the latter is social.

In his following sentence from The Words, Bediuzzamans explains the personal benefits of hajj for the believers:

“Hajj introduces his Lord to Hajji as if he is a saint and makes him enjoy lofty spiritual blessings.”

“Imagine that an ordinary soldier with no rank participates in a festival of a great sultan in sultan’s special day and receives his graceful presents. During that time of magnificent festival, he witnesses majestic ceremonies, shows and parades being conducted in the name of the sultan to which many people join. He attains generous bounties of the sultan. All these help and provide him to see the majestic rule of the sultan closer and understand and feel and like and enjoy it with a high awareness. By that way, he perceives that his sultan has a greater power and fortune than he assumed before. He begins to feel more solemnity, loyalty and love in the face of his lofty attributes.

In the same way; however a pilgrim (hajji) is a common man, he gravitates to his Lord during his hajj like a spiritually powerful saint. He comprehends that Allah is the Lord of the earth because he witnesses and fully feels that Allah whom he worships is not just his Lord but he is also Lord of the millions of the other hajjis who respond His invitation to worship. He sees that those millions of hajjis worship and pray to that unique Lord in their djellaba in Qa’abah al- Sharif, Masjid al-Haram, Muzdalifah, Mina and especially in Arafat and turn around the Qa’abah. He witnesses that they flow into Arafat and Muzdalifah like a flood of humans and stand in the presence of Allah and plead and pray in Arafat which reminds the Judgement Day.

When he realizes that truth he understands thoroughly that the Lord to whom he prays and worships is the Lord of all people and earth like a wali knows. As it is declared in a verse enjoining the hajj “That they may witness the benefits (provided) for them”5 he receives lots of spiritual benefits and graces. In return of that awareness and realization he begins to feel and experience the like of the pleasures and states that the awliyas experience and he takes great spiritual pleasures.  Experiencing hajj, he himself confirms that the truths he believes are not only comprised of truths based on reason but they also help him attain spiritual happiness and pleasures even in this world. By this way, his belief immensely strengthens.

And a lot of reflections and manifestations such as wide circles and meanings of servanthood and worship, and the ranks of greatness, lordliness and sovereignty of Allah (SWT) inspired into his heart and mind in those places cause him develop to feel jubilant feelings in his heart such as spiritual enthusiasm, wonder, awe and solemnity to develop.

What will tranquillize and alleviate, and announce the enthusiasm by his sublime feelings is but the words “Allahu akbar, Allahu akbar.” That’s why people say “Allahu akbar” so frequently in the hajj. In other words, the sublime and spiritually enthusiastic feelings and pleasures attained during hajj are pronounced with Allahu akbar and the fires blazing in the spirit are alleviated by Allahu akbar.

Turning back home, hajjis who enjoy these lofty and sacred pleasures in the hajj feel greater and stronger excitement and enthusiasm to be a better servant of Allah, try their best to attain Allah’s love, appreciation and tries to please Him and not to stray from the straight path.

The second point that Imam Bediuzzaman Said Nursi makes about hajj is its contribution to the unity and solidarity of Islamic world. His explanations on that point in his book “Sunuhat” are as follows:

“The Muslims from different races who come from throughout the Muslim world on the occasion of hajj find the opportunity to get to know each other and different Islamic cultures. By the result of these occasions, intellectual togetherness and agreements are reached and solidarity and acting cooperatively among Islamic communities are provided. And that is a wisdom which is a transcendent Islamic politics and concerning Islamic societal life that Allah put on the hajj worship.

Bediuzzaman says that hajj has been neglected in recent centuries and this damaged the great politics of Islam and the Islamic unity. Due to this negligence, Muslim relations within each other have weakened in the course of time and it allowed the clashes among Muslims provoked by enemies of Muslims. That the Indian Muslims were brought to Dardanelles to fight against Ottomans by British in World War I and Kazakh Muslims are used against Ottoman army by Russians in east frontier are tragic examples of that grave situation.

Imam Bediuzzaman concludes that it is a divine punishment caused to Muslims that they are forced to make longer journeys and fight against their brothers under the flag of enemy due to their negligence of sacred journey of hajj, and the Muslims need to draw lessons from that saddening picture.

Imam Bediuzzaman points out two great benefits of hajj concerning the individual and social life. Performing hajj duty gains the individual higher servant awareness and helps get to know our Lord, and it provides the Muslim communities get to know each other closely and strengthen unity. Al-Nursi has proved that hajj should never be neglected, by showing these two vital wisdoms behind it and by that way he has encouraged Muslims to perform hajj duty.
1. Hajj, 78