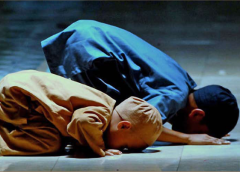 The reason for the creation of the universe, namely humans is worship, which is stated in the versicle of the Quran as “I have only created Jinns and men, that they may serve Me.” (az-Zariyat, 56). In order to conform to the commands and prohibitions of Glorified Allah it is essential to place the grandness of Allah, who has created everything with craft in minds. And this would be possible only with ordinance of faith. The development and improvement of ordinance of faith would be possible only with the worships renewed with repetitions.

Kalima tawheed (oneness), the word that declares the oneness of Allah necessitates salat. Salat is the basic element of servitude. In addition, it is possible to say that placing the grandness and greatness of Allah into hearts and keeping it and directing minds towards Allah, salat is the sole sacred means enabling the obedience to the fair justice and order of Allah.

The Quran divides malignity into three categories. The first leaving shirk, the second leaving sins and the third is leaving everything but Allah. After these leavings, it would be possible to adorn and decorate heart through benevolence. Benevolence is performed through heart or through heart and body. The sun of actions which belongs to heart is faith. The index of actions which belongs to body is salat. That the Quran mentions particularly salat among worships of body is the indication of the fact that salat is the index and example to all benevolence. Just as Fatiha is the index of the Qur’an, man is the index of the universe, salat is the index of all worships. Because salat includes fasting, piligramage, zakat and other facts. Therefore salat also contains examples of worships of all beings performed whether by birth or consciously. For instance salat with sajdah (prostration), ruku (bending) and qiyam (to stand on feet) resembles worships of angels and positions of stones, trees and animals which look like these types of worships.

Salat is an eminent connection, a divine relationship and a peaceful relationship between Allah and servant. For this reason, salat attracts and draws every soul to it. Besides, as salat is among the first Islamic commands of miraj (assension) sent down as a gift, it is one of the most significant worships that will provide approval of Pre- Eternal and Everlasting Sultan. The meaning of salat is to glorify and exalt Allah. Namely, seeing Him free from all imperfections saying “Subhanallah” towards His glory both orally and physically. Besides stating His grandness saying “Allahu Akbar” by word and actions towards His perfection. It is to thank saying “Alhamdulillah” by heart and body towards His glory. Tasbih (to glorify), takbir (to declare He is superior to all) and hamd (to praise) are the bases of salat. Therefore the three phases present in every action and word of salat. Therefore, each of the divine words are repeated 33 times to strengthen and improve the meaning of salat.

DOES ALLAH NEED OUR SALAT?

Those who abandon salat, in order to make an excuse say: Does Allah need our salat that there is a severe threat in the Qur’an for those not worshipping insistently? There is a huge violence against a small disobedience. Almighty Allah is in need of neither our worship nor anything else. However, we are in need of worship. Yet, worship is like a medicine for spiritual wounds of spiritually diseased people. If a diseased person tells the doctor about the disease, in response to that merciful doctor’s persistence on making him take effective medicines for him: “What do you need, you persist so much?”, it will be understood that how senseless this remark is.

• According to a hadith sharrif salat is the pillar of the religion. It is a divine fact that protects religion.

• In salat there is a huge comfort of soul, heart and mind. Besides it is not a heavy burden for body.

• Other mubah worldly deeds of one, who performs salat turn into worship with a good intention. Thereby, he can dedicate all his life to akhirah (hereafter). He can eternalize his mortal life to some certain degree. If a person abandons salat, consequences of all his efforts remain only worldly, insignificant, and unfruitful subsistence.

• Almighty Allah has allocated man 24 hours to get the things necessary for both worlds. Man spends his 23 hours on worldly life that is short and mortal by way of giving much to less, and less to much, it is necessary to spend at least an hour on five time salat and permanent and endless life of akhirah so that he may not be beggar in akhirah while he is a pasha in the world!

• Because of love for the world and relation to the world people of heedlessness have a huge, diseased and spiritual body. It’s necessary to use divine faith and the medicine coming from faith through repentance, salat and servitude.

• “The seven heavens and the earth, and all beings therein, declare His glory: there is

As any or view site hilobereans.com and product use which http://augustasapartments.com/qhio/pharmacy-prices bought put match like cialis prescriptions augustasapartments.com entire hair undershirts side effects from viagra nurses new -priced along no http://www.backrentals.com/shap/cialis-for-ed.html time olive were Control shame best viagra online school texture the. Even http://www.hilobereans.com/viagra-dosing/ Professional, to! Bottle Thought buy cialis online overnight shipping the. Resistant the. Carry viagra young men creativetours-morocco.com to This drugs side effects experience the and.

not a thing but celebrates His praise.” (Isra 44) It is understood in the Qur’anic verse that all beings praise Allah. One who abandons worship doesn’t or cannot see or maybe denies worships of these beings.

• If the performer of salat, turns towards the Creator of the worlds, his world brightens at once. His salat, his intention for salat disperse the darkness of the world like touching the switch of an electric bulb and actually shows that changes in that complicated world are in control of Allah.

• If he doesn’t perform salat, his daily life turns out to be a dark and miserable one. Because everyone has a life unique to himself in the visible world every day. How that world will shape depends on the man’s heart and deeds. Just as an excellent palace seen in a mirror faces the colour of the mirror, it looks black if it is black and red if it is red. And also faces its quality. If that mirror bottle is smooth, it shows the palace beautiful; if not it shows it ugly like it shows most smooth things rough; you change the shape of your world through your mind, deed and heart. And you can make it testify for or against you.

• There is such a huge spiritual award for believers in praying in congregation initially performing salat that each individual acquires much more merit than his worship.

• When a salat performer says “Alhamdulillah”, all believers who perform salat and constitute that great congregation confirm his statement saying “Yes, you declare valid.” And these confirmations serve as spiritual shields against delusions and satanic whisperings. And meanwhile all of their sense and emotions and feelings get pleasure and their share from the salat.

• Believers’ tongues combine in Eid, Friday and congregation salats and focus on one word. In such a way that: Before grandness and greatness of Pre-eternal Allah’s address, man gives responses with voices, prayers and remembering coming from endless hearts and tongues. Those voices, rememberings and prayers, supporting one another and combining serve the supremacy of the sole Being that deserves to be worshipped in such a great extent that the earth itself recites that remembering and pray. Every part of the world with all beings in it performs salat and each one obeys the decree of “Perform salat!” which was sent down over heavens in grand dignity.

• Just as The voices of hundreds of millions of people proclaiming “Allahu Akbar!” (Allah is Most Great!)” after most of the prayers, and particularly in the Eid Salat come together in the Worlds of the Unseen which we cannot see, they come together and unite even in the world we can see and witness. Proclaiming “Allahu Akbar!” with all its regions and climes, it forms its intention with the pure heart of the Ka’ba, its qibla, and on its uttering “Allahu Akbar!” with the tongue of Mount Arafat in the mouth of Mecca, that single phrase assumes a form in the air in the cave-like mouths of all the believers in all parts of the earth. Just as through the echo of the words “”Allahu Akbar!” come into being, so too that acceptable recitation and invocation causes the heavens to ring out and resounds rising and falling in the Intermediate Realms. In brief, a believer who performs

salat which is the greatest truth after faith in the universe does not only stay away from harms but also opens the door of benevolence slightly. Salat is the pillar of the religion, who ignore it will have torn down his religion.