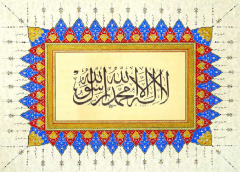 Tawhid is to profess the oneness of Allah, to know him The One only, that is the unification of the existence of Allah. It is to believe that He is al-Malik, the sovereignty upon all. Everything belongs to Him. It is to believe that with His limitless power He administrates and directs any being from the tiniest atom to the greatest planet. It is to accept that He is the Razzaq of all beings from the solid and lifeless beings to human beings “Ashraf al-Makhluq” (the most honoured of all creatures). “It is to accept that Allah creates everything suddenly and abruptly and in the most suitable time with the command of “Kun” meaning “Be”. He is going to take our lives and resurrect them in an eternal realm. It is to submit to Him who will listen to and reply those physical and oral prayers of conscious and unconscious beings’ with no negligence and He will grant them His mercy and benevolence both in this world and the hereafter.

The Holy Qur’an from the very beginning to the end declares the truth of “La ilaha illallah” with every single verse.

Along with verbal ayats (verse, also means sign) in the book of the Qur’an derived from the kalaam sifat of Allah, there are material ayats in the book of universe as well. Those verses address the senses of basar (sight) and basirat (sense of feeling the truth by heart). Those verses increase the imaan of those awakened hearts and make them say in every heart beat. Provided that they leave their obstinacy, those hearts perplexed in the darkness of ghaflah (misguidance) are impelled to submission. Furthermore, “The Noble Qur’an is mercy to all people. As every individual has their own world of dreams, for their own disposition and style there is a specific Qur’an which they understand and quote from the Qur’an. It educates their spirit and heals their heart.”

The Holy Quran, which is the interpretation of tawhid from the first surah al-Fatiha to the last surah an- Nas, in many ways teaches us “La ilaha illlallah”. Sayyidul Ayat (master of the verses) is the Ayat al-Kursi and even it does address by saying “La ilaha illallah”. And proving the tawhid in ten different levels in various colours, it strictly cuts off the intervention of any others with the sentence of “Who is he that can intercede with Him except with His Permission?”

This truth is explained by Imam Bedi’uzzaman Said an-Nursi as follows:

“Because the basic quality of hakimiyyah (sovereignty) is being completely independent and the one and the unique. Even a weak shadow of hakimiyyah (sovereignty) can be seen in powerless human beings. In order to preserve their independence, they reject any intervention and do not want anyone to interfere with their business. As for this fundamental attribute, and hakimiyyat-i ilahiyya (the divine sovereignty) is as severe as the rububiyat-i mutlaqa (the absolute Lordship of Allah), The Quran of Miraclous Disposition shows the tawhid feverishly and repetitively, and with great threats it rejects the shirk (the establishment of “partners” placed beside Allah)”

Universe and the Holy Qur’an. Both are the books of Allah and they tell about the the One and only Creator of the universe in their own words. The Quran with its inimitable verses shows the the divine zeals, holy indication on the magnificent beings in the universe to the people of understanding:

The Noble Quran says to those people who reflect on the verses:

“It is to believe in a similar certainty to shuhud (to know and believe without suspicion, as if witnessed) that everything is made through his power of hand, and that there is none alike him in his uluhiyyah and rububiyah (his divinity and Lordship), that there is no sherik (partners) or helpers in his Majestic Kingdom, and is to attain hudhur dāimī (the permanent awareness of god consciousness).”

In every being, are dalail (proofs) showing the existence and oneness of Allah. But those instances of proof are depended on the educational ability of man,  contemplation and practice. Thus, the zahir (clear) verses may be hidden for those who fall short of tafakkur (contemplation).  That is, every will help them to level up those maratib degrees).

In the hadith qudsi, Allah Subhanahu Wa Ta’ala says: “I was a hidden Treasure and desired to be known; therefore I created so that I might be known”. Allah (SWT) sent anbiya (prophets) and rusul (messengers) to make Himself known, to tell the goal of creation of the universe.

Divine power did not leave the ant without a leader, or bees without a queen; He surely would not leave mankind without a prophet and he didn’t. “Nubuwwah (Prophethood) is the basic of the goodness and perfection within human beings. It is the summary and index of the righteous religion and happiness. All the husn (beauty), khair (goodness), fayz (enthusiasm) and kamalat (perfection) are from Him. Dhalalah (misguidance), and khasarah (destruction and damage)are from the opposite side. ”

Ustad Bediuzzaman explains the fact that many prophets, who could tell us what Allah (SWT) wants from his servant, were sent at the beginning whereas there is only  one prophet in the end:

“Compared to the time of the Prophet Muhammad (ASW), in the previous nations and ummat, there were significant differences and huge distance between followers of former religions in terms of moral,  aterial and educational capacities. Thus, a single education type and personal invitation were not enough. In the course of time, people have been awakened by the sun of happiness of the Era of Saadah and with consultation and sharing ideas, leaving or changing traditions, or with mixing nations, they tended to unite and started to transport and communicate. Even the globe became like a single country, even  a village. One invitation and a single nubuwwah (prophethood) have been regarded sufficient by Divine Destiny.”

With the expulsion of Sayyidina Adam (alayhissalam) from the paradise, human kind’s life journey starts. In the course of time and passing ages, humanity’s capacity and potential as well as intellect and understanding have increased, and in the end they have been honoured  with the highest level of perfection, the religion of Islam.

Allah the Most High has made Muhammad – sallallahu ta’ala alayhi wasallam – a Rasul (messenger) and a guide. Muhammad (saw ) is the one who is the most worthy of speech of Allah, with the consensus of friends and foes has the most able potential and the most beautiful character. He is the one whom one in five of humanity adhere to, and half of the world have been under his spiritual command. He is the one, who enlightens the past and the future, whom people pray five times a day and send salutations to, and renew their submission to and pledge allegiance every time. He is the one “sent as a mercy to humankind.”

As there is an Ism al’Azam among the names of the Creator of all beings, there must be a perfect individual amongst His creatures and he would combine the perfection of the universe on him. And this individual is both the seed and fruit of the universe, the root and the leader of the chain of 124 thousand prophets, and He is the prophet whose name was mentioned in Torah as “Ahyat”, “Ahmad” in the Bible and “Muhammad” in the Quran. He is our Prophet Muhammad (ASW) and his prophethood has been witnessed and testified by every created being in their specific languages.

TWO PARTS OF THE STATEMENT OF SHAHADAH WITNESS ONE ANOTHER

Al-Burhan al-inni: The mode of reasoning which proceeds from effect to  cause. e.g: One may know that there is fire after observing the smoke, or see a building and understand that building has an architect. They are certain indications. In the statement of shahadah, second phrase is al-burhan al-inni (clear indication) of the first. That is, Muhammad (alayhissalatu wassalam) is the indication for Allah. And sometimes, up in the sky.

Al-Burhan al-limmi: The mode of reasoning which procees from cause to its effect. e.g: When we see fire in the darkness of night, we know that there is smoke even if we cannot see it right now.” Likewise, the first part of the statement of shahadah is burhan al-limmi, that is, Our Lord is an indication to Muhammad Alayhissalatu wassalam. That is the phrase requires. One shows and proves the other.

Allah (SWT) the All-Wise sent prophets and books to gradually developing humankind as a response to their necessities. The chain of prophets and religions concluded with Islam.

Allah (SWT) say in the Glorious Qur’an: “The Religion before Allah is Islam”. And the verse: “Whoever seeks as religion other than Islam, it will not be accepted from him, and he will be a loser in the Hereafter.” shows that after the emergence of Islam if those of previous religions do not submit to Islam, they will not be among those saved. The prophet of Islam is Muhammad (ASW). As he is the final messenger and seal of prophets, he is the successor of all prophets and he stands at the beginning of all ways of accession. Indeed there hasn’t been any and there will be no way of truth and of salvation other than his great way.

“O humanity! It is impossible to find out the way of peace and happiness without taking the Prophet Muhammad (SAW) as the model. Above all, whoever rejects Habibullah (SAW) will not be the recipient of any enlightment and will not be acknowledged and it will be impossible to know Allah.

Wisdom in the Specified Times of the Five Daily Prayers