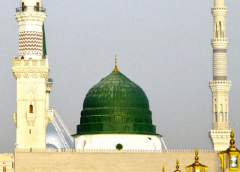 The lexical meaning of Shafa’ah

Sayyid Sharif Jurjani says the following in Tarifat: Shafa’ah is to demand forgiveness for major sins.

Tahanawi says it is “a request to attain a good situation or to get rid of harm by way of invocation.” (Kashshafu Istilihatu’l-Funun / 1st Volume / p: 1034)

The translator of Kamus-u Muhit states: according to what the author states in Basair, it means (شفع) (شفاعه), a helper, an assistant or to ask forgiveness for and on behalf of the sinner.

In few words, shafa’ah means to seek help, wish something for somebody and to intercede.

When we use the term nowadays, shafa’ah means our Prophet’s making dua for his Ummah and his request to Allah (swt) so that his Ummah is forgiven on the Day of Judgment.

Deniers of Shafa’ah
As is well known, the only sect in the history of Islam that has denied the existence of the shafa’ah of our Prophet (saw), or other Prophets’ shafa’ah for their communities on the Day of Judgment, is the Mutazila sect. Ahl’al Sunnah ulama (scholars) refuted and disproved the ideas of this deviant Mutazila sect with both rational (aqli) and narrated (naqli) evidences.  Similarly nowadays, we encounter people who deny shafa’ah like the deviant sect, or people who suspiciously or out of curiosity ask questions about the subject of shafa’ah . We will do our best to shed light on the subject, mentioning the ayahs and ahadith about shafa’ah.
Shafa’ah on the Day of Judgment:
We can separate the people who will gather in the judgment field into three:

Those whose sins are more than their thawab who deserve jahannam even for a short time;

Those whose thawab are more than their sins who deserve Jannah.

Then will no intercession of (any) intercessors profit them. (Muddaththir, 74:48)

As to those whose thawab are more than their sins that deserve Jannah, they don’t need shafa’ah after all, since they deserved it already.

As to those whose sins are more than their thawab that they deserve jahannam. There are so many expressions in ayahs in the Qur’an and in a lot of ahadith mentioning that our Prophet (or some other prophets) will intercede (in other words do shafa’ah) for the forgiveness of some of those people.

We will now mention the ayahs that are proofs of shafa’ah:

“On that day no intercession availed save (that of) him unto whom the Beneficent hath given leave and whose word He accepted.” (Ta-Ha, 20:109)

No intercession availed with Him save for him whom He permitted. Yet, when fear is banished from their hearts, they say: What was it that your Lord said? They say: The Truth. And He is the Sublime, the Great. (Saba, 34:23)

And those unto whom they cry instead of Him possess no power of intercession, saving him who beareth witness unto the Truth knowingly. (Zukhruf, 43:86) (These exceptions here are Prophets ‘Isa (a.s) and Uzayr (a.s) and the angels.)

And how many angels are in the heavens whose intercession availed naught save after Allah giveth leave to whom He chooseth and accepteth. (Najm, 53:26)

He knoweth what is before them and what is behind them, and they cannot intercede except for him whom He accepteth, and they quake for awe of Him. (Al-Anbiya, 21:28)

In these ayahs, Allah does not say that “There will not be shafa’ah”, but rather He says, “Those whom Allah chooses and accepts will intercede”.

So know (O Muhammad) that there is no God save Allah, and ask forgiveness for thy sin and for believing men and believing women. Allah knoweth (both) your place of turmoil and your place of rest. (Muhammad, 47:19)

The command given to our Prophet (saw) in this ayah “…ask forgiveness….” is a sign that Allah (swt) will accept the du’a. Because Allah does not break His word and reject the du’as after He says “ask forgiveness.” It does not make any difference if this seeking forgiveness du’a is for this world or not. It would be very wrong and a false assertion to say, “It is only for and in this world”.

What is meant for the Prophets’ shafa’ah on the Day of Judgment is their interceding for the forgiveness of their Ummah, making dua for their community so that they can attain the pardon of Allah. We have already mentioned above that the word ‘shafa’ah’ means to make du’a and to intercede. Claiming that Prophets would not make du’a on the Day of Judgment is a false statement and what is more it is a very dangerous assertion in that it is contradictory to the ahadith.

“ If Thou punish them, lo! They are Thy slaves, and if Thou forgive them (lo! they are Thy slaves). Lo! Thou, only Thou, art the Mighty, the Wise.” (Maeda, 5:118) Just as ‘Isa (a.s) makes du’a, the Prophet Muhammad (s.a.w)’s du’a and supplications that is more comprehensive and extensive he makes for His Ummah and the acceptance of His du’a should not be denied either. Besides, while interpreting the following ayah;

And some part of the night awake for it, a largess for thee. It may be that thy Lord will raise thee to a praised estate (Maqam Mahmud). (Al-Isra, 17:79) the ulama have interpreted it as referring to shafa’ah. Moreover, in his Tafsir book Ad- Durru’l Manthur, Imam Suyuti mentioned twenty ahadith proving that “Maqam Mahmud (Praiseworthy Station)” is Shafa’ah Uzma (Great Intercession).” (Vol.5)

A great number of the ulama of hadith, especially Bukhari and Muslim, narrated many ahadith on our Prophet (s.a.w)’s making shafa’ah on the Day of Judgment. As the largest available unique collection of ahadith in the Islamic world, the fourteenth volume of Kanz Ummal Kitab is full of ahadith about the subject of shafa’ah. There are in fact 86 ahadith on shafa’ah, all of which would be able to lead those who have iman and conscience to reach to a conclusion on this subject.

Kattani states in his book Nazmu’l mutanasir fi’l ahadithi’l mutawatir that the following hadith, “For every prophet there is an invocation that surely will be responded to by Allah,” (or in another narration, “For every prophet there was an invocation with which he appealed to Allah, and his invocation was accepted (in his lifetime), but I kept my (this special) invocation to intercede for my followers on the Day of Resurrection”) is a mutawatir hadith and that it was narrated as sahih by Abu Huraira, Anas, Jabir, Abdullah b. Amr, Ubada b. Samit, Abu Said Al-Khudri and Abdurrahman b. Abi Uqayl.

In addition to this, the famous hadith regarding people going to the different Prophets on the Day of Judgment and finally coming to our Prophet seeking shafa’ah is narrated from twelve sahaba and is also a mutawatir hadith. The aforementioned book of Kattani can be referred to for more explanation on this subject.

In short, the aforementioned ayat and ahadith make it crystal clear that the people who Allah (s.w.t) accepts and allows to do so, will make intercession.

General and Particular in the Qur’an

Some of the deniers of shafa’ah do so because they misunderstand the shafa’ah ayahs. Before proceeding to consider those misunderstood ayahs, we would like to explain one of the rules for understanding certain expressions, without which one cannot the understand Qur’an correctly.

There are some expressions in the Qur’an which, in spite of seeming to be general, in fact have exceptions and are assigned to specific conditions. A general hukm (provision) is sometimes assigned by another ayah or by ahadith and they are specified, but if there is no proof, then assigning and specification does not take place. People who do not know this could decide on a false hukm and thus go astray. They may also accuse other people who do not accept their ideas of deviance (as is sometimes the case with this subject of shafa’ah.)

For instance, a lot of ayahs in the Qur’an say, “Give zakah (alms).” While seemingly this command is a general command for all muslims, in fact this zakah is a particular order intended only for rich muslims. Likewise, in the surah Al-i Imran:    …(وَلِلَّهِ عَلَى ٱلنَّاسِ حِجُّ ٱلۡبَيۡتِ مَنِ ٱسۡتَطَاعَ إِلَيۡهِ سَبِيلاً۬‌… (آل عِمرَان/٩٧

“…And pilgrimage to the House is a duty unto Allah for mankind, for him who can find a way thither…” (Al-i Imran, 3:97) In this ayah, the term ‘mankind’ is a general term. However, children and insane people (people with impaired mental faculties) are exempted from this command, while they are included in the term ‘mankind’.

“As for the thief, both male and female, cut off their hands. It is the reward of their own deeds, an exemplary punishment from Allah. Allah is Mighty, Wise.” (Al-Maida, 5:38) The hukm in this ayah is general. According to the external and apparent meaning of this ayah, the hand of a person who stole an egg must be cut off, whereas according to ahadith statements, this general statement is assigned to ‘a specific amount’.

In Surat al-Baqara ayah 173, it is said that ٱلۡمَيۡتَةَ (dead animal flesh) is haram. Fish should have also been haram according to the apparent meaning of this ayah, but the ahadith sharif have qualified the ayahs by stating that dead fish flesh is permissible.

While ayah 228 in Surat al-Baqara, which commands divorced women to wait for three menstrual periods is general, Allah (s.w.t) has given this general ayah a specific condition by means of another ayah, ayah 49 of Surat al-Ahzab, which says that brides who were married, but did not consummate the marriage with the zifaf (consummation of marriage), do not have to observe this iddah period.

There are many examples in the books of usul al-fiqh of these ayahs that Allah reveals generally and then specifies by means of another ayah.

Shafa’ah (intercession) is also ‘generally’ negated by some ayahs. However, despite being seemingly general, these ayahs actually veil exceptions and specific conditions. The ayahs that we have mentioned above  make more specific the ayahs that seem to generally negate intercession with the expression “save (that of) him unto whom He permits”,  and Surah TaHa verse 109: “save (that of) him unto whom the Beneficent hath given leave and whose word He accepteth”.

Deniers of shafa’ah will put forward this ayah to us as a proof:

“O you who believe! Spend of that wherewith We have provided you ere a day come when there will be no trafficking, nor friendship, nor intercession. The disbelievers, they are the wrong-doers.” (al-Baqara, 2:254)

In fact, this ayah is qualified by the ayah which follows it, which is al-Baqara, 255:

Who is he that intercedeth with Him save by His leave? (Baqara, 2:255) In other words, “There is no intercession without His permission.”

This is the measure according to which similar ayahs must also be evaluated.