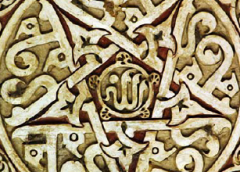 This name is private and particular for Rabb al Alamin[ رب العالمىن], (the Lord of the realms), Who has the  most beautiful names and attributes and Who has created the universe and Who is Wajib al Vujud [ واجب الوجود ] and Who deserves all prayers and praises and the One except for Him there is no god.

The name “Allah” which is called also Lafza-i Jalal [لفظهء جلال] (phrase of majesty), Lafzullah[ لفظ الله], Lafzatullah [ لفظة الله ] is a name particular to Rabbul Alamin [رب العالمىن], (the Lord of the realms) and it is the most inclusive name.

In Sura Maryam (Mary) verse 65, it is stated as follows: “Knowest thou of any who is worthy of the same Name as He?” It has been declared that the name referred in the verse is the name “Allah [ الله]”. It is concluded that this name which is special and private name for Allah cannot be given anybody or anything even in the figurative meaning. Strengthening this point the Pharaoh said: “Ana rabbukumul a’la [اناربكم الاعلى] (I am the greatest lord of yours)”, yet he did not say: “Anallah [ انا الله ] (I am Allah)”. As a matter of fact, there is not anybody in history who was called by this name.

The name “Allah” is the name reiterated most in the Qur’an. It is repeated 2806 times throughout all the Qur’an.

THE NAME “ALLAH” REFERS TO ALL NAMES

Since this name is particular to Allah (SWT) it is the most thorough name.

Regarding that point, Bediuzzaman says as such: “The name “Allah”, which is lafzatul Jalal [لفظة الجلال ](the name of glory), refers purposely to the attributes of perfection and the meanings that all His Beautiful Names [ اسماء الحسنى ] express.”

Again because of that fact, when somebody converts into Islam s/he needs to bear witness. If s/he says “Ash’hadu an la ilaaha illa Rahman[ اشهد ان لااله الاالرحمن] (I bear witness that there is no god but Rahman [the

All-Compassionate])” or “Ash’hadu an la ilaaha illa Rahim [اشهد ان لااله الاالرحىم ](I bear witness that there is no god but Rahim [the All-Merciful])” instead of calling the name “Allah”, that bearing witnessing will not be accepted and s/he will not convert into Islam. That puts forward the lofty features of name “Allah”. (Tafsir al-Kabir, (al-Razi)

Because of this privacy and thoroughness there have been some who say “the name ‘Allah’ is the supreme name”. Another feature of the name ‘Allah’ is as follows: If the letter aliph [ ا] in the phrase “Allah ( الله)” is omitted the remaining is “lillah ( .”(لله )That means “it is particular to Allah”. Therefore, there are verses in the

If the first lam ( ل) letter is omitted the remaining is “lahu ( له )”. That means “It is for Him, it belongs to Him”. Therefore, there are verses beginning with “lahu ( له )” phrase and pointing out to Allah (SWT).

This is just particular to the name “Allah”. This feature does not exist in other names. That fact is available also in terms of meaning. For instance; when you pray to Allah calling His name Rahman [رحمن ](the All-Compassionate), you address His attribute of compassion, yet you overlook His Qahr [ قهر ] (punishing) attribute. When some implores Him calling His Alim [ علىم ] (All-Knowing) name, he turns towards His Ilm [

علم] (Knowledge). However, in that case he does not mention His Qudrat [ قدرت](Power) and that attribute, but when you call Him by the name “Allah” you address all His attributes. (Tafsir al-Kabir (al-Razi)

Imam Bediuzzaman expresses declares that human needs the phrase of “Allah” at any moment, as follows:

“Bodily needs vary according to variation of times. Either they decrease or increase. For instance; air is always needed; water only when one is thirsty or hot. Food is needed daily; light is needed once in a week mostly and etc. In the same way, one’s spiritual needs vary. ‘Allah’ phrase is always needed; others, such as Bismillah [ بسم الله ] (in the name of Allah) are needed regularly; and still others; such as La ilaaha illallaah [ لااله الاالله ] (There is no deity but Allah) are needed every hour.

We have said that when we omit the letters one by one in the phrase “Allah” the last letters is “Hu ( ه)” meaning ‘He’. The letter ‘he ( ه)’ is articulated through chest and lungs. For this reason, in each breath we utter the letter ‘he ( ه)’. So, the phrase ‘Allah’ is uttered through ‘He ( ه)” in every breath. The sounds that the wind and leaves make is the dhikr of ‘he ( ه)’ and all creatures that make pulmonary respiration also utter the phrase ‘Allah’.

Therefore, as Bediuzzaman said the human being who needs the air at any moment utters ‘He’, that is Allah, in every breath and by that way s/he satisfies his or her spiritual needs. So, when uttering the name of Allah stops, the human who needs Him in every breath; dies since s/he can’t say His name.

O our Lord! Help us in mentioning Your name and submitting our thanks to You and worshipping You for the sake of Your blessed name “Allah”. Grant us to deliver our souls with bearing witness by phrases of tawhid and sha’hadah in our last breath! Amin and thousands of amins!