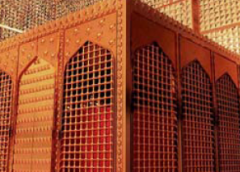 Ghaws Al Azam Abdul Qadir Gilani who was a recipient of the hadith of our Prophet (PBUH) “the scholars of my ummah are like the prophets of Banu Israel” was born in village of Nif of Gilan state of Azerbaijan in 1078 (H. 471).

His father Abu Saleh passed away when Abdul Qadir Gilani was little. Then, he was brought up by his grandfather Assawmai. After he studied basic Islamic disciplines he went to Baghdad to continue his education.

Abdul Qadir Gilani went to Baghdad in his eighteen. He studied Hadith, Islamic Law, and Sufism disciplines through the scholars living there. After he completed his education he began to give lectures and sermons. The frequenters of his sermons were too much that they did not fit into his madrasa and stayed in the street. So, he gave his lectures outdoor.

That blessed person who had a sacrosanct genius had a profoundly deep knowledge. He used to teach thirteen different disciplines. He would teach Tafseer, Hadith and Islamic Law after morning and afternoon prayers; the recitation of the Qur’an after noon prayers. He would give lectures on methodology and Arabic grammar in mornings and evenings. The most renowned of his ten books are Al-Ghunya li-talibi tariq al-haqq wa al-din (Sufficient Provision for Seekers of the Path

of Truth and Religion) and Futuh al-Ghaib (Revelations of the Unseen).

Abdul Qadir Gilani who was considered by Bediuzzaman as one of the masters of Risale-i Nur “had such a high level and was the recipient of such extra ordinary situations, some of the infidels said: ‘We do not accept Islam; yet we are not able to

refuse greatness of Abdul Qadir Gilani.’ And even the extreme segments of the Wahhabists are not able to refuse the Grand Sheik. It has been unanimously declared by sufis that the Awliyas have not been able to reach his glorious level.” (Sikke-i Tasdik-i Gaybî, p. 151)

The progress of Gilani in spirituality had reached to the level of “Sultan al awliya (the lord of the saints)” and he surprised the sultans of his time with his effort for Islam and that situation continued during all his life. Even, the other awliyas at that time had reported that his degree would be higher in the future in terms of extraordinary performance (karamah). A blessed person named Sheik Hammad heralded when Gilani was young as follows; “Have you seen that young man? He will be higher than all of the saints and all saints will obey him.”

Sheik Tajj Al Arifin Abul Wafa stood up when Gilani came to him and he ordered to people with him to stand up saying; “Stand up! A man who is awliya is coming”. When his disciples were amazed at his reverence for Gilani who was younger at that time he responded “Still there is time. When time is up literate-illiterate everybody will come to that man and get benefit of his spirituality” and addressed to Abdul Qadir Gilani as “Today right to speech is ours but tomorrow you are going to speak up. Then, remember this old man (meaning himself)”.

Since Abdul Qadir Gilani was the recipient of Hayy, one of the beautiful names of Allah, he was granted many extraordinary situations (karamahs) as bounty of Allah. For example; “Once upon a time there was a son of an old, delicate woman under the spiritual supervision of Ghaws Azam Sheik Gilani. She went to her son’s lodge to visit him and witnessed that he had lost weight and become bony and was eating a bad, dark piece of bread. Her compassion for his son was ignited and she pitied him. Then she went to the Sheik to complain about the situation. She realized that the Sheik was eating a fried chicken. She said: “O Sheik! My son is starving to death and you are eating chicken!” The Sheik ordered to chicken to stand up by will of Allah. Then the bones of the cooked chicken gathered together and the chicken jumped out of the plate as a living chicken. Upon this Ghaws Al Azam said: “When your son gets that level then he can eat the chicken.” (Lem’alar, s 148)

Ghaws Al Gilani who is one of those awliyas whose spiritual power is effective after death (Hayat bin Qais, Ma’ruf Karhi, Uqail bin Munjibi) has been famous as “Ghaws Al Azam” meaning the greatest helper, aider.

One of those whom Ghaws Al Azam helped spiritually most was Bediuzzaman. Bediuzzaman tells about the assistance that Abdul Qadir Gilani, whom he considered his master, provided him as follows: “When I was eight or nine all people in the neighbourhood were members of Naqshi tariqah. They would demand assistance from Ghaws Hizani, who was famous there. However; I was calling for assistance as “help me, O Ghaws Gilani!” contrary to my relatives and covillagers. In my childhood when I lost some stuff like hickory or whatever, I would say “O sheik! Make me find my hickory then I will recite a sura fatiha for you.” It is interesting and I swear that sheik Gilani assisted to me with his prayer and favour one thousand times. So, whenever I read fatiha and prayers I would send to soul of Gilani after our Prophet (PBUH).” (Sikke-i Tasdik-i gaybî, s. 145)

Abul Qadir Gilani who is one of four great polars [of Sufism] (Sayyid Ahmad Badawi, Sayyid Ibrahim Dasuqi, Sayyid Ahmad Rufa’i) had peaked in all spiritual levels such as Qutbiyyat, Fardiyyat and Ghawsiyyat. He had learned his lesson directly from Qur’an without referring anybody. That divine bounty which has been granted to very few people has been given to Risale-i Nur, which is a miraculous commentary of Qur’an, and its author.

Ghaws Gilani had a solemn appearance. He would speak little and keep silence long. When he spoke he would speak clearly and plainly. He would not get angry for his personal issues but he was uncompromising in religious matters. He would not spend a night without a guest. He would help to weak and poor. He would not decline any material demand from anybody and if he had two clothes he would give one to anybody who demanded it. The ones who were near to him thought that there had never been anybody who was more benevolent and generous than him. He would ask after his loved ones when they were far away and he would forgive those who mistreated him. Many people who committed evil deeds such as thieves, murderers and bandits repented for their crimes through him. He would buy and freed the slaves. He would keep his promises and wouldn’t suspect anybody without evidence. When somebody saw Gilani he was influenced by his appearance and knew that he was a blessed person and his heart softened if it was hard.

Abdul Qadir Gilani got a seriousillness at the end of his long and fruitful life and passed away in 1165 (h. 561) in Baghdad uttering the words “Allahumma rafiq al a’la” and “I am coming you” and he attained his eternal loved One (SWT). May Allah grant us his intercession!

3 thoughts on “The Sultan of the Awliyas”