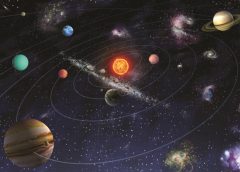 We were in a program in Sav madrasa in Isparta. One evening an elder brother, Hafiz Bekir, called me and said, “I have an atheist nephew. He is a teacher, and he is with me now. He is an outspoken man and says, ‘If you prove me the existence of Allah, I will believe.’” This elder brother wanted me to meet his nephew; and I said OK. We met in our senior brother Süleyman Semiz’s house at 9 pm. With a deep compassion and affection towards this man, we started our conversation.

He said he believed that everything existed by itself and that there was no creator. I told him I was glad that he was brave and outspoken, and explained some points as follows:

There are numberless evidence and proof for the existence of Allah. One of them is the law of action and reaction in physics. When we look at this law, it proves that nothing exists by itself, and every work, or reaction, points at the existence of an action.

Similarly, every being, from an atom to planets and realms, with its existence, points at and proves the existence of Allah (swt) Who has endless power, wisdom, knowledge, and will.

This time he claimed that everything came from nature and the nature itself was the creator. After I explained [the impossibility of] this, he came up with a different idea. And I told him, “My friend, I know you are brave and outspoken. We disprove one claim, but then you come up with another one, like a chameleon changing its colour. If you say your real idea, we can discuss accordingly.

He said, upon this, that he actually believed in the evolution. And I said the following:

My friend, the evolution is an issue discussed and spoken upon very much. And it was said that there were many kinds of it. In brief they said all the living beings derived from one another and from one ancestor at the beginning. And it was supposed that this ancestor was comprised of cells and these cells were formed from a single cell. However, Darwin himself first of all, and others who got the idea of evolution could not answer how the first living cell existed. Moreover, Russian chemist Oparin and English geneticist Haldane, as a result of their experiments, could not explain how the first cell and living building blocks came into existence, but just said it was coincidence.

Even a simple and useful needle cannot be attributed to coincidence; so how can we attribute a perfect cell, which is more splendid than a palace, and its building blocks to coincidence? Doesn’t even the most stupid man understand that this claim contradicts reason and logic?

My dear brother, let’s put the materials used for building a cottage on a ship, put it to an ocean, and let it sail and labour on the ocean for billions of years. Do you think there is even a tiny possibility that the materials on board coincidentally come together and make a cottage as a result of this billions-of-years’ sailing and labour.

According to the scientists, a single cell is such a wonderful palace that if people toiled for building a palace as perfect as this cell, it would occupy a place as large as Konya Plain. There is no possibility that matters like hydrogen, oxygen, carbon, and nitrogen- the building blocks of this cell- coincidentally come together and make the cell.

Yet again we should look at the law of action and reaction. Creating hydrogen, oxygen, carbon and nitrogen, and making the cells with these according to the project of destiny, and giving life to the cells with the Divine Name Muhyi, the Giver of Life, gathering up these cells and creating the human with the cells with His power, Allah Subhanahu wa Ta’ala gives qualities to the human from the manifestations of all of His Divine Names like ‘Alim, the All-Knowing, Basir, the All-Hearing, and Mutakallim, the Speaker. Therefore, the One Who creates the human body, which is a great work of art, with these materials, and the Owner of these materials is no one but Allah swt.

After these explanations and many others, this young man said, “Because I could not prove the non-existence of a creator, and you have proved the existence of the Creator, Allah swt, I accept His existence,” and he has been saved from atheism. And we congratulated him for believing in the existence and oneness of Allah swt, which is the basis of all happiness.

This is a summary of a two-and-half hour discussion with him.

Unfortunately, some people, who are unable to understand the existence of Allah, go astray by reasoning in a wrong way and saying that “it would be wrong to accept an action [i.e. Allah swt] which creates everything, and which we cannot see and know.” However, knowing the existence of a being and understanding what it is are different things. We are not able to know everything because of our weakness. We know the existence of the life, spirit and many other things although we do not know what exactly they are. But we do not necessarily deny them because of our lack of understanding their essence. Similarly, by looking at the law of action and reaction, we can understand the existence of Allah (swt) as if we see Him. But if we deny Him because of our lack of understanding what He is like, this will be against reason and logic. According to the saying “Tree is known by its fruits,” this universe and everything in it introduce us their creator, Allah swt. So we should know Him in this way.

The idea that “everything existed by itself” or “causes made the things” or “nature did it” is thousandfold unreasonable and impossible. We ask ourselves how some wise people can go in this wrong way. When we look carefully, those who deny the existence of Allah give up Islam and begin to live in another way, are going in another way not because they prefer it according to the reason and logic. Perhaps for they find themselves on that way, they cannot accept that that way is wrong way. When they realize that the way is wrong, they have a guilty conscience. In order to ease their conscience, they either claim that the right way is wrong, or accept their wrong way as right with some tricky arguments. With this trick of Satan they convince themselves and continue on their way.

And some people, on the other hand, see that it is reasonable to accept the existence of Allah; but, unfortunately, when they think about the fact that someone who accepts the existence of Allah has to obey His commands and prohibitions, they choose denying the right way. Because they find it difficult to do the duty of servanthood and to give up the sins they have become addicted to. Like the man who escapes the bites of a fly but goes into the mouth of a dragon, they end up preferring the eternal torments of hell in order to get rid of the trouble of worship in this world.

However, Islam that the Muslims live is quite different: Those who embrace Islam become Muslim by accepting Islam as the true religion with the reason and logic. Renowned people in science and art like Muhammad Ali Clay, Yusuf Islam, Roger Garaudy, and many others are among them.

And there are those who are Muslims by birth and follow Islam imitating their families and environment. Later they understand the truthfulness of Islam and get a critically verified faith with reason and logic. As a matter of fact, according to our religion, for someone who obey others and has imitative faith it is compulsory to make his faith critically verified with evidence and proof.

May Allah always bestow us to walk on the right course everywhere, and may He not let us to be alone with our lower-self even for a moment. Amin.