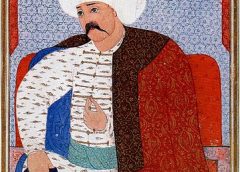 One day, Sultan Selim the Grim said to his Grand Vizier Piri Muhammad Pasha: “Wherever we have gone so far, we have returned with victory by the grace of Allah. We have increased our treasure and we are rich and powerful. Do you think this powerful state could ever collapse?” Pasha responded to this question as follows:

“My great and wealthy Sultan, the state will not collapse given this present situation. But if a different set of circumstances comes about in this state, then it could certainly collapse. For example, if the post of grand vizier (prime minister) and the other important positions were to be given to ignorant and incompetent men, then the door for bribery could open, and then every kind of evil would enter through this door because of money. If this were to happen, the state would collapse.” Upon this Sultan Selim said: “May Allah protect us!”