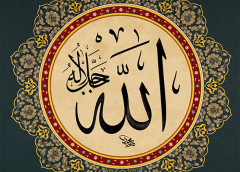 1- Importance of proving the existence of Allah

Throughout the history of humanity, even though people worshiped the Sun, stars, stones and idols, it has been hardly seen that they denied the existence of Allah (swt). All the prophets from Adam (puh) to Muhammad (pbuh) fought with pagans who believed in Allah but attributed partners to Allah (by worshipping idols). In the same way, since the earliest times of Islam it has not been seen that atheist people, except some philosophers, lived in Islamic societies. Islamic scholars did not fight with the atheists; they fought with ahl ul bi’dah (the people of [bad] innovation) such as Mu’tazila and Shi’a. Atheism was not seen in Christian Europe until the New Age, either.

The Church’s illogical beliefs that conflicted with scientific studies and its extreme pressure on public and scientists caused philosophers to hate the Church, and this made scientific studies in line with atheistic ideology. Atheism, which appeared for the first time among the philosophers and affected public later on, turned the Western societies into atheist societies especially in 19th century. Atheism was spread like plague all over the World once the Western culture influenced all the other nations.

Before proving the existence of Allah, we have to dwell on the evidences which are used for proving.

Induction (burhan-ı inni) means deducing causes from results.  Reaching the maker from his work, an artist from his art and the fire from its smoke are a few examples. When we see smoke rising from behind a mountain, we say “A fire is burning over there,” even if we do not see the fire itself; because smoke is a result of the fire.

Deduction (burhan-ı limmi) means deducing results from reasons. Reaching the work from its maker, the art from its artist who produced it, and the smoke from fire are some examples. When we see a fire burning in the darkness of the night, we say “There is a fire burning, so- even if we do not see it- there is a smoke as well.

Exemplification is a method to explain and prove something by giving examples, to compare something with its similar. Examples help us to understand the issues which are hard to comprehend, and they make it easier to prove the truths.

3- Ways to prove the existence of Allah

There are various evidences that have been used to prove the existence of Allah (swt). The most important of them are “creation evidence” (hudus) and “regularity and purpose evidence.” Let’s discuss these in brief:

Hudus evidence is briefly as follows:

Nowadays we know that the creation of the universe known as The Big Bang has been proved right. It demonstrates the accuracy of the creation evidence.  As follows:

Researches in astronomy in 1920s discovered that the planets move away from each other. Based on this, scientists proved that universe is expanding, and so once there was no universe (zero volume) and it came into existence after a big explosion.  Atheists had rejected this point of view at first, but many researches and experiments proved that the Big Bang is real.

Creation of the universe from nothing clearly demonstrates the existence of Allah (swt); because it is impossible that the universe, which did not exist before, can create itself. So the universe was created by an external power; someone who has knowledge, will and power; that is Allah (swt).

Therefore, the Big Bang scientifically shows the existence of Allah.

Order and purpose evidence is briefly as follows:

Let’s look at the following word as an example of order and purpose evidence:

“A book cannot be without a writer, a house without a builder, nor a town without a mayor.” Writing of the book, building the house and governing the town require people who have knowledge, will and power.

The book of the universe requires its writer; and the palace of the world requires its builder who has knowledge, will and power. Otherwise, such a wonderful world and universe cannot exist. Also, if there was not an administrator, the magnificent order of the army of the living beings would have become a chaos.

We have said earlier ‘A book cannot be without a writer’.  Let’s prove the truth of this claim with an experiment of scientists. As follows:

Some atheists claimed that the world occurred by chance and they said, “A monkey hitting keys at random on a typewriter keyboard for an infinite amount of time will almost surely type a given text, such as the complete works of William Shakespeare.” “A monkey pressing keyboard keys at random can write a masterpiece like the works of Shakespeare by chance.”  Scientists put a computer with six monkeys to a cage in Arts Council England to test this hypothesis whether it is true or not. The monkeys hit the keyboard keys throughout one month. They printed what monkeys wrote one month later. Written papers were checked. There was not even one meaningful word. The letter “I” is a meaningful word as pronoun (when there is a space before and after it).  50 pages that monkeys wrote did not include even a meaningful ‘I’.

If there is not even one meaningful word in 50 pages document by chance, how can plants and animals which are well-organized, orderly and meaningful like a book occur by chance?

Scientists told that plants’ and animals’ cells and even proteins in a cell cannot occur by chance. Scientifically, it has been proved that possibility of that one single protein occurs by chance is 1×10160.  These possibilities are related to one single protein among numerous proteins in just one cell. It is much more different for organs which contain billions of cells.

All of these show us that the beings did not come into existence by chance, but were created by Allah (swt) Who has knowledge, will and power.

Examples for “order and purpose evidence”

Now, we will mention some examples that show the existence of Allah by looking at the ‘order and purpose evidence.’

Hundreds of medicines in a pharmacy, which are made in excellent and precise measurements, show, without a doubt, a skilled chemist and a pharmacist who knows the illnesses and their treatments.

The world is just like a huge pharmacy. In this pharmacy, hundreds of thousands of species of plants and animals are kind of medicine jars; because they are also made in various precisely measured materials.

This world is self evidently more excellent and bigger than a pharmacy; so it shows and introduces its builder and establisher, Allah (swt).

A factory which produces fabric from a simple material shows the manufacturer who established it, the headworkers and the masters who run the factory.

The world we live in is built as a factory which makes production in thousands. In fact, this factory of world is a factory which produces factories. In this world, atoms from air, water, and earth are combined and innumerable plants, animals and humans are produced (created, that is).

Just as a textile factory produces fabrics, the skins of human, the feathers and wings of bird, the fur of other animals are produced in this factory of world.

These produced beings work like a factory, too. For instance, plants produce leaves, flowers and fruits; animals produce milk and meat. Human body also produces; it turns the food into cells, blood, bones and organs. There are many other examples.

Just as every factory show its manufacturer who established it, this factory of world certainly show and introduce the master that has built it, the person who has created plants, animals and humans.

In the barracks of the earth, 400 thousands armies are formed by plants and animals. These 400 thousand armies have different clothes and foods, different training and weapons; their recruiting (i.e. birth) and discharge (i.e. death) are different. Not even a simple need of a single soldier in these armies is forgotten; every need is met. All of the armies are ruled in an extraordinary way without a mistake. Some of these armies are sometimes discharged- in winter for example- and new armies are recruited instead (in spring).

Of course a regular army shows a commander who rules its soldiers. The formation of the armies of plants and animals in the barracks of the earth, their needs’ being met, their being ruled extraordinarily, show the Sultan, the Ruler, the Lord of this universe, Allah (swt). They also demonstrate His grandeur and power, His greatness and lordship. Who does all these things in the universe with His knowledge, will, and power is Allah (swt).

A supermarket or a warehouse, which has thousands of food items, of course shows its owner the one who brings the food items, stores and prepares them.

The world we live in contains billions of living beings and travels through the space. (If a man were to try to walk the distance the world covers around the Sun in one year, it would take him twenty four thousand years to reach the end of that distance.) Every animal living in the world has different needs. An ant or an elephant, a fly or an eagle, a tiny fish or a whale, a lion or a gazelle eats not the same things. Our ship of the world touches at the ports of (four) seasons; loads containers full of supplies; stores thousands of various foods in its hold; presents its food to the living beings that run out of supply in winter.

From this aspect, the world is in the position of a divine food storeroom or a supermarket which is full of various kinds of devices, goods, and canned foods; a safe divine space ship travelling through the space.

Just as a warehouse or a supermarket selling food items shows its owner and founder who has built it and stored supplies in it, so too the world, which is like a huge warehouse containing the needs of all living beings and never runs out of supply, of course shows Allah (swt) Who has established and manages it accordingly.

Imagine that there are millions of lamps in a city. And they are moving around everywhere in the city. And their power supply is never cut. Naturally, these lamps and the factory introduce the one who manages the electricity, makes the portable lamps, establishes the factory and brings the necessary materials; and cause him to be loved.

Similarly, in this city of the universe, the stars (lamps) at the ceiling of the palace of the world do not collide and they continue their order although some of which, according to astronomy, are one thousand times bigger than the Earth and move seventy times faster than a cannonball. And although they burn for hundreds of years, they do not die or run out of fuel.

According to astronomy, the Sun, which is our lamp and heating stove, is one million times bigger than our world. It moves at approximately 250 km/s through the universe. (Jets speed up to 2500 km/h; that is, they cover the distance that the Sun covers in ten seconds in one hour. Buses can travel the same distance hardly in one day.) And it is said that it is older than one million years. In order that it continue to live (give light and heat), gas oil as much as the seas and coal as much as the mountains of the Earth or firewood as much as one thousand worlds is necessary.

Therefore, however big are the lamps of the universe, they show us the One Who gives them light, the One Who manages, Allah (swt).

One thought on “Evidences for the existence of Allah”