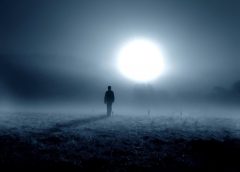 At the end of times -akhir zaman- we live in a very dangerous sea and try to save our life from its fatal waves. In this situation, we firstly need a life ring. However, this is not enough if we are alone and do not know where we will swim. After that we have to swim towards safety island with the others in the sea and join the people of salvation (ahl an-najat).

In this hypothetical short story there are three main metaphors (sea, salvation and island). The sea and its fatal waves are like sins, especially grave sins. In this age, sins that threaten our religious life are, unfortunately, everywhere. We might commit hundreds of sins in a single day. When we realize that we fall into so many sins, we may easily give way to despair. We think we will not be able to do it; we will not enter Paradise directly because of our sins. The salvation is to try to be a real Muslim and secure our afterlife. And the island which we are trying to reach is Paradise.

To be alone = To be perished!

We should not be on our own. We have to definitely participate in an authentic Islamic community. If you are alone in the sin sea, only one of the deathful dangerous waves can cause you to be drowned instantly. For the sake of your eternal life you have to avoid from nowadays’ sins and find an easy way to do so. From this point view you have to find a group of people that must be adherents of an authentic Islamic community; in other words, followers of Sunnah and Jama’ah.

Another point to be considered is that our evil-commanding soul can cause us to commit sins without worrying if we are alone. If we have a good friend, our eyes cannot look women, for instance, or cannot commit any other sins fearlessly. Because of this, being alone is an open invitation to the sins. The following verse refers to this topic:

“And those who feared (to commit sins and) their Lord will be led to the Paradise in groups: until behold, they arrive there; its gates will be opened; and its keepers will say: “Peace be upon you! Well have ye done! Enter ye here, to dwell therein.”1

The name of this surah “The Companies” also refers to be participant in a group. That is because some people who stay away from sins, like alcohol, gambling, adultery, theft and so on can manage this thanks to the groups they join.

Our Prophet (saw) guided us in the following hadith:

“He who treads the path in search of knowledge, Allah would make that path easy, leading to Paradise for him and those persons who assemble in the house among the houses of Allah (mosques) and recite the Book of Allah and they learn and teach the Qur’an (among themselves) there would descend upon them tranquility and mercy would cover them and the angels would surround them and Allah mentions them in the presence of those near Him.”2

This hadith also shows us the benefits of participating in a group.

Now it is time to ask that “How can we find a rightful group and which criteria should be considered?”  It is always possible that someone from among Ummah may fall into grave sins or unbelief. The following verse was revealed about this:

“Those are limits set by Allah. Those who obey Allah and His Messenger (Prophet Muhammed) will be admitted to Paradises with rivers flowing beneath, to abide therein (for ever) and that will be the supreme achievement.”3

This verse definitely shows us that those who want to go to Paradise must obey the rules of Allah (swt) and also must obey principles of our beloved Prophet Muhammed (pbuh).

Nevertheless, there are a lot of Muslim groups claiming that only they are rightful group. In order to remove this confusion from minds, we have to listen to our beloved Prophet Muhammed (saw) indicating the corrective measure as “My nation will not unite on misguidance, so if you see them differing, follow the great majority.”4 This hadith clearly cites evidence that we have to be tied to “ahl-as’Sunnah wal Jama’ah” – followers of Sunnah and Jama’ah.

Another good reason to join in a group is referred by our Prophet (saw) in the following hadith:

“A person would be along with one whom he loves.”5

Imam Bediuzzaman Said Nursi makes a comment about this hadith: “A friend will be together with his friend in the Paradise.”6

Moreover, Imam Said Nursi says the following to his students:

“My brothers! All of us continuously are praying each other for our last and good end and for our eternal happiness hereafter. Suppose that all of our prayers are rejected, but only one of them is accepted, it would be enough for us to go to grave with faith. The reason of this is because every prayer includes all of us.”7

The last thing in this topic is about faith- iman. Imam Nursi says, “Belief necessitates tawhid [affirmation of Divine Unity], tawhid necessitates submission [to Allah], submission necessitates reliance [on Allah], and reliance necessarily leads to happiness in this world and the next.”8

We can infer from this point of view that to be a believer requires being in a group of rightful people.