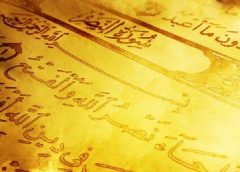 This year is the 1400th anniversary of revelation of the Qur’an.

This year is the year of the Qur’an.

The Organization of Islamic Conference (OIC) took the decision that to mark the 1400th anniversary of the Qur’an. 2010 and 2011 will be the years of commemoration and paying tribute to the Qur’an in all Muslim countries.

In the same date, the council of the Union of Non-governmental Organizations of Islamic World (UNIW), gathered in Kuala Lumpur on 22-25 of May, made a decision to organize activities promoting and understanding the Qur’an in the Islamic world.

NGOs, Turkish religious affairs offices, universities, municipalities and magazines are focusing their works on it with a sweet rush and arrival of ‘holy three months’.

Everybody enjoys the excitement of serving to the Qur’an in any possible way.

We have devoted the pages of our magazine to the Qur’an to mark the 1400th anniversary of the revelation of it.

Here you will find a special issue for the Qur’an.

We are going to update events in the upcoming issues.

There is no other true healing and solution other than strengthening our ties with the Qur’an!

With its truths… With its language and letters…

walks of our lives.

Thus, we would like to make the best use of the year remembering the teachings of the Qur’an and practicing.

Quran being a magnificent ocean, we tried to taste some droplets in this issue.

Going around the articles, you will find the truths of the Qur’an are as fresh as daisy, and new as if it has just been revealed this year, in the 1400th Anniversary of the revelation of the Qur’an.

We hope it has been a worthwhile work. I wish this year brings what we, as Muslims, strive for… spirituality, prosperity, well-being, unity and success. I invite you to a new journey through the Qur’anic scented pages of The Pen Magazine.