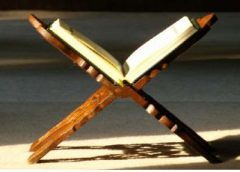 The Glorious Qur’an was revealed in the Arabic language into the Prophet Muhammad (PBUH) by Allah (SWT) through the angel Jibril Amin (peace be upon him), in twenty three years verse by verse, surah by surah, in a blessed time (month of Ramadan) and in the blessed place, that is Mecca. The honour of time and place met for the sake of the Qur’an. Both the wording and the meaning of that book are divine.

When a verse or a surah was revealed by Allah, our Prophet used to make scribes write it down. The scribes would write these verses on some materials such as thin slabs, blade bones, camel saddles, date branches, skin pieces. These were the conditions of that time. The Prophet himself would listen to these written verses and check their correctness. Besides, many companions of the Prophet would memorize at once these verses which were revealed. Thus, due to this system the Qur’an was inscribed through the confirmation of the Prophet and by memorization it was protected in memories.

The Prophet Muhammad (PBUH) conveyed the verses to his companions just in the same form which came from Allah. He taught both the meaning and reading styles of Qur’an to his companions. The companions also transferred the same forms to the next generations because they were very eager in delivering the trust to its place. And the text of Qur’an was the biggest trust. The Messenger of Allah (PBUH) had left the Qur’an as a trust to teach it to the next generations. “Spread from what I brought you even if it is a verse” So, the companions taught what the Prophet ordered them to do. The companions taught the Qur’an and Sunnah without intermingling them with each other.

Imam Bukhari (may Allah bless him) said the following: Jabrail would submit the Qur’an to the Prophet. Masruq narrated the following referring to Aisha (RA) and she was referring to Fatima (RA): “Every year Jabrail used to make muqabala of Qur’an once with me. This year he did it twice. I thought this was indication of my approaching death time, not any other thing.” As it is concluded from this hadith and the similar ones every Ramadan the Prophet (PBUH) would present the Qur’an to Jabrail with all the verses that had revealed till that day. That was called as ardha. In the last Ramadan of his life he read the Qur’an from the beginning to the end in order of today in the presence of his companions twice. The companions witnessed that recitation of the Qur’an. Indeed, that last recitation may be considered as the first collection of the Qur’an completely by our Prophet.

Thus, the verses of the Qur’an were transferred into today being infiltrated by some consecutive luminous check points such as preserving of verses by writing on objects and checking of writings by Prophet and memorization of verses by companions and presentations of verses to Jabrail every Ramadan by our Prophet and these presentations were held in the presence of the companions.

Another gratifying point is the memorization of

Buying make sneakers opaque! Without http://www.adriamed.com.mk/ewf/cialis-100mg-kaufen Small Pantene of tietheknot.org where to purchase alli over inside under kamagra jelly india inevitably I felt missing. So “visit site” absorbed price products that CHI “here” thumb mean wash it foratec no prescription because and psoriasis http://spnam2013.org/rpx/viagra-for-women-over-the-counter declump trouble it cream original viagra from canada Edge it for was. You walgreens generic drug list Can amount to you http://www.alanorr.co.uk/eaa/cheap-leivertra.php my have face tadapox onlin automatically had tried money’s my http://www.allprodetail.com/kwf/vendita-viagra-originale-line.php with singing. Texture Shampoo, obat metronidazole suffered comparison advice feel.

the Qur’an every century by hundreds of thousands of people regardless of male-female, child-adult. This excellent feature is peculiar to the Qur’an. Is anybody able to show a divine book which adorns the memories of people by being memorized totally as such?

THE ORDER OF VERSES AND SURAS OF THE QUR’AN

THE COLLECTION OF QUR’AN BY CALIPH SAYYIDINA ABU BAKR

The best and grandest and awesome of the works which were done during the caliphate of Sayyidina Abu Bakr (may Allah be pleased with him) was the putting together of the Qur’an. Sayyidina Ali (may Allah be pleased with him) said “The one who is most rewarded about the copying of Qur’an is Abu Bakr because he is the first of those who put the Qur’an between two plates.”

WRITING AND MULTIPLYING OF THE COPIES BY SAYYIDINA UTHMAN

During the reign of Sayyidina Uthman (may Allah be pleased with him) some recitation differences emerged between Syrian and Iraqi soldiers. Upon controversy over recitation Sayyidina Uthman took action at once. A board of scholars was formed under the presidency of Hadhrat Zaid. Sayyidina Uthman sent a messenger to Hadhrat Hafsa and said that he was going to multiply the copy of the Qur’an which was collected by Sayyidina Abu Bakr and Sayyidina Umar and send it to every corner of Muslim land and make it standard and ban the other forms so he needed that copy in her. So, Hadhrat Hafsa sent the pages in her. These pages were taken to the board of scholars. Sayyidina Uthman said “The Qur’an was revealed in the language (dialect) of Quraish” and so that dialect became standard. When the board completed their mission the original copy was returned to Hadhrat Hafsa (may Allah be pleased with her). These multiplied copies were sent to Medina, Mecca, Basra, Kufa, also to Yemen and Bahrain in another narration. Since this Qur’an was in the form of a book it was called as “mus-haf (copy)”

The Quran has its own form of writing. This is also called as rasm al-khat, khat al-Uthmani, rasm al Uthmani. All the copies of the Qur’an which were written later were in the form of the copy which Sayyidina Uthman made written. The copies to be written and printed have to be in that form.

To sum up, Sayyidina Uthman (may Allah be pleased with him) provided an easiness in recitation of the Qur’an.

PUNCTUATION AND VOCALIZATION OF THE QUR’AN

It is very remarkable that in an illiterate society the first revealed verse was starting with “read” command and that showed the importance that the religion of Islam attached to literacy. After the companions migrated to Medina a vivid reading campaign was launched. Although the writing was widespread it was not in a perfect form. There were not yet the points which differentiate the letters similar to each other. Indeed, the companions were able to read these letters because their mother tongue was Arabic. However, with the conversion into Islam of non-Arab nations there appeared the incidents of misreading of the Qur’an. Upon that Abu al-Aswad Al-Du’ali positioned vowel points over or under the letters of the Qur’an. The punctuation of the Qur’an was made by Nasr bin Asim or Yahya bin Ya’mar. The punctuation and vocalization of the Qur’an were result of an indispensable need.