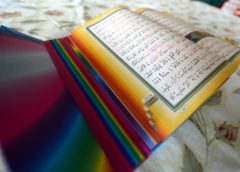 The Holy Qur’an is the word of the Lord of the worlds. Qur’an is the ocean of miracles and the interpreter of this secret universe. It is the sacred map of the hereafter. It is the living miracle of Prophet Mohammad (PBUH) for fourteen centuries. It rescues the universe from disorderliness, idleness, inexpressiveness and nothingness. Because it teaches the complete rules for  Muslims to live a good, chaste, abundant and rewarding life in obedience to the commandments of Allah (swt) in the world  and to gain salvation in the hereafter. The Noble Qur’an is the guide of life for every Muslim and it is the means to acquire the paradise and most importantly the ‘’ridwan’’ which means the eternal satisfaction of Allah (swt).

Since the Glorious Qur’an was revealed, each generation of Muslims has found new sources of strength, courage, inspiration and different miracles in it. Because of this, as the time passed by, more miracles of Qur’an appeared. As Imam Bediuzzaman (May Allah be pleased with him) says “As the time gets older Qur’an becomes youthful and truths of it are come to light.”  It is also a “compass” for Muslims in the turbulent voyage of life, as it has explained itself in the following verse:

“Indeed, this Qur’an guides to that which is most suitable and gives good tidings to the believers who do righteous deeds that they will have a great reward.” (Isra, 17:9)

The Noble Qur’an has miscellaneous miracles which are increasing as the time passes by. The most important and apparent miracle of Qur’an is the life-style which is brought by Qur’an. Besides this, it has scriptural and acoustic aspects which address to the group of people who hasn’t got so much knowledge to understand the whole miracles of the Holy Qur’an. Imam Bediuzzaman Said Nursi (May Allah be pleased with him) names this group of people “eyed layer” and “auriculated layer”. These people are able to recognize the brilliance of the Noble Qur’an with their eyes and ears.

From among all these miraculous aspects of the Holy Qur’an if we examine the acoustic aspect of it, we will see very different magnificent features. Because whoever listens to the Glorious Qur’an would say “This Qur’an that I am listening is not similar to other books. It should be either lower than the other books or it should be highest and greatest amongst them,” even if he does not understand the meaning of the verses. It is impossible to say that the Qur’an is lower than the other books. Nobody can say it is lower, and up to now nobody could claim that idea. In that case Qur’an is the greatest book, and no other book can reach the level of the Noble Qur’an even if we examine only from the point of view of acoustic aspect. This miracle of the Qur’an itself exclaims that “I am the word of the Eternal Speaker” and shows the human being that it is the ocean of miracles from every aspect.

Another miraculous acoustic aspect of the Holy Qur’an is its blessed sound while it is being recited or read. When we listen to the Glorious Qur’an, spiritual and sacred emotions rise in the hearts. Its blessed sound softens the stubborn hearts of the unbelievers. There are so many converts who accepted the religion of Islam only with listening to the Noble Qur’an. At the same time the Qur’an is a means for strengthening the faith and softening the hearts of the believers. As the following verse expresses:

“The believers are only those who, when Allah is mentioned, their hearts become fearful, and when His verses are recited to them, it increases them in faith; and upon their Lord they rely.” (Anfal, 8:2)

In the time of Prophet Mohammad (peace be upon him), the unbelievers listened to the recitations of the Holy Qur’an even if they fought Islam and the Qur’anic messages of the Prophet (PBUH). When Prophet Mohammad (PBUH) was praying at midnights in his home, the unbelievers were secretly coming to the vicinity of the Prophet’s house in order to listen to the Noble Qur’an. They listened to Qur’an from midnight to fajr time. Because they heard nothing like the Qur’an up to that time. Once, one of the unbelievers came to the vicinity of the Prophet Mohammad’s house to listen to the Qur’an. Another unbeliever was also listening to the Qur’an at the same time. When they saw each other they were surprised. Then they agreed together not to come again (to listen to the Qur’an) and they said to each other “if we do like this, our slaves and children will accept this Qur’an and enter Mohammad’s religion.” But in the following night they could not endure the desire to listen to the Qur’an so much and they went again very secretly in the dark. But they encountered each other again. Once again they promised each other not to come and they left. In the third night, they could not keep their word and secretly came again. And they saw each other for the third time. This time they make a very strong promise and left. Only this event itself is enough to tell us the magnificent acoustic aspect of the Holy Qur’an and its smart eloquence. Even this feature of the Holy Qur’an can show us that the Glorious Qur’an is the word of Allah (swt) and no book can reach the level of it.

Once upon a time a Bedouin- who lives in deserts- came to the Prophet (PBUH). When he heard the following verse  فَاصْدَعْ بِمَا تُؤْمَرُ وَأَعْرِضْ عَنِ الْمُشْرِكِينَ  which means “Then declare what you are commanded and turn away from the polytheists.”  (Hijr, 15:94) he prostrated. When he was asked “Did you become Muslim?”  “No, I didn’t become Muslim, but I prostrated for the eloquence of this verse” he replied. As we see in this example, the unbelievers in the time of Prophet Mohammad (PBUH) recognized and confessed the beauty of the Qur’an even if they didn’t accept the religion of Islam.

Another miraculous aspect of the Holy Qur’an is its feature related with memorizing. Qur’an has a very beautiful fluency and appropriate manner of reading for human nature. People from any nation can start to read the Noble Qur’an with a short education even if they don’t know Arabic language. Because of all these phonetic characteristics of it, the Qur’an can be memorized very easily even by small children. Because the Qur’an is very appropriate with human nature and very easy to read. This miraculous feature of the Glorious Qur’an can never be seen in any other book. This is also a very strong evidence for the Holy Qur’an that it is the word of Allah (swt).

In conclusion, the Holy Qur’an is an ocean of miracles for Muslims, which was revealed to Prophet Muhammad (PBUH) by Almighty Allah (swt). The Glorious Qur’an represents the fountainhead of divine guidance for every Muslim. Its revelation to the Prophet Muhammad (PBUH) and his practical implementation of it completed Allah’s blessing for humanity. Every century the shiny miracles of the Noble Qur’an appear. In that case the Qur’an is the greatest book and no book can reach the level of the Holy Qur’an even if we examine only from acoustic aspect. This kind of miracle of the Noble Qur’an itself exclaims that “I am the word of Eternal Speaker” and shows the human being that the Qur’an is the ocean of miracles from every aspect.

The Miraculous Inimitability of the Word of Allah