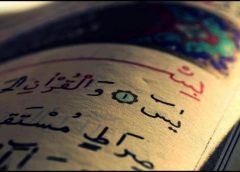 “The month of Ramadan in which was revealed the Quran, a guidance for mankind and clear proofs for the guidance and the criterion (between right and wrong).” [Qur’an, Baqarah 2:185]

In the holy month of Ramadan we have the opportunity of getting more hasenat (reward) for the prayers and the good deeds we make than usual, so we should not miss this chance which comes once a year.

The Messenger of Allah (saw) said, “When the month of Ramadan starts, the gates of the heaven are opened and the gates of Hell are closed and the devils are chained.” (Imam Bukhari)

The Messenger of Allah (saw) addressed his companions on the last day of Sha`ban, saying, “Oh people! A great month has come over you; a blessed month; a month in which is a night better than a thousand months; month in which Allah has made it compulsory upon you to fast by day, and voluntary to pray by night. Whoever draws nearer (to Allah) by performing any of the (optional) good deeds in (this month) shall receive the same reward as performing an obligatory deed at any other time, and whoever discharges an obligatory deed in (this month) shall receive the reward of performing seventy obligations at any other time. It is the month of patience, and the reward of patience is Heaven. It is the month of charity, and a month in which a believer’s sustenance is increased. Whoever gives food to a fasting person to break his fast shall have his sins forgiven, and he will be saved from the Fire of Hell, and he shall have the same reward as the fasting person, without his reward being diminished at all.” (Ibn Khuzaymah)

Abdullah ibn `Amr reported that the Messenger of Allah (saw), said: “The fast and the Qur’an are two intercessors for the servant of Allah on the Day of Resurrection. The fast will say: ‘O Lord, I prevented him from his food and desires during the day. Let me intercede for him.’ The Qur’an will say: ‘I prevented him from sleeping at night. Let me intercede for him.’ And their intercession will be accepted.” (Imam Ahmad)

We as Muslims should already read Quran regularly, and when it comes to the month of Ramadan we should increase it as much as we can. We should do it regularly and continuously.

“The most beloved deeds to Allah are those done regularly, even if they are small.”  (Bukhari, Muslim)

Jibreel used to come to the Prophet (saw) every night in Ramadan, and study the Quran with him. (Bukhari, Muslim)

We can gain a habit of reading Quran daily in this month and continue through our life. We can make a fresh start if we do not have this habit.

Rasulallah (saw) says: “Whoever reads a letter from the Book of Allah will receive a hasanah (good deed) from it (i.e. his recitation), and the hasanah is multiplied by ten. I do not say that Alif-Laam-Meem is (considered as) a letter, rather Alif is a letter, Laam is a letter, and Meem is a letter.” (Tirmidhi, Darimi)

We should not be upset if our reading is not perfect or if we are struggling to read because there is more hasenat (reward) for them.

Aa’ishah (ra) relates that the Prophet (saw) said:
Verily the one who recites the Qur’an beautifully, smoothly, and precisely, he will be in the company of the noble and obedient angels. And as for the one who recites with difficulty, stammering or stumbling through its verses, then he will have TWICE that reward.” (Bukhari and Muslim)

In the last ten days of Ramadan one of the odd nights called Laylat Al-Qadr in which Quran was revealed is more beneficial than a thousand months in hasanat (reward).

“We have indeed revealed this (Message) in the Night of Power:
And what will explain to thee what the night of power is?
The Night of Power is better than a thousand months.
Therein come down the angels and the Spirit by Allah’s permission, on every errand:
Peace!…This until the rise of morn!” (Qur’an, Qadr  97:1-5)

Allah gave us all these opportunities. We should benefit from Ramadan as much as we can.