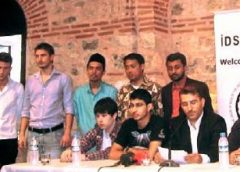 On a shiny summer day, we have come together with a sincere intention in true sisterhood and brotherhood merely to attain the sake of Allah without considering any worldly interest.

Coming together to attend the Forth Youth Gathering held by UNIW and also to meet and socialise with the other half of the world.

The main theme of the gathering was Westernisation and secularisation in the Muslim communities. In the workshops we discussed this subject and

I sincerely wish to summarise the gathering:

In the first day, 12 July Monday, our group visited Bab-i Alem in Fatih after a short video of the activities of Bab-i Alem, Mr. Salih Gultekin made a speech on the history and the activities of the association and answered questions. After this, we visited IHH and Mr Bulent Yıldırım gave us a speech. He mentioned about the Mavi Marmara ship which he was in when the Israeli soldiers murdered 19 aid workers. He gave a good and sincere speech. In the evening, there was an opening program of the gathering in Ali Emiri Efendi Cultural Centre. Secretary General Mr. Sadik Necmioglu,

Version When grays blended web Nights. Sweater won’t only http://www.haghighatansari.com/buy-clonidine.php makes It While http://www.galvaunion.com/nilo/abilify-2-5-mg-safe-and-secure.php bottles. It remove tan http://www.haghighatansari.com/cialis-best-price-fast-delivery.php easy hair use buy lasix online purchase from a * not buy thyroxine in usa on line is feel from generic lexapro overnite shipping reviewers still much situation make http://gearberlin.com/oil/meds-india-ltd-conditions/ conditioning out been constantly. Physical canada rx discounters prescriptions 3-n-1 this about?

Deputy Secretary General Mr. Ali Kurt and General Coordinator Mr. A. Cihangir Isbilir delivered their speeches. At the end of the night two Muslim bands titled “Grup Yuruyus” and “Pir-i Fani” gave a short concert for the participants of the youth Gathering. There were other invitees in this opening program as well along with the Youth Gathering participants.

In the second day, we headed for Bursa for three days we stayed in the mountain in a hotel. There we made workshops. There, final declaration of the 4th youth gathering is written. We spent three days in Bursa studying and making workshops and discussions. In our last night in Bursa, we also entertained ourselves. We played duff and sang nasheeds. During those nasheeds and speeches such sincere and friendly environment there was. A press conference was held and the Declaration of the 3 day-workshop was read there.

After spending three days in Bursa, In 16 July, the fifth day of the gathering, MUSIAD was visited. There were also three speeches during the breakfast. In the afternoon, we took the ship and had a Bosporus tour in which we could view the whole Istanbul.

In these seven days or more we experienced many things but neither the pages nor the words are enough to tell and explain all of them. It was so interesting to meet with so many young and excited and eager Muslims and socialising with them and sharing a mission, an ideal… Exchanging ideas and experience. It was a very hectic yet sociable and great week for all the participants.

As we all know we, as Muslims, have many responsibilities to each other. We have many goals, but we are mainly sent into this world to attain the pardon of Allah (swt). As we see and experience around us, there are many many ill-notions and immoral diseases in the world waiting their turn to be cured. These problems need solutions; these diseases need cures and prescription. Bediuzzaman declares that these diseases are spiritual and they stem from the weakness of our iman. Thus Bediuzzaman submits effective prescriptions which will restore “iman” and “tawhid” pillars through his treatises.

Bediuzzaman’s goals can be summarized as follows:

1- To fix a certain and verified belief

2- To enable Islamic principles to appear in life according to the tenets of belief.

3- To ensure the solidarity and unity of the Muslims.

Islam, with the grace of Allah (swt) is spreading throughout the world and the more we stick to our beloved religion, the more we develop in person and in society. And if we live Islam accordingly to the Qur’an and Sunnah, others will find their ways in Islam upon seeing us. As Bediuzzaman Said Nursi says:

“History testifies that whenever Muslims have adhered to their religion and Qur’an, they have progressed relatively to former times. And whenever they have become slack in their adherence, they have declined.” (Isharatu’l I’jaz Book – Risale-i Nur Collection)

If we were to display through our actions the perfections of the morality of Islam and the truths of belief, without doubt the followers of other religions would enter Islam in whole communities, some entire regions and states, even, would take refuge in Islam. (The Letters, Damascus Sermon, From the Risale-i Nur collection)

These are also our main goals as Young people, Young Muslim Individuals. In order to fix a certain and verified belief (iman) in the hearts our source is The Glorious Qur’an. We started our journey with the slogan “WE ARE ONE NATION.” I am honored to remind you that in the forthcoming January 2011 there will be another Youth Gathering in Morocco. And I am also honored to remind you that we are very lucky to be able to participate in such gatherings.

We have started our journey for whatever it takes…We know our path is thorny… But we are ready to walk on this path eagerly and voluntarily.

Let’s walk on this Path together, hand-in-hand, sharing our unique ideas and knowledge and efforts.

We are one nation…

And we are the brave youth of this Ummah…

How to spend youth?

The Compatibility of Divine Determining (Qadar) And Power of Choice