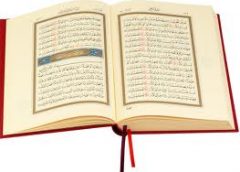 It is said that “the Qur’an contains everything.” Could you explain this sentence?

“There is not a grain in the darkness of the earth nor anything fresh or dry that is not in a clearest Book (the Qur’an)!” (An‘am: 59)
As understood from the verse, the Qur’an contains everything. But first and foremost, it must be known that the Glorious Qur’an is a Book of Worship. In order to address all levels of people, it uses expressions such as allegories and comparisons so that it can be generally comprehended. However; behind these expressions, as a result of the selection and the arrangement of the words, even of the letters; there are hidden infinite interpretations (resembling the infinite probability calculations in maths) and secret indications.

Furthermore, everything takes place in the Qur’an, in various degrees and in terms of their values. For instance, a constitution gives place to every kind of issue that the government needs as main principles and basics but not in the way that each person can comprehend with no special effort. Likewise, everything concerning the man; the past and the future, whole branches of science and wisdom; and also the whole civilization wonders take place in the Qur’an as seeds and summaries. The Qur’an informs the man with them sometimes directly and sometimes indirectly.

“Technology” in the Qur’an

The Qur’an gives us clues about the helicopters and planes which will be used in the air transportation to make people travel so easily to the farthest distances, by giving us the example of Solomon’s passage to the one month’s distance in one day by flying in the air.

“History” in the Qur’an

“Future” in the Qur’an

“(Oh Pharaoh!) Today, we will give your (drowned) corpse deliverance (by throwing you to the shore) so that you may be a lesson to those who come after you!” And no doubt, most of the people are really heedless of our verses.” (Yunus: 92)

The Qur’an indicates that the corpse of Pharaoh, who was drowned in the sea, would not decay, and would stay long for people to take admonition.

The corpse of Pharaoh was taken to the United Kingdom after it was found among the sands on a little hill which is on the cost of Red Sea by an English Research group when the Suez Canal was being opened. Though it has been three thousand years after the incident, the body of Pharaoh is still in the form of Sajda and remains intact and is shown in the famous British Museum in London. This intact corpse obviously shows the future of those who deny Allah, for this world and for the hereafter.

The Qur’an points out to Conquer of Istanbul which opened the doors of new events in the history such as Geographic Expeditions and Closing of the Middle Era leaving its place to the New Era.

“Alif. Lam. Mim. The Romans have been defeated in the intimate vicinity (of Arabs by the Persians who were idol worshippers). But they, after this defeat of theirs, will soon be victorious (to Persians) within a few years (between three and nine years). The command is with Allah in the ahead and in the end; on that day, believers will rejoice with the help of Allah. He helps whomever He wills since He is the Mighty (whom His Power is superior to everything), the Merciful (whom He cares with the most compassion).” (Rum: 1-2-3-4)
In this ayah revealed approximately 7 years after the heavy defeat of Christians.

Byzantine by the pagan Persians, it is pointed out that the Romans would beat the Iranians. If we look back at the history, approximately 7 years later than the revelation of this verse, around the Ninova ruins, the information of Byzantine Empire’s victory against Persian Empire it can obviously be seen that this came to reality.

“Beside him, a person, (called Asaf bin Barhiya), having knowledge of book said: “(In the time of) twinkling your eyes before it (your glance) returned to you, I would bring it to you.” (Naml: 40)

“Literature” in the Qur’an

“So proclaim that which thou art commanded, and withdraw from the idolaters.” (Hijr: 94)
Even though the deniers don’t believe, literary aspects of this Qur’anic verse made them prostrate.

As is known that Arabic is the most perfect language among the world languages with regard to its supremacy in the way of rhetoric, literature and the fasahah (sound, rhythm and sentence structure.)

For all the verses of the Qur’an, famous people such as Saqqaki, Zamakhshari, Jurjani and many masters in the science of eloquence approved with consensus that literary aspects of the Qur’an is far beyond the reach of people.

“Justice” in the Qur’an

“And approach not the wealth of the orphan save with that which is better (to keep it and with the aim of doing good to the orphan), till he reach maturity. Give full measure and full weight, in justice. We task not any soul beyond its scope. And if you give your word, do justice thereunto, even though it be a kinsman; and fulfil the covenant of Allah (the word you promised). This He (Allah) orders you that haply you may take admonition.” (An’am: 152)

Quite a few verses of the Qur’an point to some principles which should be paid attention in the welfare of one’s life.

“For that cause We decreed for the Children of Israel that whosoever killeth a human being for other than man slaughter or corruption in the earth, it shall be as if he had killed all mankind, and whoso saveth the life of one, it shall be as if he had saved the life of all mankind. Our messengers came unto them of old with clear proofs (of Allah’s Sovereignty), but afterwards lo! many of them became prodigals in the earth.” (Maida: 32)

As we understand from this verse, the Qur’an shows us the real justice, because the deictic meaning of this verse goes like this:

“The rights of an innocent man cannot be cancelled even for the sake of the entire nation. Even a single individual may not be sacrificed for the welfare of all. In the compassionate respect of Allah the Almighty right is right; there is no difference between great and small. The small may not be abolished for the great. Without his consent, the life and rights of an individual may not be sacrificed for the welfare of the all. If he consents to sacrifice them in the name of patriotism then that is another issue.” (The 15th Letter-From the Genuine Ottoman Script of the Risale-i Nur Collection, Bediuzzaman Said Nursi)

“Science” in the Qur’an

In this verse, the Qur’an mentions the stages of the creation in the uterus respectively with the expressions “علقه” (clot, clinging to the uterus), “مضغه” (little lump of flesh), “اعظام” (bones), “لحم” (flesh).

Today according to the discoveries of the modern medicine, the embryo in the mother’s womb, follows the order shown above, and at the beginning it is in a size clear enough to be seen by the naked eye but unclear to see in details. Bones take their shape in the future.

“We have built the heaven with might, and We it is Who make the vast extent (thereof).” (Dhariyat: 47)

For the first time since 1992, the model of expanding universe was supported and in 1929 this model was formulized. But the Qur’an had informed mankind about “broadening of the universe” 1500 years ago.

The Qur’an , by showing Jesus who opened the eyes of a blind man and resurrected the dead, points out that illnesses such as cancer, aids and even death are all treatable.

“Reflection and Contemplation” in the Qur’an

“…Thus Allah maketh plain to you (His) revelations, that haply ye may reflect.” (Baqara: 219)
“…Have ye then no sense?” (Ya-seen: 68)
“…Little do you reflect!” (Ghafir: 58)
“…Lo! herein is indeed a lesson for those who see.” (Noor: 44)
Humans have the ability to think and devise. In these verses, the Qur’an invites us to think about the humanity, the entire universe and its functioning and the divine wisdom of creation.

Thus the Qur’an guides people by showing that there is no contradiction between religion and logic, wisdom and intelligence.

“Natural events” in the Qur’an

The Qur’an points to many natural events such as rain, lightening, wind, the formation of night and day, periods of the months and days, the creation of the heavens and so on.
“Have you not seen how Allah wafts the clouds, then gathers them, then makes them layers, and you see the rain come forth from between them; He sends down from the Heaven Mountains wherein is hail and smits therewith whom He will, and averts it from whom He will. The flashing of His lightning all but snatches away the sight.” (Noor: 43)
“Allah is He Who sends the winds so that they raise clouds, and spreads them along the sky as pleases Him, and causes them to break and thou sees the rain down pouring from within them. And when He makes it to fall on whom He will of His bondmen, lo! They rejoice…” (Room: 48)

Rain has three stages; forming of wind, gathering of the clouds and emergence of the rain drops. The Qur’an revealed this fact fifteen centuries before today’s scientists who have recently uncovered these facts with the help of airborne radars.