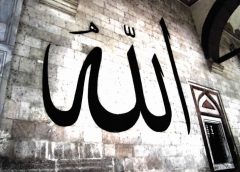 Attributing a form to Allah Subhanahu wa Taʿala is haram (prohibited). It is not possible to grasp the entity of Allah (swt), because “there is none comparable unto Him,” (Ikhlas, 112:4) and “vision comprehends Him not.” (Anʿam, 6:103) Mind can only comprehend those which are material; however, Allah (swt) is not material. All beings whether we can perceive with five sense organs or not, have been created by the Creator Who is Glorified. Creature is neither a part of nor like the Creator. (Shamil Islamic Encyclopaedia)

“Substance is a composite that comes into existence through the combination of some matters and also needs a place. To be composed and to be in need of place are the signs of being created.” (Fiqh al Akbar, Al Sharh al Aliyy al Qari)

Since Allah (swt) resembles none of the creatures, it is impossible for human mind to imagine Him

If somebody is talking about an object unknown to us and that we have never seen, we try to understand it by asking questions like “How is it? What is it like?” Because there are two ways for humans to comprehend such objects: one is to try to comprehend it by the help of some similar objects; the other way is to try to understand it by the help of objects carrying opposite properties to it. But Allah (swt) is free from having similarities and opposites. That’s why; it is not possible to comprehend the form of Allah (swt) and compare Him to His creatures.

What does “Allah created Adam in his own image” mean?

“Allah, the Exalted and Glorious, created Adam in His own image with his length of sixty cubits, and as He created him He told him to greet that group, and that was a party of angels sitting there, and listen to the response that they give him, for it would form his greeting and that of his offspring. He then went away and said: Peace be upon you! They (the angels) said: May there be peace upon you and the Mercy of Allah, and they made an addition of ‘Mercy of Allah’. So he who would get into Paradise would get in the form of Adam, his length being sixty cubits, then the people who followed him continued to diminish in size up to this day.” (Muslim, The Book Pertaining to Paradise, 6809)

The possessive pronoun ‘His’ in the hadith may refer to either ‘Allah’ (swt) or ‘Adam’. The scholars have considered the two possibilities and interpreted according to both meanings as the following:

If ‘His’ refers to Allah (swt), then the hadith sounds like comparing Allah (swt) to human being. However, Quran states that there is nothing like Him. Regarding this point, scholars declared that the hadith does not imply a physical or material similarity but implies that Allah (swt) has bestowed some of His attributes upon mankind such as ʿilm (knowledge), hayat (life), samiʿ (hearing), basar (seeing), kalam (speaking) in so small extents that are never comparable to the extent that He has.

If the pronoun refers to Prophet Adam, then the hadith means, “Allah has created Adam with the image which Adam had on earth.” In other words, “The image of Adam he had in paradise was the same with the one he had on earth. He wasn’t created by stages as the other people were. (Nuh, 71:14) His image didn’t change.” As it is known, human goes through many physical stages throughout his life cycle such as embryo, foetus, childhood, puberty and adulthood; and his image changes and changes. This hadith indicates that Adam did not pass through these stages and when he was created his image was the same with the image he had when he passed away. This interpretation is more proper. (Kutub al-Sittah)

Allah manifests Himself in the universe through His Names and attributes

Allah (swt) hides Himself from the physical eye but manifests His existence to the ‘eye of the mind’ through His names and attributes in His creations, through the books and prophets that He sent. Whoever reads Allah’s books, listens to His prophets and carefully examines the book of universe that He created, can recognize Allah (swt) with His Names and attributes.

Those who take their minds out of the dark tunnels of their ‘selves’ and look at the universe can see Allah (swt) clearly. They can comprehend that Allah (swt) hides Himself because of the enormous magnitude of His manifestations and notice that Allah (swt) has created this universe in the form an exhibition, displaying His Names and attributes to introduce His excellent existence.

It is in such a way that when we observe the universe, we notice that it functions in the appearance of a magnificent palace. The sun and the moon are the lights of this palace; the stars are the candles. Anything ranging from the subatomic particles to the sun serves the human beings who are the blessed guests of this palace. When we do not observe this universe in the name of Allah (swt), it converts into a dungeon.

Do you think that the sun rises because it feels pity for the dwellers of the earth? Is it the cloud that has mercy for the living beings and so bestows rain upon them? Or did the oxygen and the hydrogen decide to form water because they contemplated the situation of the people, the animals and the plants and perceived their extreme need? You see how things become absurd when considered out of faith. Whereas such a gorgeous compassion fills the universe that warms our souls and fills even our hearts. However, since the imprudent and ruthless eyes which are unable to see the facts do not observe the universe in the name of Allah (swt), they vulgarize the miraculous functions and attributes and consider them as the acts of unintelligent, unconscious and blind elements.

The regular action: Feeding with the best food that is milk

The one affected by the action: Infant people and animals

The excellent attribute: Mercy and compassion

The one affected by the action: All plants, animals and people on the earth

The excellent attribute: The Merciful, the Compassionate

The one affected by the action: All creatures

Allah manifests Himself by answering prayers

All needs (even the tiniest) of all existences are provided without ever being forgotten; all wishes are heard and all desires are answered.

“(My Beloved! O Muhammad!) If My servants ask of Me to you, there is no doubt that I am very close (to them). I answer the supplication of the suppliant when he prays to Me; therefore they should (also) comply (to My call) (for My sake) and believe in Me so that they may find the true path.” (Baqarah, 2:186)

Allah will demonstrate His Jamal (Beauty and Perfection) in Paradise

“There are many faces bright on that day (of the hereafter)! They are the gazers at their Master! (They are honoured by the sight of Allah’s beauty!)” (Qiyamah, 75:22-23)

Cabir Ibn-u Abdillah Radhiallahu ʿanhu narrates: “Rasulullah (saw) said: While the people of paradise (Jannah) live among blessings there shines a light. They immediately look up. They see Allah (swt) close to them and saying ‘Peace be upon you, O people of Jannah!”

This is the situation which is mentioned in the Qur’an as, “A Peace there is unto them from the Merciful Lord!” (Yasin, 36:58) They look at Allah (swt) and He looks at them. They don’t pay attention to the blessings around them in Jannah as long as they are watching their Lord. This continues until Allah (swt) covers Himself. Allah (swt) covers Himself but His light and blessing are always upon the people of Jannah and their place. (Kutub-u Sitta)

As clearly understood from this ayah and hadith, all the people of Jannah, regardless of man or woman, will be able to see Allah (swt) in the hereafter.

*This article first published on www.askaquestionto.us

3 thoughts on “Does Allah have any physical form or shape?”