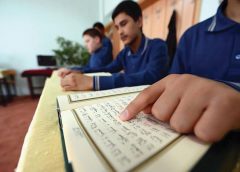 Huffaz* are the beloveds of our Prophet who praised them many times.

Huffaz are the servants of the Qur’an and the actual manifestations of the kalām (word) of Allah Subhanahu wa Taʿala. They are the carriers of the ‘nur’ dating back from the Age of Bliss to the End of Time; because they work for Kalāmullah (the Word of Allah) day and night. They spend their time for the sake of Allah (swt). They are the friends of the Qur’an, hafiz of the Words of Allah (swt). The Qur’an, as it were, is a rose, and they are its nightingales. All favour and honouring to them come from Allahutaʿalā; praise and compliment from the Honourable Prophet Sallallāhu Alayhi Wasallam. See how our beloved Prophet (saw) pays a compliment to the huffaz of the Qur’an:

“The one who is proficient in the recitation of the Qur’an will be with the honourable and obedient scribes (angels).” (Bukhari)

“Anyone who memorizes the Quran by heart and follows the lawful and the prohibited according to it, he will be sent to Heaven by Allah.” (Tirmidhi)

“The one who becomes hafiz and recite Qur’an is together with the noble angels.” (Bukhari)

Huffaz, who enlighten their minds with the Kalāmullah – the most perfect book of this great book of universe ever, get praise and compliment from the Prophet Muhammad (saw), the most precious person of the universe. These servants of the Qur’an are so valuable that having them being in trouble hurts the Prophet (saw) very much.

In the fourth year of the hijrah (emigration), Beni Lihyan brutally martyred 70 huffaz and teachers of the Qur’an in the place of Bi’ri Mauna. This event made the Prophet (saw) cry; and his companions cried as well.

We call out to the Age of Bliss from here:

“O Messenger of Allah! Do not worry. We raise many huffaz who will comfort you, relieve your pain and gladden your heart. Many heroes are being brought up. Many servants of the Qur’an are growing who separate the truth from the falsehood, turn the dark night into daylight, and even amaze the angels. They are fulfilling a duty which is fardh al-kifayah so that the responsibility of the people is absolved.”

However, it is very difficult to preserve the Holy Book that we recite in our minds and chests in this awful age. If we forget Kalamullah, do not follow the orders, and do not abstain from the prohibitions, we will be the object of the following hadith:

“Whoever memorizes the Qur’an and then forgets it will be raised as a leper on the Day of Judgement.” (Abu Dawud)

In order not to be the object of this hadith we support ourselves with the lessons that the Risale-i Nur gives us, and try to hold on to the Qur’an.

Suggestions to the Ones who try to be Hafiz

We must bear in mind that the divine grace is together with the ones who make self-sacrifice for the sake of Allah (swt). To be a hafiz is a sacred duty. Here are some advice to our brothers and sisters who work hard to be hafiz:

We go through many tests and difficulties during the time we train to be hafiz. Actually this shows how being hafiz is valuable and esteemed in the sight of Allah (swt).

Since there are many obstacles before great works of good, and satans put up a powerful struggle against those who assist those works, we should say “The success that Allah (swt) is pleased with requires self-sacrifice,”  and put up with all kinds of difficulties firmly.

“No wind favours one who has no destined port,” Montaigne says. We must have an aim so that we reach success. A tree cannot grow easily. The harder the wind blows, the stronger the tree becomes. Hardships are the ornaments which increase the value of the success.

Bediuzzaman Said Nursi says, “Draw the sword of ‘La taqnatu’ against the hopelessness.” That is, do not lose hope in the mercy of Allah (swt). If we take such lessons as our guide, we will feel the divine favour closer inshā Allāh.

*Huffaz is the plural of ‘hafiz’ which means someone who has completely memorized the Qur’an – cover to cover, letter by letter, dot by dot, jot by jot.

One thought on “Amirs of the People of Paradise: Huffaz of the Qur’an”