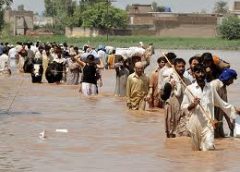 Hot dishes and tasty meals with nice and warm atmosphere in our house… Relatives are coming and children are playing. It is about to break fast.

Suddenly… We hear the heart-wrenching disaster news in Pakistan.

We learn that they have nothing but their bodies left. Everything has been demolished. They have been struck by massive floods. Millions of people have been affected by devastating flooding meanwhile we are sitting back in our comfortable chairs and watching “funny” shows.

Our brothers and sisters are suffering and sufficient struggle hasn’t been observed in the Muslim world yet. The UN pays a visit which will actually not help a lot. According to the humanitarian aid organizations, Haiti is still destructed more than a year after those celebrated UN visits, and promises of rich countries are all waiting at the hands of the UN. It must be done by civil NGOs and I call people for urgent action and help for campaigns.(It’s another story) We should do as much as we can.

My heart felt sympathies go out to the victims, and I pay condolences to the families of those who have lost their lives. I wish quick recovery and shifaa for those brothers and sisters and pray that they will be safe and secure back again at their homes. Whereas we talk about those disasters, there are certainly some questions popping out in our mind, aren’t there? One of them is below: Muslims are generally subject to natural disasters, earthquakes and the like, however non-Muslim countries do not seem to have affected as much as Muslims been. Why do Allah allow believers to suffer in the world?

Similar questions are quite normal these days and must be answered. The answer is very clear. Major crimes and biggest violence are postponed to be judged in supreme courts as they are crucial and have to be fairly judged. Senior prosecutors and jurists are appointed for them. On the other hand, minor crimes like robbery or whatever are quickly tried and the guilty are punished in small courts under ordinary laws.

Similarly, most of the crimes and mistakes of people of denial (kufr) are postponed to the Highest Court in the hereafter and they will be tried up there. Thus some of minor mistakes of Muslims are seen here and they get punished rapidly, which are the misfortunes happens to them (like earthquakes, tsunamis, etc)

On the one hand, this world is the place of examination and we are responsible for believing in the ghayb (the unseen). There are many veils between us and Allah (SWT) , and His Divine laws (on nature) and heavenly events are numerous. We may not know or understand every each of its wisdom of every action. On the other hand, most importantly; those innocent people who passed away under the heavy wreckages or got drowned in the muddy mass floods, or burnt in terrible fires are all regarded as a level of shaheed (martyr) and their lost and ruined property are counted as sadaqah (charity).* Lessons I Understand Apparently they died, some lost their properties, others families and most of them suffered but they will get more than they deserve in the hereafter. Guess what would happen if they had lived twenty more years. Would they become shaheed or would they give all their belongings and have loads of credits enough to earn paradise, or would they be ordinary people? In deed, this is mercy fort hem if we evaluate it from the perspective of hereafter. What’s more, these disasters are a kind of warning for us as well. Because Allah (SWT) says in the Qur’an: “Whatever misfortune happens to you, is because of the things your hands have wrought, and for many (of them) He grants forgiveness.” (Surah Al-Shura, 42:30) What we must do – if any misfortunate happens to us – is to check out our deeds and revise what we have been doing, improve and correct ourselves immediately so that we can be from further punishments. When we read the news we feel so much depressed and question how come… After learning some accounts of wisdom behind those we feel a bit relaxed, we should but not physically. We mustn’t stop contributing for them. What else can we do? • Du`a. Pray for them. • Donate food and clothing. There are organizations that are working to ship in-kind donations to Pakistan. • Spread Awareness. This can be as simple as changing your Facebook status. • Fundraise. If you’re on campus, have a bake sale or pass around a coin jar in your classes. Have a fast-a-thon to raise funds. • Brainstorm. What else can we do? Share your ideas in the comments. Once again, I pay condolences to the families in Pakistan and brothers and sisters in the UK who have relations there. May Allah give sabr (patience) to those suffering and give feeling of mercy to the humanity to help more. Wassalam

*(For further readings on the Qur’anic perspective to those events, earthquakes and disasters, please refer to Imam Bediuzzaman Said Nursi’s famous book, Words (Al-Kalimaat), Addendum of the 14th Word)

One thought on “Disasters: Why Muslims?”