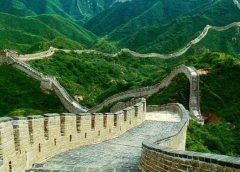 Throughout human history, man had built up many archeological structures. Most of them were fortified castles and cities by strong walls as a defense mechanism. Those castles, city walls, great barriers were both the signs of the power and the fear from the invaders. Some of them are clearly showing us the importance of the security for a state would reach such levels. The constant raids and invasions of one tribe, or a state to another one produced these constructions. The Great Wall of China is one of the massive examples of the constructions. Continuous raids from the north forced Chinese khans to build it. Another example to the subject is the Great Iron Wall of Dhul-Qarnayn.  Unlike the others Dhul-Qarnayn’s wall was from iron. Because of the material of the wall and the enemy, Gog and Magog, this has been a very interesting subject for many people.

When people hear the two names they ask; where is the wall of Dhul-Qarnayn? And who were Gog and Magog? According to the Qur’an, after Dhul-Qarnayn’s travel to the west he went to the east direction. He met with one tribe in this direction and he continued his travel until he reached between two high mountains. He found a tribe near the place. They wanted help from him against the raids and mischief of Gog and Magog. “Dhul-Qarnayn, whose guidance resembled the guidance of the Prophets, built a barrier between the oppressor and the oppressed peoples, preventing raids by cruel tribes.”[1] The parable of the Dhul-Qarnayn’s travel to the east comes as follows:

“(88) Then he followed another way, (89) Until, when he came to the rising place of the sun, he found it rising on a people for whom We had provided no shelter against the sun. (90) So (it was)! And We knew all about him (Dhul-Qarnain). (91) Then he followed (another) way, (92) until, when he reached between two mountains, he found, before (near) them (those two mountains), a people who scarcely understood a word. (93) They said: “O Dhul-Qarnain! Verily! Ya’jûj and Ma’jûj (Gog and Magog) are doing great mischief in the land. Shall we then pay you a tribute in order that you might erect a barrier between us and them?” (94) He said: “That (wealth, authority and power) in which my Lord had established me is better (than your tribute). So help me with strength (of men), I will erect between you and them a barrier. (95) “Give me pieces (blocks) of iron,” then, when he had filled up the gap between the two mountain-cliffs, he said: “Blow,” then when he had made them (red as) fire, he said: “Bring me molten copper to pour over them.” (96) So they [Ya’jûj and Ma’jûj (Gog and Magog)] could not to scale it or dig through it. (97) (Dhul-Qarnain) said: “This is a mercy from my Lord, but when the Promise of my Lord comes, He shall level it down to the ground. And the Promise of my Lord is ever true.” (98) And on that Day [i.e. the Day Ya’jûj and Ma’jûj (Gog and Magog) will come out], We shall leave them to surge like waves on one another, and the Trumpet will be blown, and We shall collect them (the creatures) all together.”[2]

It is clearly known that the history of world had many barriers like Dhul-Qarnayn’s. Some other powerful world-conquerors and kings constructed barriers between mountains and strongholds on mountain tops that were important means of saving the oppressed from the oppressors. They built them either with their own material power or gave guidance and instruction for their construction. They then built walls around towns and citadels inside them, and later made artillery and battleships.[3]

“Like the Great Wall of China, which covers a distance of thousands of miles, which for centuries prevented the assaults of those savage peoples, some other barriers were also constructed through the efforts of certain Dhul-Qarnayn-like Persian kings in the mountains of Caucasia, in the region of Darband, to halt the assaults of some northern pillaging peoples.

There are many barriers of this kind. Since the wise Qur’an addresses the whole of humanity, by mentioning a particular incident exemplary of its sort, it is referring to all similar incidents. It is for this reason that the narrations and the views of the Qur’anic commentators about Dhul-Qarnayn and the tribes of Gog and Magog differ.”[4]

Then who were the Gog and Magog, why are they so famous? Indeed, they were the savage tribes that are mentioned in the Qur’an as Ya’juj and Ma’juj (Gog and Magog) and otherwise known as the Mongols and Manchurians, several times raided and destroyed the civilized world of humanity from the east to the west.[5] It is believed that they will destroy the world as they did in the past.[6]

Briefly, the Iron barrier of Dhul-Qarnayn was not found by archeologists. Thus, the Barrier was or will be destroyed. Even though it suffers damages from convulsions through time, for the most part it can remain intact. For instance, being one of the examples of the Barrier of Dhul-Qarnayn, the Great Wall of China has survived for thousands of years. It is interpreted as a long meaningful, petrified line from ancient history written by the human hand on the page of the earth.[7]

First article on the subject: Dhul-Qarnayn

One thought on “Dhul-Qarnayn-2”