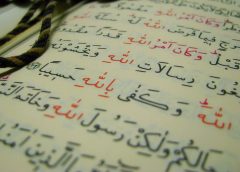 “Whatever befell the children of Israel will all befall my people step by step. If one of them openly commits adultery with his mother, there will be one out of my people who will do this. The children of Israel divided into 72 nations. My people will divide into 73 nations (sects). All except one nation (community) among are doomed for Hell.” They asked, “O the Herald of Allah! Which (nation) is that?” He said, “Those who are in my and my companions’ way.” (Tirmidhi , Ebu Dawood, Taberani)

Let’s assume that you just read a book and understood it. Well, do the meanings that you understood match those that the author really meant? Are they exactly the same? It ıs always possıble that we mısunderstand the text or extract a meanıng that the author did not mean at all.

Misunderstanding or being misunderstood is very usual while communicating with people.
We often extract meanings out of a book different than what the author has intended, if we approach the book or its author with prejudice or if we are seeking in it ideas to suit our perceptions. However, if we seek to find out and understand what the author intends to convey, then we may understand the meanings that are really meant. Our approach determines how well we understand the real intended meanings.

The difference between what we comprehend and what is meant may not be too important, if the book is authored by a human being. However, if the book belongs to God the Creator of the universe and everything in it, then it matters infinitely. For, if we as Muslims do not understand correctly what Allah means in the Quran, we may face bad consequences in our lives both in this world and in the hereafter.

We should study the Quran to find out and understand the will of Allah, as opposed to deriving meanings as we like. We should not use the Quran to ratify our own views, but rather to sincerely learn what Allah wills to teach us by it. Our attitude towards the Quran should carry the sincere effort to be sure to extract meanings that Allah is consent with. How can we do this? Are there ways to assure that what we understand of the Quran is in line with what Allah means and is consent with?

The Criteria of Interpreting the Quran – The Methodology of Commentary on Quran
The Commentary Science involves the methodology to extract the meanings out of Quran that are meant by Allah as much as humanly and linguistically possible. (Tefsir Usulu ve Tarihi – The Methodology and History of Commentary, Muhsin Demirci, p. 86, Menahilu’l-Irfan, b.2, p.96) The commentator cannot freely give meanings but should only disclose those that are in accordance with Allah’s approval, the criteria of which are based on the Quran and the life of Prophet Muhammad. The Commentary Science establishes the methodology to use these criteria.

The Imam Rabbanî (may Allah be pleased with him), in the 193rd letter of his Mektubât (The Letters), says that “Not all the understood meanings taken from the Quran and from the sayings of the Prophet are acceptable.” For, the understood meaning can be different than what Allah and his Prophet has meant. All deviant sects showed some verses of the Quran to prove their ideas. The Community of Followers of the Prophet (Ahl al-Sunnah wa’l Jamaa’ah) rejected these arguments since such interpretations of those verses were not in line with the rest of the Quran and the will of Allah again established by the Quran and the Prophet’s life.
The books on Commentary Science establish the methodology and the criteria to distinguish the meanings that are in line with Allah’s will and that are not. In general, most of the Commentary Science books list the following four criteria (See, Muhtasar Tefsiri, Ibn Kethir, vol.1, p.12, Darul Quranul Kareem, 1993, Beirut).

First Criteria: The Quran interprets the Quran itself. Many verses explain many others. One should understand the Quran as one interlocked entity and search the relation of a verse with the rest of the Quran. Allah answers those who deny that the Quran is from Him by challenging them to find inconsistencies or errors in it. Therefore, verses cannot falsify each other and no verse can be interpreted singly and independently of the rest of the Quran.

Second Criteria: The sayings, actions, and the consent (the Sunnah and the Hadith) of Prophet Muhammad interpret the Quran correctly. The Prophet Muhammad’s sayings and actions can in no way conflict the Quran. Since he (asw) is the first addressee of Allah’s revelation of the Quran, no doubt he is the best to understand fully what Allah means in the Quran and act and rule accordingly.

Fourth Criteria: The followers of the companions and in turn their followers interpret the Quran appropriately.

Hence, any commentary on the Quran that fulfills these four criteria as well as the rules of the Arabic can be considered appropriate.

Commenting on the Quran at will
A person may not abide by these criteria, and read and understand the Quran as he or she wills. We do not say anything against this, since every one is free to think the way they like, as long as they are ready to give account of their lives in the presence of the Creator. If one goes beyond the freedom of thinking, and disseminates his/her own unsubstantiated derivations out of the Quran, this is tantamount to saying something on behalf of Allah and thus forging a lie against Allah. Such an act faces the threats of the verse and the saying of the Prophet at the beginning of this article.

“Those who are in my and my companions’ way.”

The Prophet (asw) has declared:

“Whatever befell the children of Israel will all befall my people step by step. If one of them openly commits adultery with his mother, there will be one out of my people who will do this. The children of Israel divided into 72 nations. My people will divide into 73 nations (sects). All except one nation (community) among are doomed for Hell.”

They asked, “O the Herald of Allah! Which (nation) is that?” He said, “Those who are in my and my companions’ way.” (Tirmidhi , Ebu Dawood, Taberani)

Those described in Prophets’ saying (asw) by “Those who are in my and my companions’ way,” is called the “community of followers of Prophet Muhammad and his companions (Ahl al-Sunnah wa’l Jamaa’ah).” At present and throughout the history, this community has been forming the majority of the people of Muhammad (asw) and understood the Quran in accordance with the four criteria and abode by it in their tenets of faith and ways of worship. Their opponent groups are called as “the deviators” and “the falsehood inventors” have almost always defied the four criteria and interpreted the Quran at will to justify their perceptions. They either metaphorically interpreted the obvious verses, or rejected the Prophet’s sayings, or accused the scholars of the community of followers of the Prophet and his companions of not comprehending the Quran (“the genuine scholars”).

Two groups: One sincere and righteous, other either mindless or devil-minded!

The eminent scholar Bediuzzaman Said Nursi says of those who accuse the genuine scholars of not having understood the Quran properly: “There are two aspects of the idea that asserts ‘People cannot understand the subtleties of the Quran; the commentators could not understand its real meanings.’ And there are two groups who say this.”

The First Group: The righteous scholars who are sincere deep researchers. They say, “Quran is an endless treasure. Every century accepts the axiomatic information of the Quran (nusus) and its rulings, and abides by them. But in addition, every century discovers its specific share out of Quran’s less obvious information as if in the form of appendix, and does not interfere with the undiscovered share of other centuries.”

Indeed, this means that the information of the Quran is discovered more and more as time passes. Otherwise, it is severely wrong to claim that the true and obvious meanings of the Quran that the Virtues Generations has declared are doubtful. The faith requires acceptance of those meanings since they are axioms, certain, essential, and fundamental. By the rule that لسان عربي مبين هذا, it declares that its meanings are open and clear. Throughout the Quran, the address of Allah deals with those meanings, supports them, and expounds on them to make them obvious. Refusing those meanings is equivalent to giving the lie to Allah and underestimating the Prophet’s comprehension.

The Second Group: They are either mindless friends who are poking the eye while fixing the eye brows; or a devil-minded who is trying to oppose the rulings of Islam and the truths of faith. He is trying to find a passage through the concrete verses of the fortress of the All-Wise Quran. Such people are inventing these ideas to attach doubts upon the truths of faith and the Quran. (First Remark, 29th Letter, The Letters).