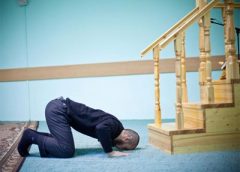 Yesterday I saw a group of young boys. They were at least seven or eight in total. I guess they were at high-school. These days were Ramadan. They had sandwiches in their hands. They were attracting a lot of attention with their more than trebled earrings and tattered, worn and torn clothes. Their noise simply filled the whole street.

After they leave, there were only their leftovers, a couple of cigarette stubs and reflections of the rude and bad words they called each other. And a sheer silence…  A strange and weird silence was this. It didn’t allow me say “Ohh!” I couldn’t say “Ohh, they are gone and peace is here.”…

Sadness was all they left to me… And the feeling of responsibility, compassion and supplication (du’a)…

I tried to see these ill-mannered and dirty-minded youths as my relatives.  Afterwards I felt much closer to those youths and tried to see them as my brothers and sisters. And later on I called them “son, daughter” feeling them as parts of my being. How could I get angry with them? How could it be possible? How could I condemn them? How could I say “It is none of my business, they will go their own way.”? When my son or daughter walks through hell how could I stay uninterested?

When I see a young person who is level-headed, humble and decent,  I feel  good to him/her, relief and happiness occurs and makes our tongues say unintentionally ”Mashaallah”, Barakallah. But these impudent young people taught me a lesson that day. They taught my heart the compassion, my lips to pray, my conscience to live with what I know, to practice my knowledge. More compassion, more supplication and living what you preach in your life more than just speaking…

CASUALTIES OF THE CORRUPTED CIVILIZATION

Is the only reason for these innocent youths who were indeed born in the disposition of Islam to be constituted as the sinners society is their being insensible and ambitious to commit sins? And Is it only they who are responsible to them?

Suffering the pain of incapabilities while being surrounded by temptation and struggling not to lose mind.

Being a young person belonging to a family which is supposed to be the seed of the society tree, but unfortunately dominated by the dissension and anxiety lacking of fondness, obedience, courtesy, safety and dialogue because of the negative effects of freedom lectures of today’s so-called civilized societies. And while desiring to escape from the uneasiness ending up in captivation of the civilization fantasies which result in the everlasting uneasiness.

And then, to be a young person having parents who have forgotten that their child is a precious one given by Allah under their custody.

There is a nation raised by the parents who are gravitated by the temporary positions and grades. To be a generation, living under the attitudes and manners of parents who appear to be memorials of compassion, sometimes showing their dedication by divulging all the things that they have, but not even showing a little bit of worry about the true futures of their children which is the eternal life after the life of grave.

Such that, being a young person in a society, in which ignorance is not regarded as strange, in which education is highly ignored, watching is preferred to reading.  To be an individual in a society which is in a collapse in terms of morals and faith by the using even technological blessings for his/her retrogradation and destruction of his/her morals instead of improvement.

The casualties of a corrupt civilization and the products of a mentality that only aims the joys of this world are we.

Today, civilization delivered all kinds of its toys in front of us. But it cannot feed the spiritual hunger in our souls of which sustenance is worshipping and remembering Allah. Yet again, we reach for the fantasies of civilization as though we wish to silence the “Eternity! Eternity!” clamors of our conscience ascending more day by day.  But, which fantasy of civilization has been able to silence the clamors of our conscience so far? When the worldly pleasures we cravingly reach for leave us, we would fall in the middle of nowhere with bitter grief as we couldn’t find what we hope. And yet again, we would try to reach for another civilization toy to console ourselves, but we would be disappointed again and experience the same bitter frustration. And yet again, the toys of civilization..  Losing again.. Being-left-alone again. And pains and clamors and screams again…  Thus, while the vain opposition of our souls is going, a society comes into existence out of the youth whose mental and spiritual health has already been distorted and who is scattered as a result of worldly pleasures and who doesn’t have any purpose and ideal in his life.

I strongly felt the importance of compassion in the solution of these problems while I was thinking of some of the reasons that give bad results for the youth. Yes, compassion is such important thing; but how deficient are we in this lofty trait!

Being the servants of Allah, who expresses his boundless compassion and mercy saying “My Tolerance supersedes My Wrath”, Why do we easily go beyond the limits by coming to be so bold in condemning others for the mistakes that they do? And, indeed, isn’t it with the blessing of Allah, who likes to forgive and who doesn’t hurry to punish, that we breathe and eat and drink despite of the fact that we are sinners?

While we are praying with downcast eyes-crying and saying “What will we do in the hereafter?”, don’t we find ease and consolation by contemplating Our Prophet Muhammad (pbuh)’s being much more compassionate than the other prophets and his wish to intercede and supplicate for his Ummah’s deliverance as stated in the verse “There has come to you such a (honorable) prophet among yourselves that your grief weighs heavily to him; he is much concerned for you, much compassionate much merciful towards the believers.” [Surah al-Tawbah: 128] It is stated that Allah told Musa (as) in return of his compassion for the all beings: “I nullified you true, and treated with prophethood as a necessity of your mercy for all beings.” This shows that mercy is a kind of divine and prophetic attribution to attain the honour of prophethood.

The prophetic attribution, mercy, is seen on the entities who are in the position of prophetic inheritance that a great example of this is his Excellency Bediuzzaman saying: “There is a great fire in front of me; of which flames are reaching the sky. My son, my faith is burning inside. I am running to save my faith, to extinguish that fire. What importance is it that somebody wants to trip me up on the way and my feet hit him?”  Bediuzzaman is a great hero of mercy who sacrificed a lot for the salvation of future generations heroically preferring the cold and heartless laps of jails and exiles maybe with thousands of mothers’ mercy as the mercy of a chicken which attacks a dog in order to save its chick’s life. And as a result of this mercy, with the truths of faith and Qur’an that he is bestowed to write, he saves the faiths of millions of people and turns their worldly lives and afterlives into happiness, and we would be the witnesses of his being an inheritor of prophethood.

In comparison to that great mercy, I realized how dwarfed my mercy and compassion was despite being called as a female individuals of this society who are the heroes of mercy and I felt so ashamed of myself. How much do we care for saving our contemporaries from the allures of the sins? How much do we care for the thousands of people who may lose their faith in their last breaths in the hands of the angel of death? How much do we pray for the youths whose faith, moral and humanity are in the thrones of death between the claws of civilization?

More mercy, more prayers and living what you preach in your life more than just speaking…

Nowadays, it is not easy to be a young person having eternal lofty ideals such as posing a good example of Islam and using his abilities and skills not only for his individual development but also for the development of Islam, thus who works for both the material and spiritual deliverance of the humanity.

I know that it is not that easy for everyone to say “It is a duty and an honour to serve for faith. I must be honored by appointing it as the purpose of my life.” The value of a man is up to where his ideals and benevolence reach. No matter how perfect a man is, he is still nothing if he lives only for himself or only for his worldly life or bases his ideals only on the transient things. He lives, he dies and he is forgotten.

I also am a young person. It is our destiny to be born into this world in a century in which the so-called civilization beast swallows the new generations. Well, then! What do you say to be Moses who was brought up in Pharaoh’s Palace and to be Asiya who brought up Moses?

Don’t get lost in the transitory; don’t forget that eternity is created for you!

How to spend youth?

A Generation Knowing Their Prophet