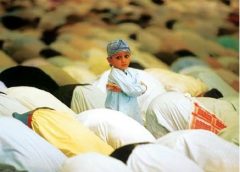 Does knowing the life of Prophet (PBUH) mean really knowing Him? Not in my opinion! To know your Messenger is not just about knowing who he is or his life story. In this context, I probably would not be wrong to say that the current biographies of Prophet are insufficient in some aspect.

Bediuzzaman’s explanation of the topic is both seminal and original; let’s read: “… This Honourable Person’s true perfection and His whole character may not fit into some biographies of our Prophet and human conduct and conditions. For example: An Honourable one, with whom Jibril

and Mikhael (peace be upon them) were helping guards in the battle of Badr… This honourable person’s talking with an Arab Bedouin in the bazaar for bargain while purchasing a horse may not fit into the visible conduct by showing Hudayfa who is the only present person as a witness. So; in order not to do wrong, it is so necessary to look at His true perfection and His luminous spiritual figure, which is in prophethood degree, by turning your head from the ordinary attributes of Him arising from being in a human condition. Otherwise, one either would be disrespectful or fall in doubt. (Zulfiqar, Original Ottoman Scripture, Pg: 155)

In order to understand this lofty secret, considering the following example is required: “Imagine that there is a date seed and that date seed has been buried into the soil and become a bearer. And gradually it grows up. Or imagine that peacock has an egg and heat is given to the egg and it gives a chick. Then it becomes a complete, gilded peacock adorned all over it by the power of Allah (SWT) and it grows up and beautifies as the time passes.

Now, there are conditions and attributions belonging to that seed and egg. They consist of subtle materials. And that tree and bird breeding from the egg and seed has also sublime and major attributes and conditions relatively to the attributions and conditions to the seed and egg. Now, it is necessary to mention about the qualifications of that seed and egg by combining the qualifications of this tree and bird so that man’s brain can look at the tree by taking his head off the seed and can consider the bird by taking his eye off the egg in order for his mind to accept the qualifications he heard by his ear. Otherwise; he will fall into a lie and denial by saying: “I got a thousand batman of date from one dirham of the seed.” And “This egg is the Sultan of the birds in the heavens.”

Behold! The humanity of the Prophet (PBUH) is similar to that seed and egg. And His essential character luminescent with the prophethood is like an imperial bird of Paradise and like Tuba tree in Jannah. It is always being perfected. When one thinks of that Person (PBUH) in the market talking with a bedouin market, he must look at His (PBUH) luminous entity riding Rafraf, leaving Gabriel behind, running to the Qab-i Qawsayn. Otherwise he will either be disrespectful or his Nafsu’l ammara will not believe it. (Zulfiqar, Original Ottoman Scripture, Pg:156)
Consequently, it is necessary to bring up a ‘generation knowing their Prophet.’ To do this, we are obliged to learn and teach not only the life story of the Prophet but also rightness of His prophethood and His spiritual entity.