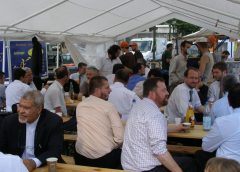 The old continent Europe shelters 450 million people and 27 countries inside it. One of its boundaries goes to the Scandinavian countries and another continues along the Ural Mountains.

The social values of Europe have been formed in a secular frame in accordance with Christianity and Judaism though there is a multicultural structure containing different religions and almost 35 million Muslims.

For this reason, a Muslim individual living in Europe has to pay more attention to some specialities due to the divine responsibility of leading people to the straight path. Consequently, the first speciality to pay attention to is to know the society. We live inside in all its cultural, economic and political aspects and need to bear in mind its priorities as a matter of fact that our Muslim ancestors taught us.

In the sociological perspective, surely it is not true to think that Europe met Muslims at the beginning of the 20th century. When we look at the history, it can be clearly seen that contact between them is actually very old. Seven centuries ago, there was an Islamic civilization neighbouring France which is today called Spain. That civilization was Al-Andulus. It was one of the best examples of living together in tolerance and peace. By the fact that pride comes before a fall, they collapsed owing to the decrease in following the Islamic principles of Islam in 1492.

That was the first acquaintance and experience of Europe about Islam but it is ended with an indescribable end. The second experience was seen in the Balkans through the coming Ottomans and continued along the beginning of 20th century.

After 1930, some crucial economic and social crisis arose in the middle of Europe. Those crisis triggered Nazism and World War II in Germany which is the neighbour of Spain. The results of the race based segregation and discrimination policy of Nazi Germany caused the deaths of 15 million people and massacre of 6 million Jews. In 1945, the view of the old continent we live in was not so acceptable. After the war, the consequence was poverty and suffering, millions of orphans, widows, and homeless people.

In the meantime, industrialization necessitates human resources, in that period Muslims, especially European Muslims have to pay more attention to that reality. Europe is in the third period of time with Muslims. That connection has been continued for half of a century and the Muslim population in Europe increasing year by year puts forth a social truth that there is a new society having different comprehension and belief throughout Europe.

What is that social truth?

a- Muslim population over 30 million forms almost 10% percent of general population of the Europe.

b- Migration to Europe from Islamic countries still continues.

d- There are conversions from other religions to Islam.

e- If we count the existence of Muslims in East European countries and Turkey negotiating to enter the European Union, we can say that, in 2040 the Muslim population in Europe will reach 35%. However we see that there are a lot of different perceptions and comprehensions about accepting that truth.

Shortly, these differences are:

2- Dimensions of Arabic and Islamic philosophy about leading Europe to the Renaissance.

3. The integration of Islam in Europe.

4. Islam as a politic factor.

9- European media and how they perceive and project Islam.

If we look at these problems with the eye of a Christian or Jew, it is possible to see that definition of Islam and Muslim doesn’t fit in any social formation. Muslims in Europe is argued as a problem, in other words Islam has been perceived as a black cat. For this reason; Muslims have got to exert more and more effort in this old continent in order to be a part of Europe.

It is an undeniable fact that Muslims paved the way for Europe’s improvements with scientific studies in Spain and translations of old Hellenic philosophical books before conveying them to Europe and educating thousands of Europeans in the al-Andulus State. On the contrary, unfortunately, Muslims started to be perceived in the patterns of September 11 and WTC terrorist attacks prepared by radical groups not representing Islam and Muslims in any way.

As a result of this misconception and new global conjuncture, the consequences below are seen:

– Islam is exposed to inequality in democratic processes.

– After the collapse of Communism, Islam has been the target and become a negative phenomenon in the eye of Europeans.

– Muslims are subjected to discrimination even in small parts of society, which indicates the prejudices fixed on Europeans’ minds.

–  Integration problem of Muslims is brought forward but there seem no positive proposals regarding Islamic priorities. For that integration, some prohibitive rules over Islam in constitutions of European countries have been ignored and there seems no study on this issue.

Unclear thoughts of political parties about Islam complicate the integration of Muslims.

Is the title of terrorist attributed to Muslims realistic?

Where will that Islamophobia wave, which has emerged recently in Europe, lead Europe?

Does Islam belong to the Middle East? When all religions are thought universal, why has the universal character of Islam not been accepted? Or are there boundaries for cultures and religions in globalization trend?

The Edict of Nantes was issued on 1598 by Henry IV of France to grant the Calvinist Protestants of France and Concordat of 1801 by Napoleon for religious liberty for bishops and later for Jews are the arrangements for religious freedom, is that not possible to make an arrangement for Muslims?

Actually all the questions mentioned above are derived from communication failure. Moreover, we shall mention the opinions of other religions about this issue. But a dialogue starting with characterizing Islam as a problem does not help constituting an ambiance that people express themselves, that is to say: for a mechanism working properly in favour of all society, in peace and freedom, efforts should be taken by paying attention to identify commonality between sides.

Also there are some recommendations to be followed by media, the most important one is not to see or present every single Muslim as a suicide bomber, instead of this, the media can help to form a multicultural environment where immoralities and corruption are excluded and moral values and goodness are accepted.

-Everyone should be open to change.

– Phenomenon are universal but at the same time they should be open to criticism.

– Comprehending the differences that everything has.

– Being aware of not making same mistakes again (Does history always repeat itself?)

– Thinking that decisions should not be made quickly with being biased.

– Comprehending that everything has a capacity to change.

– Everyone should be appreciated in same scales.

– Saving our culture from discrimination.

– And establishing an environment in which our priorities are human rights and social freedom.

Who is going to perform all these duties under such circumstances that getting worse whereas Muslims are financially weak?

As I said at the beginning, there is noone else but 10% of Muslim population to solve those. However, for sure the community is in need of being organized.

The Muslim community, which seems financially weak but has an unending faith, will cause an emergence of a new generation and civilisation by breaking down the prejudices by means of living Islam properly and representing it in this land, where we settled as a result of our traditional experiences and with the guide of our destiny .

In the mentioned studies related to organization, there are two ways to be followed in order to assure clarity of this sensitive matter. One of these ways is related to individuals and the other one is related to institutionalization.

Our aim for institutionalization is as follows:

1- Educational institutions
2- Our mosques and madrasas
3- Our universities
4- Our civil rights
5- Our relationship with other Muslim institutions
6- Our dialogue and relations with the believers of other religions and our partnership in mutual studies.

Since it is humans who will achieve institutionalization and our subject in this matter is Islam, the peculiarities of Muslim individuals have great importance in terms of this social structure.

In this perspective, Muslim communities must educate Muslims in order to achieve institutionalization.

1- Qualified religious education.
2- Studying the science of the Qur’an
3- Organizing weekend courses
4- Organizing helping courses for homework.
5- Attaching importance to foreign language that is the first condition of conveying the Divine message and providing circumstances with education in order to prepare staff that will be able to lecture in seminars in 3-5 years.
6- Making higher education possible for our children.
7- At the same time we have to learn the professions of the Information Age. If we cannot catch the Information Age, Islam will be only the religion of the lower class.
8- As Sayyidina Imam Ali (R.A) said: “Train your children not in accordance with your age but in accordance with the age they will live “In the light of this saying, we must bring up our generations in moral, science and action. As a result, God willing, they will become good Muslims and beneficial for all mankind.

One of the important services we can do for the society we live in is to teach Islam and practice it not to hide it and make Muslims as model citizens.

Europe and the West experienced every kind of prejudice and discrimination. They were in unjust times and atrocities. They suffered and subjected those by their own people, it wasn’t by outer powers. Ecclesiastic structure of Middle Age (related to the Church) caused these factors. When they found out about those obstacles against progress coming from the religious principles, they abolished them and their progress began. This progress was achieved by separating religion and government from each other in the Age of Enlightenment. Therefore, Europeans have been prejudiced against every religion. Actually it is far more different than Christianity that we know that Muslims used to contribute the best ever to science when they were following the religion of Islam. Whenever they leave the teachings of the Quran and become ignorant, they suffer and become weak.

Our duty is to change the Europeans’ opinion showing and proving that Islam is neither a danger nor an obstacle before progress. It is the source of progress and prosperity. History proves it.

I congratulate those brothers and sisters performing these services practicing Islam and telling others. May Allah give us sincerity in our deeds and make us sincere in our sacred duties. May Allah grant us to know the truth and the false, and give us the ability to differentiate them and obey His rules and leave the falsehood. Let me finish my words with a quotation from Imam Bediuzzaman:

“If you want pleasures of life, make your life alive with faith, make it adorned through prayers and make it preserved by avoiding sins.”