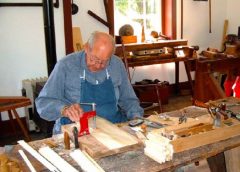 Working is an activity which can be seen in all creatures. What spurs it is the pleasure found within it. A philosophy of working within the boundaries of Islamic principles should be established among Muslims so that many problems may be prevented.

EVERYTHING DOES ITS WORK WITH GREAT CARE

In all religions, firstly, the problem of existence is solved and the basic assumptions are established. The concept of a Creator is proposed. If you do not have a concept of God and a paradigm of justice in your mind, the balance that you hold in your hand does not express much meaning.

Imam Bediuzzaman Said Nursi firstly solves the problem of existence to establish a philosophy of working in the minds of people. He forms a concept of a Creator and he locates the place of man in the universe. He draws the attention to the kind of universe that the man lives in and how his co-workers (which are the other beings) work. He stresses how the man lives in a realm which is full of activity, and he pushes the man to realize the main dynamics of the environment that he lives in.

According to Imam Nursi, life is man’s capital and the world is a market-place. Working is the order of Allah (SWT). All things belong to Allah (SWT). Thus, working should provide social peace and justice. It should not be to create a situation disrupting the social harmony which can be summarized through such rhetoric as; “Take pains for my comfort. You work so that I will consume.”

For Imam Nursi, man has been created and equipped for work and activity. Activity is fundamental in the universe and there is no place for inertia.  This is why it is often observed that lazy and inactive people become miserable and abject.

Man has been programmed for work based on his nature. He has been given the power to work. People are encouraged in the Qur’an in the following verse, “And that human has only that for which he labours” (Najm, 53:39)

The Prophet Muhammad (PBUH) expounds and supports this verse of the Qur’an as follows: “The labourer is the beloved one of Allah”.

Risale-i Nur first puts forward the proposal that there is a Creator methodically. This Creator has put the reward within the labour, as the manifestation of His name ‘Kareem (the Gracious)’. The reward is within the work. The pleasure is within the effort and the effort gives pleasure. There is pleasure in activity. Everybody takes pleasure from showing respect to the people who deserve it. Everybody feels the pleasure of helping people who are poor and in need of mercy and compassion. Everybody feels the pleasure of making a living through the work of his own hands.

There is pain and boredom in inertia, laziness and stability. For that reason, everything – from the bee, the fly and the chicken to the moon and the sun – does its work with an absolute enthusiasm and pleasure. And then Risale-i Nur concludes; “The earth and heaven and the beings within them carry out their duties in a perfect way because of the pleasure of work.”

Thus, everything, from the littlest being to the greatest one (except for lazy people and some wild animals) does its work with great care.

To Imam Nursi, some people do not know the pleasure and joy in activity and they have not discovered it yet. In order to get to that level first, a straightforward concept of the life of this world and of existence needs to be established in the minds of people.

The human mind cannot find excuses for laziness in a world in which everything and everybody works. Being aware of activity in which people find pleasure and joy, will  encouraged others to work. Instead of the difficulty of the work, the pleasure and joy within it should be stressed.

WHAT SHOULD THE MAN WORK FOR?

Working, first of all, is a need in man. Man should act in a balanced way in his working life, and he should establish the balance of the world and hereafter in a proper way. Imam Bediuzzaman says that the working life should not be intended only for worldly results. He draws the attention to the fact that the effort that man spends during his life should not only be restricted to transient worldly purposes, because such a thing is worthless, transient, and unfruitful, and it does not provide an ongoing benefit for the individual. It is like a corpse without the spirit. Furthermore, it discourages man from working, because after a while he will say, “That’s enough for me, now I will retire and rest”, and it leads the man into laziness in his later years. Now then, man should look further and think further too. He has to think about the hereafter, which is not transient. Living in comfort in the eternal life depends on the work in the world. In that way, if man thinks that his work will be fruitful and will yield eternal results, he will want to work till the last minutes of his life. That is, he will say, “I will send more light to my eternal life.”

Working should not be only for the meeting of worldly needs. It should be for the hereafter too. So the purpose in one’s working life should be determined according to that fact.

Imam Bediuzzaman explains another purpose in work as follows: “Work which is for the benefit of the society and which facilitates the life of the community is sacred. So man should not be selfish. The working life should serve humanity and it should facilitate life. The working life should serve the happiness of humanity. It should focus on the revealing human values. Nothing obstructs the path of a man who works with such a spirit. The other beings which are the co-workers of man serve life, and they produce for the needs of life and they work for all beings. Imam Nursi says that the Qur’an praises and encourages the art of the artists and discoveries of the explorers. He even claims that one of the reasons why miracles are told to people is to show them examples in the working life, and to encourage them to copy the examples. The Qur’an says to people through the language of these miracles, “O people, work and try to do what the prophets did with their miracles. They abandoned the desires of their soul, so you abandon your laziness and try to emulate them”.

THERE IS PLEASURE IN ACTIVITY

One of the reasons why people get lazy is that they do not experience the pleasure of working. They do not feel the joy in labour. People do not always choose the work suitable to their skills. Imam Nursi, who says doing work which is suitable to one’s skills gives people pleasure, adds; “If a potential skill turns into action, it widens and breaths and it gives pleasure and that is why there is pleasure in activity.” Thus, if the skills find a pathway, they will be developed and they will give pleasure and joy. Otherwise, people get bored because of activities that they do not like. They will do a job because it is a duty, not because they like it. Doing something just as an obligation affects the desire to continue with it. Man will always look for ways to leave it, and he will leave it in the first opportunity.

Those who say that they can’t get any pleasure from their work will indulge in laziness which is work’s worst enemy. They look for the pleasure in laziness which they can’t find in working. However, laziness is not a source of pleasure. Inertia does not give joy. Inertia and joy are nonexistence within existence. It is the death within the life. However, those who are idle and lazy, resting always in comfortable beds, suffer trouble many times more than those who work. The idle people always complain about their life and they want it to pass quickly through entertainment. Since laziness and inertia make life troublesome, they want it pass quickly. They spend their time engaging lazily in time-consuming games.

However, working people thank Allah and praise Him and they do not want their life to pass quickly, because activity is the spirit in the body. It is the power of the body. Imam Nursi makes such an analogy regarding this fact: “Ask a poor working man, ‘How are you?’ He will say ‘Thanks be to Allah, I am fine and working. I wish the sun had not gone down and I could finish my job. The time passes quickly and the life is short. Though I toil away, this also will pass. Everything passes quickly”, and in that way he will tell you how time is valuable. Thus, by working he understands the pleasure and value of life.

WORKING IS NOT AN EXCUSE FOR LEAVING PRAYERS

People have to work to meet their needs. We are creatures who need to be nourished and we need food. The fact that our needs are continuous makes our working perpetual. For that reason, man can see the work for sustaining life as an excuse for not performing prayers. However, Allah (SWT) says in many places in the Quran (in summary) “You are created for servitude. The result of your existence is servitude. Working for a living is a kind of worship in terms of divine orders. It is My work to provide the livelihood of My creatures, of you, and your family. I created the jinns and people so that they worship me.”

We are deprived of the power of providing the livelihood for ourselves, for people that we are responsible for, and for animals, because we need forty things in order to get a loaf of bread. We have power neither to control the seasons by rotating the sun, nor to change the daily regime of the world by turning it. Briefly, we canot think that we nourish anybody unless we control the earth and the heaven. In truth, we are provided with our livelihood. Our work is simply based on bringing some factors together so that the livelihood reaches us.

The situation of the man who gives up the prayers for earning livelihood is similar to a soldier. The duty of a soldier is going on exercises and fighting and providing security. Yet, if an inexperienced private pursues his livelihood and wanders around the market-place, he will get a punishment, since he accuses the state and army through the tongue of his disposition, implying that the state is poor because it cannot take care of his needs. So, the man is like the soldier in the worldly life. His main duty is servitude to Allah (SWT). After carrying out this duty he needs to work. So, working for his livelihood cannot be an excuse for giving up worship.

A man should work in order to be a mature man and a true believer, instead of being a shallow, insincere and ostensible Muslim.

SOME PRINCIPLES FROM BEDIUZZAMAN SAID NURSI