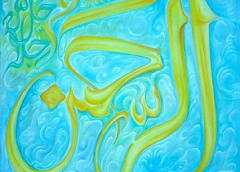 EXPLANA TIONS ON ITS MEANING

According to Ibn Abbas (RA), “Rahman” comes from the root ‘rahmah.’ “Rahmanurrahim” have rahmah (compassion) on His beloveds by treating with softness, love and gentleness. He becahaves towards the one He got angry with a lack of rahmah.

According to a narration in some tafseers like Taberi, Prophet Isa (AS) said, “Rahman means very compassionate in the World and Hereafter; Rahim means compassionate only in Hereafter.” (Ibn Kesir

The Name ‘Rahman’is mentioned in the Qur’an 159 times including the ones in Bismillah at the beginnings of Surahs (chapters).

As mentioned above, Bediuzzaman expresses in Isharat-ul Ijaz that the Name ‘Rahman’ means ‘Rezzaq’ and indicates great bounties.

The Name ‘Rahman’ is unique to Allah (SWT), and nobody else is named with that.

At this point the late Elmalılı Hamdi Yazır says as follows: “Rahman is also a unique Name of Allah (SWT), but it is not a name of person. The Name ‘Rahman’ is a name of attribute which is unique to Allah (SWT).”

We see that some translated this Name as “begrudging.” In fact, ‘begrudging’ means ‘being jealous.’ It is said, “You kept it back from me,” meaning begrudging. Moreover, it is for sure that something begrudged is protected; so ‘begrudging’ might be used in the meaning of ‘protecting.’

Marhama (mercy) is a feeling that eliminates suffer and calamities; and gives happiness and goodness instead.

Rahmah is to save someone from any kind of disaster, and provide for the needy. It also means compassion, mercy, softheartedness, forgiveness, pity, and benevolence. (Razi)

At this point Bediuzzaman says as follows: “What makes this boundless universe rejoice is clearly Divine Mercy. And what illuminates these dark beings is self-evidently Divine Mercy.

And what fosters and raises creatures struggling within these endless needs is self-evidently again Divine Mercy. And what causes the whole universe to be turned towards man, like a tree together with all its parts is turned towards its fruit, and causes it to look to him and run to his assistance is clearly Divine Mercy.

VALUE OF THE NAME RAHMAN

“Look only at the Name of All- Merciful: Paradise is a manifestation of it, eternal happiness, a flash of it, and all the sustenance and bounty in the world, a mere drop of it.” (The Words)

Rahman is so precious that a Surah in the Qur’an is named after it. And it is mentioned with the Name Allah and Rahim in the ‘Bismillah.’ And ‘Bismillah’ is written at the beginning of the Surahs in the Qur’an and all the other mubaraq books. Moreover, Imam-i Shafi expresses that although ‘Bismillah is just one verse, it was revealed 114 times in the Qur’an.

Man was created to totaly show the Name Rahman on himself. That is, man is a mirror which reflects Rahman and becomes evidence to it.

As narrated in the Hadith the names Abdullah (the abd of Allah) and Abdurrahman (the abd of Rahman) are the ones Allah (SWT) loves most; because the Name ‘Allah’ is his greatest Name and ‘Rahman’ is the second.

As a matter of fact, it is mentioned in the verse as follows: “Call upon Allah or call upon the Most Merciful. Whichever [Name] you call – to Him belong the best Names.” (Isra, 110) We understand that rahmah and marhama are very important for people. Just as man needs the rahmah and marhama of Allah (SWT) in every moment, so man must take refuge in Rahmanurrahim Who is the Most Compassionate, the Most Merciful.

Allah (SWT) is compassionate. He loves the merciful. For this reason, people must behave mercifully and with compassion towards each other, and towards the other living beings as well. So they can be a better mirror to Rahmanurrahim.

My Lord! Make us your servants who know their weakness and poverty and supplicate to you; and who treat others with compassion and be a mirror to your blessed Name ‘Rahman.’ Amen.