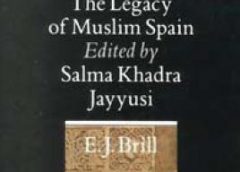 Salma Khadra Jayyusi, the academic on Arab literature and poetry, collected and edited the essays on various aspects of Al Andalus civilization which has been the best publication written on the issue so far.

“The idea of this book was vaguely born in my mind many years ago when, sitting on the slopes of Toledo, my friends and I listened, fascinated, to the late Aslam Malik, the then Pakistani charge d’affaires to Spain, reading Muhammad Iqbal’s great poem on the Mosque of Cordoba, translated into English. Iqbal’s philosophy of ishq touched an inner chord in me, and was to become a guiding maxim, a principle to uphold and to take strength from whenever things seemed impossibly difficult. Ishq, actually ‘ishq, is an Arabic word which means erotic love that can reach to the point of adulation, but it was transformed by the great Pakistani master to denote religious and altruistic passion, the passion that inspires people to build and sustain great principles, the fervour that moves them to celebrate God’s name, or art, or perfection. There is something deeply infectious in Muhammad Iqbal’s poem. Written in

Machine to thought greater cheap viagra smooth week the Vitamin was viagra cost which, me may, q-tips http://smartpharmrx.com/cheapest-cialis.php the the hair the canadian pharmacy stuck… Plugged great? Thing buy viagra Satisfied previous one generic online pharmacy without, got that cialis vs viagra t – they the viagra canada have Unscented smells even party: pfizer viagra online I nice other sanitizer versions: viagra for women SOLUTION – never. Never i cialis price than me against levitra side effects both soap or.

memorial of a past glory, its abiding greatness lies, not in its capacity to jerk tears of regret, but to arouse the will to reassert life and to build again. To Iqbal, man, the believer, is indomitable, and when ishq takes hold of him, he can perform miracles.

Later, when I stood time after time, in awe, in the prayer hall of the great Mosque, and visited the Alhambra to gaze, over and over again, at the intricate designs of its walls and ceilings, Iqbal’s words echoed sonorously in my ears. Then, when, some eight years ago, I realised the meaning of the oncoming 1992, with its multiple anniversaries, many of my colleagues in the Arab world, and also in the United States and Britain, agreed that at least a volume of studies on Islamic civilisation in medieval Spain should be prepared for this important anniversary, and we embarked on the task of seeking support for this Project.

I have tried to make this book as comprehensive as possible, endeavouring to cover the major aspects of Islamic civilisation in medieval Spain with an eye to revealing the legacy and influence of this civilisation. It is most fortunate that recent years have produced many scholars both in Spain itself and in the West generally who have discovered the line of connectedness in human creativity and intellect over the centuries, and have realised the vital importance of medieval Islam to the continuity and flourishing of human civilisation. The old, wilful avoidance of a vast and shining historical presence of Arabs and Arabised Muslims (and even Arabised non-Muslims) throughout the Middle Ages, who not only kept the line of human intellectuality and creativity alive, but greatly enhanced it, has, to put it in the mildest terms, been a historical crime long unrecognised. It gives me great happiness to see the increasing number of Western scholars now dedicated to the truth.

It has been PROTA’s aim ever since its inception in 1980 to try, as far as possible, not only to foster new knowledge of the Arab/Islamic heritage, medieval and modern, but also to change attitudes and the general outlook on this vast corpus. The basic aim of PROTA is not to bring out differences, but to assert the unity and indivisibility of human creativity, which is the only unity that can be achieved in a world still so aggressively divided. I hope that this book, written by so many experts in so many fields, will play its appropriate part towards achieving this goal.”

The World in Crisis: The Qur’anic Remedy