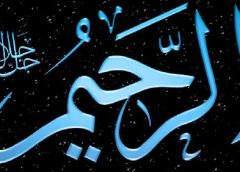 Rahim is a special name of Allah’s SWT. In terms of vocabulary it derives from “rahm” and “rahmah” and expresses the continuity of them. It means “most merciful.” (Elmalılı)

Ibn Abbas says, “Rahman and Rahim have similar meanings. One of them means ‘having more rahmah (compassion)’ than the other.” (Ibn Kesir)

The word ‘Allah’ indicates sovereignty, might and highness. Allah SWT mentions the Names Rahman and Rahim right after the Name Allah, which means His rahmah is above and more excellent than His wrath. (al Razi, Tafsir al-Kabir)

It is stated that “Allah SWT shows mercy to people at six points: at the grave and the gathering after leaving it; on Doomsday and the darkness of it; in the trial and its sessions; when the books of deeds are read and the fear of that; on the Sirat (bridge) and its horror, andabout the hell and its layers. (al Razi, Tafsir al-Kabir)

How many times is it mentioned in the Qur’an?

Including the ones in Bismillah, the word ‘Rahim’ is mentioned 220 times in the Qur’an. (Letters)

About the sifat Rahim, Allah SWT uses this sifat for others as well as Himself. “There has certainly come to you a Messenger from among yourselves. Grievous to him is what you suffer; [he is] concerned over you and to the believers is rauf (kind) and rahim (merciful).” (Surat al-Tawbah, 128) (Ibn Kesir)

The Wisdom of its Coming after the Name Rahman

‘Rahman’ is unique to Allah SWT. ‘Rahim,’ on the other hand, is given to Him and other beings as well. Therefore, the meaning that ‘Rahman’ expresses is greater.

As the story goes, a man went to a great man, and said, “I came to you for a small matter.” Upon this the great man answered, “Go to a small man for the small matters.”

According to this, Allah SWT means to say, “If I had mentioned only the Name Rahman, you would be ashamed of yourself and could not request simple things from Me. However, since you know that I am Rahman, you can ask great things from Me; but I am Rahim as well, therefore, you can ask for even your shoe string and the salt of your meal from Me.” As a matter of fact, Allah SWT said to the Prophet Musa (puh): “O Moses! Ask from me even the salt of your meal and the feed for your sheep.” (Razi, Tafsir al-Kabir)

It is narrated that Prophet (ASM) said, “O Allah, settle my ummah’s account before me.” Later, Prophet (ASM) abstained from performing Salat al-Janazah (the funeral prayer) of someone who had died two dirhams in debt, and having cast aspersions on Aisha (RA) and caused her to leave the Prophet’s home.
“A woman was put in Hell because of a cat which she had kept locked up and not set free to eat the insects of the earth.” (Bukhari, Muslim)

“While a man was walking on his way, he became extremely thirsty. He found a well and went down into it to drink some water. Upon leaving it, he saw a dog which was panting out of thirst. His tongue was lolling out and he was eating moist earth from extreme thirst. The man thought to himself: `This dog is extremely thirsty as I was.’ So he descended into the well, filled up his leather sock with water, and holding it in his teeth, climbed up and with it quenched the thirst of the dog. Allah appreciated his action and forgave his sins.”

The Companions asked: “Shall we be rewarded for showing kindness to the animals also?” He (PBUH) said, “A reward is given in connection with every living creature.” (Muslim)

Like love, compassion is a way which is indeed much sharper and broader going to the Name Rahim. (The Words)

Yes, in all its varieties, compassion is subtle and pure. Furthermore, compassion is extremely broad. Through the compassion he feels for his own child, a person’s compassion encompasses all young children and even all living beings, and acts as a sort of mirror to the comprehensiveness of the Name of All-Compassionate. Moreover, compassion is sincere, it does not want anything in return; it is pure and seeks nothing in exchange. The self-sacrificing unselfish compassion of animals for their young, at the most common degree even, is evidence of this. (The Letters)

“Have mercy on those who are on earth, and the One in the heavens will have mercy on you.” (Tirmidhi)

“The one who is farthest from Allah SWT is he who has a hard heart.” (Tirmidhi)

Therefore, we must be merciful and compassionate towards people and other living beings so that we follow our Prophet PBUH and be a beautiful mirror to the Name Rahim.  Then we will obtain Allah’s mercy and compassion.