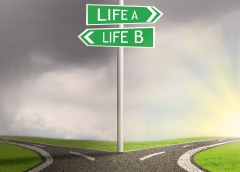 All existents are affectionate servants, companionable employees, and kind books from the perspective of the believer. Many more delightful, lofty, delectable and sweet truths manifest and become apparent through the faith.

“The Second Word” from the Risale-i Nur Corpus

In the name of Allah, the Merciful, the Compassionate.

Those who believe in the unseen…1

If you wish to understand how much happiness, and how many great blessings there are in faith,2 and the immense joy and tranquillity that are contained therein, then direct your attention to this short allegory. Listen!

[The allegory of the self-seeking and God-seeking men]

One day, two men set off on their travels, with the intention of both leisure and trade. One of them was a deeply self-seeking, unfortunate person – and he set off in some direction or other. The other was a man God-seeking and fortunate – and he went in another direction.

Since the self-seeking man was self-serving, self-absorbed, and a pessimist, he entered, as a punishment for his pessimism, a region of exceeding iniquity – in his perception, that is. Everywhere that he looked, he saw helpless, miserable men, crying out in lamentation at the brutality of oppressive tyrants, howling in misery at the terrible exploitation of those men. In every place that he wandered, he would see the same disheartening, distressing circumstances. It was as if the whole town was a place of public mourning! He could find no other way to avoid feeling the sensation of this dark, painful state, except by getting drunk; for everyone appeared to him alien and adversarial, and he saw terrifying, forsaken corpses and orphans weeping tears of despair – and his conscience was thus in a state of torture.

The truth-seeking, God-worshipping man, on the other hand, was truly objective, and an embodiment of beautiful character. He came thereby into a region that was of the utmost beauty – in his perception, that is. All over this region that he had entered, this good man saw a public festival. In every neighbourhood, pervading cheerfulness, festivals, and ecstatic gathering places for the remembrance of Allah were made perceptible to him. Everyone in the town appeared to him to be a friend or relative! All over the region he saw celebrations of a general discharge from service from which emanated admiring applause and exclamations of joy. He could hear the sounds of drums and music, accompanied by cries of Allahu akbar,3‘Allah is Greater’ and la ilaha illallah,4  ‘there is none worthy of worship but Allah,’ proceeding from a celebration for the enlistment of soldiers taking place in an atmosphere of the utmost amusement and delight.

While the first, unfortunate man was experiencing his own pain, and the pain of people in general, the second and fortunate one found himself pleased and relieved both in his own state, and in the happiness of people in general. He had already acquired a profitable business and was thus giving thanks to Allah.

[The joyous man encounters the pessimist]

Some time later he returned and ran into the other man. He perceived his condition, telling him, ‘Oh you! You have become deranged! It seems to be that the ugliness in your inner reality has become reflected into your outward being, inasmuch as you have been deluded into thinking that laughter is weeping, and that being set free is robbery and plunder! Come back to your senses and purify your heart, so that this devastating veil becomes lifted from over your eyes, and you are able to see the reality!

For it is impossible that a country such as this should be as you have imagined it, manifesting as it does so many clear signs of advancement and perfection, with a king perfectly capable, just, merciful, and compassionate, and who cares so conscientiously for his subjects, and for order therein!’ The unfortunate man returned to his senses, saying ruefully, ‘I have become a fool, through becoming dependent on drinking! May Allah be pleased with you, for you really have saved me now from this hellish situation.’

The meaning of the allegory

Oh my own lower self! Know that the first man represents a disbeliever,5 or someone heedless and immoral.  In the perspective of such a man, this world is a place of universal mourning, and all living creatures are orphans, weeping at the blows of separation and death. Human beings and animals are creatures forlorn and out of control, torn apart by the claws of impending death.

The immense beings, the mountains and the seas, are soulless, terrifying corpses. There is no end to the devastating, crushing and terrifying delusions such a man has; all stemming from his disbelief and misguidance,6 they torment him spiritually. The other man is a believer. He recognises the Creator and gives credence to Him. This world is, in his perspective, a place for remembrance of the Merciful. For both humans and animals, it is the sphere of learning and of training. It is the arena in which men and jinn7 are tested. All deaths, of animals and human beings, are discharges from duty. Those who complete their life-duties move on, in a state of spiritual joy, from this impermanent residence into an untroubled world, so that new officials can take their places and begin their employment.

The birth of all humans and animals constitutes their enlistment in the army, their reception of their weapons, and their commencing their new tasks. Each living being is a glad soldier, on active duty, an upright and contented official. All voices are a glorification8 and remembrance of Allah at the commencement of duties, or cries of gratitude and joy at their end, or melodious songs springing from the pleasure of work.

[Faith causes the true, joyous nature of beings, as well as hidden truths, to become manifest for the believer]

From the perspective of the believer, all existents are affectionate servants, companionable employees, and kind books belonging to their Generous9 Master and Compassionate Owner. Many more delightful, lofty, delectable and sweet truths manifest and become apparent through the faith of such a person. That is, faith carries the seed of the spiritual Ṭuba Tree10 of heaven – and disbelief carries the seed of the Zaqqūm Tree11 in Hell.

Safety – then – and security, are to be found nowhere else but in Islam,12 and in faith. This being the case, it is our duty to continually say:

Let Allah be praised, for the religion of Islam and for perfect faith

2) إيمان (īmān) Faith – the heart’s assent to the truth of the revelation Allah sent down to our master Muhammad, upon whom be blessings and peace.

3) تكبير (takbīr) The invocation of Allahu akbar ‘Allah is Greater’.

4) تهليل (tahlīl) The invocation of la ilaha illallah ‘there is none worthy of worship but Allah’. See note 43.

5) كافر (kāfir) Disbeliever – a human being who has rejected the Divine commands brought by the messengers and therefore ‘covered over’ (كَفَرَ kafara) the truth.

6) ضلالة (ḍalālah) Misguidance – The state of being opposed to the Divine truth revealed in Islam.

7) جن (Jinn) Beings mentioned in the Qur’an, who have free will and were created from smokeless fire. They exist in their own communities hidden from human vision, although they are able to see us. The Prophet, blessings and peace be upon him, also brought his message to them, and they will accordingly be judged as beings endowed with free will, and sent to dwell in either Paradise or Hell.

9) الكريم (al-karim) The Generous – a name of Allah – the One who is faithful to His promise, gives even beyond that which is hoped for, and who enriches His creation such that they have no need of asking of anyone other than Him.

[1]0) طوبى (ṭuba) The Tuba Tree is a tree growing in Paradise believed to have its roots in the heavens – according to a hadith, it is so large that a rider could journey in its shade for a hundred years without leaving it. See Sahih al-Bukhari 4/474

1[1]) زقّوم (zaqqūm) The zaqqūm tree is an accursed tree in Hell, the harmful fruit of which the damned will be compelled to eat. See Qur’an al-Dukhan 44/43-46

[1]2) إسلام (Islām) – Linguistically, it denotes submission and therefore entering into a state of peace and security. As denoting a human being’s submission to the will of Allah, it is the primordial religion of mankind that constituted the fundamental message of all of the prophets, peace be upon them. Our Master Muhammad, blessings and peace be upon him, came with the final manifestation of Islam, which was free of all of the heretical distortions that had corrupted previous manifestations. Imam Nursi defines Islam in the Ninth Letter as, ‘supporting the truth and submitting to it,’ whereas he defines iman as, ‘assenting [to its truth].

One thought on “A joyous journey of life with faith”

The most powerful case

Sincerity: the most important basis, the greatest strength