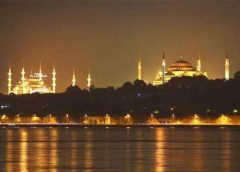 This Ramadan brought many differences to Turkey. Although many express that they miss the old Ramadans, for the last few years Ramadan has been better in Turkey. Especially this one has undergone significant changes. The rich gave up hosting expensive iftar dinners. Media- including the secular ones- increased broadcasting on religious issues thanks to Ramadan. The drought in Africa increased awareness that many people and organizations, including government, media, institutions and more, joined the aid campaigns for Somalia.

Ramadan is the month of thankfulness. It would be very wasteful to have luxurious iftar dinners while there are millions of poor and hungry people all around the world. Moreover, the drought in Africa did not let anyone to spend huge amounts of money for iftar dinners. Decent dinners would be enough for iftar gatherings. Expensive spending was cut one by one. Some even cancelled iftar dinners and gave the money to the aid campaign for Somalia. This brought public appreciation.

It is also worth seeing the change in the Turkish media. TV channels, newspapers, magazines and web sites welcomed Ramadan with their special coverage. Sahur and iftar were the times for special programmes of TV channels. Imams and scholars were invited for those programmes even by the secular channels, which was rare in the past. They have got the opportunity to talk on various religious issues and enlightened the public.

Somalia played a different role in this Ramadan. It awakened the spirit of benevolence all around Turkey. Government, NGOs, TV channels, papers, business associations, foundations, and people from all walks of life organized aid campaigns. The Turkish PM himself –with a huge group of ministers, diplomats, journalists, and volunteers- went to Somalia to draw the World’s attention to the famine in Africa.

Altogether, this Ramadan was a better one. People in Turkey have fasted with the peace of mind, heart and spirit, despite some unwanted hardships in and out.

This Ramadan gives us the hope that future days will be different and better than today for Turkey and for the entire World.