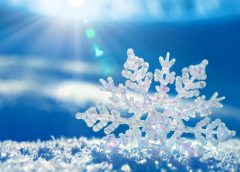 Absolute nonexistence of something cannot be proved and cannot be witnessed; unless its existence is limited to some place and time. In other words, if I say there is not a “thing” in this room; it may be true and also I can prove it by ‘showing’ every place within the room to others or checking everywhere in the room and witnessing to others. However, it is so difficult to witness the absence of a “thing” in the world, because in that case I have to travel all around the world, inside of its lands, grounds, seas and oceans. Shortly, it is almost impossible to be truly a witness to nonexistence of a “thing”. Moreover, if I say it never existed, I have to travel all the times from pre-eternity to post-eternity. Therefore, there is a common principle saying “absolute nonexistence cannot be proved”. On the other hand, as it was stated, existence of something can be witnessed, and therefore proved, by only two witnesses.

Thinking logically, it is very sensible that if two or more people say a common thing to us, then we consider it as a fact, because we know that naturally humans prefer to say truth. If they do not have a strong reason to lie, which is forbidden in Islam totally, then they always prefer to say the truth. Moreover, if we know that the witnesses are more trustable than a common person, if they have not lie throughout their lives and if they have better moralities than other ordinary people in many aspects, we totally trust them and regard their words as true, real facts. This is a witnessing of other people to us.

Combining the facts above, we know that the prophet of Islam, Muhammad (pbuh), had never told a lie in his life; both before the prophethood and after it. He says I saw the Jannah and the Hell and also Allah (swt). His witnessing must be enough for us, since he never told a lie even in his younger ages. (Even his enemies are witnesses to this.) Not only him, but also his companions witnessed Islam’s facts, existence of them. There were more than 100 000 companions. They hated lying. Therefore, their witnessing is, indeed, strong enough to prove to us the existence of the hereafter. They all say, “Oh people! Be prepared for the hereafter. After your death, only your good deeds will help you in your travel throughout a long way. If you have bad deeds, they will make you totally regretful. We are witnesses to Allah (swt), his prophet (pbuh) and the pillars of belief.” Logically, even two people’s witnessing is enough to prove existence of something. Here, we have more than 100 000 witnesses, all saying the same thing.

There are more people who saw places of the hereafter, the Jannah and the Hell. During 1400 years, there came more than 100 million awliyaa. They all say the same thing. They all witness the existence of the hereafter and the last judgement day. Some of them really and literally saw the Jannah and Hell. For instance, Abdulkadir Jilani saw them many times. Moreover, he also showed them to some people. Once, a poor non-Muslim asked to him, saying “Oh, Abdulkadir! Your prophet says ‘this world is the Jahannam of a Muslim and the Jannah of a non-Muslim.’ How can this be true? Look at me, I am miserable and very poor here, but you are living in a comfortable life (Abdulkadir Jilani was a rich man)”. As an answer, Abdulkadir said him “Come near me, look at the hole at the end of my caftan in my right arm.” The non-Muslim looked at the hole in his right arm end of the caftan. He was shocked. He saw the Jannah. Abdulkadir said then, “Now, look at the left arm” He looked and shocked. He saw the Jahannam. Abdulkadir said Muslims will go to Jannah after they die, so this world is their Jahannam comparing to Jannah and vice versa for non-Muslims. Right after this event, the non-Muslim found the truth and became Muslim. As in this example, some of awliyaa, they not only saw, but also showed to some people the Jannaj and the Jahannam. All of them are witnesses to existence of Allah, the Jannah, the Jahannam and the last judgement.

We have many different evidences from the Qur’an, the prophet and the universe. However, even if we wouldn’t have any evidence, only the witnessing of those people who are awliyaa and companions of the prophet would be enough for us. They are witnesses to the existence of the hereafter. Many of them say we saw it, and others say we are also witnesses to it. Normally only two people enough to prove the existence of something. Here, we have millions of people. All of them have good moralities, they hate lying, and they are like stars (guiding people) of their environment. So, there have to be no doubt about their sayings.

Coming to the disbeliever’s denial, their witnessing is similar to the people who did not see the new moon in the last night before Ramadan. They cannot prove nonexistence of the Hereafter. They have to travel or at least see all parts of the universe, and moreover they have to make a time travel to the far future to prove that; because the hereafter is a place that will be created in the future. Therefore, the witnessing of all disbelievers is not meaningful for us. Their number is not important. Even they are billions of people or even more, it does not prove anything. They are right saying “We did not see the hereafter.” However, they are wrong at “So, there is no hereafter.” It cannot be a proof for nonexistence of hereafter just because they did not see hereafter.

Therefore, as a result, witnessing of many awliyaa and companions is a very strong proof to us for the existence of the hereafter. They say “Oh people! Be prepared! Be prepared for the last big judgment so that you are saved from the Jahannam, so that you are taken to the Jannah and so that you see Allah (swt), the Divine beauty, and live happily in Jannah forever.”

One thought on “Witnessing the Existence”