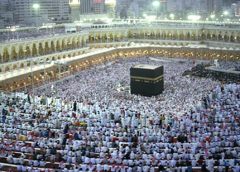 As an Islamic term hajj means the worship done in the Dhul-Hijjah (month) of pilgrimage which is one of the lunar months by accomplishing some religious duties in accordance with their conditions and methods properly in Qa’ba, Arafat, Muzdalifa and Mina. Also Hajj Rituals are called “Manasiku’l Hajj”.

And those who visit those holy places in certain times are called “Hajji”.

Hajj is the fifth pillar of Islam which must be accomplished at least once in a lifetime.

It is obligatory for each Muslim, regardless of male or female, nation, colour, language, country and culture, provided that he/she is financially and physically able to do.

lifetime Prequisites for performing the Hajj are to be a Muslim, to be of sound mind, to be an adult or mature enough, to be free, and to have the ability to afford the journey and maintain one’s dependents back home for the duration. The reward for the Hajj is nothing less than Paradise.

And our Prophet regarded Hajj (pilgrimage) as one of the five pillars of Islam and showed Muslims how to do it by applying it himself.
“And proclaim the Hajj (pilgrimage) for mankind! Let them come to you either on foot or on tired camels which come from distant highways.” (Hajj: 27)

The Importance of Virtue of the First Ten Days of Dhulhijja

What is the importance of fasting in the first 10 days of the month Dhul Hijjah?