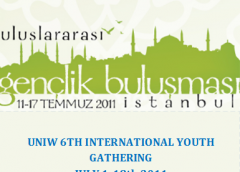 The 6th International Youth Gathering starts tonight at 18:30 in Istanbul. There will be a-three-day forum within the programme. The Union of Non-Governmental Organizations of the Islamic World (UNIW) has determined the topic of the forum as “Human Rights in the Islamic World”.

Today, the idea and term of Human Rights is at the center of many debates. Even though the concept has very historical root as much as the history of Islam in the Islamic Civilization,  today it is important to consider the perception of human rights alleged to be Eurocentric value and contribution ratio of the Islamic World at the development process of the concept.

The most important problems to be solved in the Islamic World are the differences in the practices of human rights or fundamental rights and freedoms which are accepted to be the sources of Islam and Islamic Jurisprudence.

Today, the Muslim world has fallen at the state of consumers of the concept of human rights where media and international organizations try to deem and demonstrate that its human rights record is low. Of course, some of these publications reflect the realities. De facto situation within the idea of ​​human rights in the Islamic world which is not coinciding with its beliefs and theoretical guidelines confirms this. However, a part of this publication or beliefs considers the principles of Islam deliberately at the same context based on the current state of the Islamic world. Nevertheless, in this way it is aimed to support increasing anti-Islamic, Islamophobic policies and publications with intensity and different types.

Implementation and practicing of Islamic Principles is quite significant, likewise it is also important to prevent allegations of some groups of Western or Islamic origins with Orientalist point of view who insistently claim that Islamic World is far from the concept and idea of human rights in theory and practice.

In fact, ensuring human rights is a universal challenge. Thus, human rights violation and abuses happening all over the world are not related to Muslim World both in theology and in reality. We need to stress that human rights violation has no cultural reference but it is based on an authoritarian understanding of this or that party. The Holy Qur’an mentions the conditions that lead to authoritarianism in the case of Pharaoh: “Truly Pharaoh elated himself in the land and broke up its people into sections, depressing a small group among them: their sons he slew, but he kept alive their females: for he was indeed a maker of mischief” (Qasas, 4)

The compatibility of human rights and Islam is a topic of a heated debate, both in Islamic and international circles. Thus, Maqasid (The purpose of Islamic law) can be developed as a project for human rights in terms of Islamic law. Contemporary jurists/scholars developed traditional Maqasid terminology in today’s language, despite some jurists’ rejection of the idea of “contemporarisation” of Maqasid terminology. Traditionally, the “preservation of offspring” is one of the necessities that Islamic law aimed to achieve. However, in the twentieth century, writers on Maqasid, significantly, developed “preservation of offspring” into a family-orientated theory. Ibn Ashur, for example, made “care for family” to be a maqasid of the Islamic law, in its own right. Similarly, the “preservation of mind”, which until recently was restricted to the purpose of the prohibition of intoxicants in Islam, is currently evolving to include “propagation of scientific thinking”, “travelling to seek knowledge”, “suppressing the herd mentality”, and “avoiding brain drain”. Likewise, the “preservation of honor” and the “preservation of the soul” were at the level of necessities in al-Ghazali’s and al-Shatibi’s terms. Recently, however, this expression is gradually being replaced in the Islamic law literature with “preservation of human dignity” and even the “protection of human rights” as a purpose of the Islamic law in its own right. On the other hand, some members of the United Nations High Commission for Human Rights (UNHCHR) expressed concerns over the Islamic Declaration of Human Rights because they believe that the declaration “adds new positive dimensions to human rights, since. Unlike international instruments, it attributes them to a divine source thereby adding a new moral motivation for complying with them. A Maqasid-based approach to the issue of human rights supports this opinion, while addressing the concerns of the former, especially if al-Maqasid terminology is to be “contemporized” and made to play a more “fundamental” role in juridical reasoning. The topic of human rights and Maqasid requires further research in order to resolve the “inconsistencies” that some researchers have suggested in terms of the application level.

In this regard, the Union of Non-Governmental Organizations of the Islamic World (UNIW) has determined the topic of forum as “Human Rights in the Islamic World” within Sixth International Youth Gathering between 11th and 18th of July, 2011 in Istanbul.

At the forum, young representatives of civil society in the Islamic world will make presentations on the topic and to take seminars from experts and academicians on the concept of human rights, contribution of the Islamic world on it and relevant practices. The topic will be discussed with all aspects at three-day forum within the youth gathering.

It would be honor for UNIW to accept nominees of its member organizations as speaker in the forum and participant in IYG which will bring together many young leaders, academicians and NGO representatives of the Islamic World.

Main Topics to be discussed at the Forum of “Human Rights in the Islamic World”:

3- Human Rights, Politics and International Strategies: The Case of Reports

4- Human Rights Organizations and the Problems They Face

5- Problems and Solutions of the Muslims Living in the West

7- Quest for Solutions in the Islamic World

The Sixth International Youth Gathering will last for a week between 11th and 18th of July, 2011 in Istanbul.