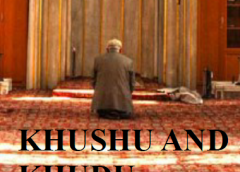 Khushu (Humility) means veneration and involves submission and bowing down through expressing one’s reverence. According to one’s view, it has an identical meaning with that of khudhu (veneration). According

to another view, khudhu (veneration) refers to showing humbleness with your body, namely with your limbs, while khushu particularly means showing one’s humility and submission through voice and eyes. Khudhu is also used to express tranquillity and abasement. It is stated in Sura al-Taha, verse 108: “All sounds shall humble themselves in the Presence of (Allah) Most Gracious.” (Kamus al-Muhit Translation, Ottoman Scripture, v. 2, p. 566)

1. To be captivated by the thing one is facing so much that he/she will go unaware of his/her existence.

3. A servant’s regarding his/her self low and servile, and submitting to Almighty Allah with his/her heart full of tremble and fear before Allah’s magnificence: When Junaid Al-Baghdadi was asked about khushu, he replied as follows: “It is the heart’s state of being in abasement before the

2. To bow down before Allah’s magnificence. It is generally used together with khushu (Kubbealtı

In the annotation of Tafsir al-Jalalayn, khushu is defined as the tranquillity of the heart and the calmness of the organs.

The 2nd verse of Surah al-Mu’minun was translated as “They are those (the mu’minun – believers) who humble themselves in their prayers.” In the Tafsir al-Jalalayn, the word (khashi’un) in this verse was referred to as “Those who humble themselves”. In its annotation, it says “To have adab (propriety) comes from khushu. Thus, one abstains from pulling clothes, turning face to right or left, yawning, closing eyes and mouth, interlacing fingers and moving the pebble stones on the floor.”

The 45th verse of Surah al-Baqarah was translated as follows:

There are the following explanations in the tasfir of Qurtubi regarding khushu:

Khashi (the person obtaining khushu) means humble. Khushu is a state in the self, due to which a state of tranquillity and humbleness appears in organs. Qatada says, “Khushu is in the heart, which means fearing and abstaining one’s eyes (from looking around).”Zujjaj says, “Khashi is the person on whom signs of abasement and humility are seen.”

– O Sarvi! Although you want to be an imam for people, don’t you know khushu? I asked Ibrahim Nahai about khushu. He said:

– O Uaymish! Although you want to be an imam for people, don’t you know khushu? Khushu is not eating hard staff, wearing hard clothes or bending one’s head down. Rather, khushu means considering the noble and the lowly as equal in regard to rights and submitting to whatever Allah orders you.”

Hadrat Umar (RA) looked at a youth who were bowing his head, and said: “O youth! Raise your head, because khushu cannot be more than what is in the heart.”

Hadrat Ali (RA) said: “Khushu is in the heart and it means your two hands are softened towards a Muslim, and that you don’t turn your face to right or left.”

The one who shows more khushu than what is contained in one’s heart is in two times hypocrisy. Sahl bin Abdullah says that a person does not have khushu unless all the hairs on his/her body are in khushu. Because Allah (SWT) declared as follows:

This is the khushu that deserves praising. Because when the heart is calmed, fear requires the khushu to become visible, and the owner of that khushu cannot stop it and you see him bowing his head, in adab and humility. Former scholars used to try to conceal this kind of states as much as they could.

The khushu that deserves blaming is the one which causes giving oneself unnecessary trouble pretending to cry and bow like some ignorant people do in order to be seen to have a favourable and high rank. This is a deception of the Satan, and it is caused by the nafs.

“A person breathed near Hadrat Umar (RA) as if he had been in sorrow. Umar (RA) punched him in the chest. Umar (RA) used to make others listen when he spoke, walk fast and hurt when he hit someone.

He used to worship with sincerity and had the true khushu.” Heart is the place of khushu. If it is in the state of hushu, all other organs will be in the same state of calmness and attentiveness as the heart is the sultan of the others. A scholar, who lived in earlier times, having begun his prayer, would not turn his look at anything or think about anything

related to world. Ata said: Khushu means not playing with any part of the body during the prayer. Prophet Muhammad (PBUH) saw a person playing with his beard, and said: “If the heart of this man were in hushu, his other organs would also be in khushu.”