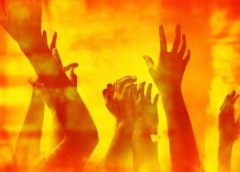 Since the Risale-i Nur is able to respond successfully to two of the most fearsome challenges of modern life, it has proved to be beneficial to many and it affects people’s minds and hearts easily.

The significant results of the Risale-i Nur service, which is a cause of the spreading of faith and knowledge of the Quran, have been attracting attention ever since it was composed. And many people have asked both Imam Bediuzzaman Said Nursi and his students why they were not defeated when confronted with those irreligious and destructive movements.

By distancing the youth from faith, these destructive movements set a barrier between the millions of religious books and the youth who are painfully charmed by the worldly pleasures of the modern movements.

The same centres of evil, in order to decrease the effect of the Risale-i Nur, launched smear campaigns against the Risale-i Nur, its author and his students and oppressed them both physically and psychologically.

Despite these obstacles, the Risale-i Nur has been read with great interest by people, and especially by the youth, and has spread all around the world. What is the reason and wisdom behind this success?

The answer to this question reveals many secrets of the success of Risale-i Nur and shows some important da’wa principles for Muslims who are inviting others to the religion of Allah (SWT).

The answer of Bediuzzaman Said Nursi is as follows: the Risale-i Nur, which is one of the genuine tafaseer of the glorious Qur’an, not only shows the spiritual hell in this world found in disbelief, but also proves that there is a spiritual paradise in this world to be found in faith.

Moreover, it shows that there is spiritual pain in sins, mischief and illicit pleasures and proves that there are spiritual pleasures like the pleasures of paradise in good deeds and manners and practising the truths of sharia.

This is important because there are two particularly fearsome conditions at this time:

The first fearsome condition is the way in which people’s desires are overwhelming their minds and intellects. As future-blind desires prefer present pleasure over great pleasures in the future, they overwhelm the mind and intellect. The only way of saving the people of immorality from their immoral state is defeating their desires by showing them the pain inherent in the same pleasures.

With the sign of the verse [الدُّنْيَا الْحَيَوةَ يَسْتَحِبُّونَ] (Those who prefer the worldly life…) Even though the believers of this time know of the blessings and pleasures of the hereafter, which are like diamonds, due to sway of their desires, they prefer worldly pleasures which are like fragile glasses. The only way to protect believers from this danger is defeating their desires by showing that the pain and torment of hell is apparent even in this world; the Risale-i Nur follows this method.

By frequently comparing faith and unbelief, the Risale-i Nur influences people’s desires in favour of faith and righteous deeds by showing the painful, fearsome results of misguidance in this world and the immediate results of good deeds, good manners and leading a life according to the sharia.

While these comparisons give greater perseverance to believers in their faith, they also make most obstinate people, who are very fond of pleasures of the soul, dislike illicit pleasures and immoral behaviours and encourage them to repent. The Treatise of Fruit, the Treatise of Evidences of Allah and especially Short Words are some examples of this kind.

For example, Bediuzzaman Said Nursi was lecturing his students in Eskisehir prison as follows: ‘Just as the end of this summer and autumn is winter, in the same way, the end of the summer of youth and the autumn of old age is the grave and barzakh(isthmus) winter.’ When he said this, the collective personality which supports immorality and misguidance came in front of him like a human devil and said, ‘We want to taste and make people taste every joy

and pleasure in life, do not interfere in our business’.

Bediuzzaman responded: Since you are not thinking about death for the sake of joy and pleasure, you should definitely know that:

Your misguidance makes you think all past times are dead and have become non-existent. It is a fearsome grave in which demises are decomposed. Since you are related because you are human, and misinterpreting because of your misguidance, pains stemming from those innumerable separations and the eternal death of countless friends destroy your little, drunken pleasure which only lasts for a short time.

Future times are equivalent to non-existence, a gloomy, dead and fearsome place due to your disbelief. As the ones who pass from future to present time are thrown into non-existence after being cut by the knife of death, they bombard your faithless mind with countless painful worries which you are related to because of your intellect.

If you give up misguidance and immorality and enter into the sphere of true faith and straightforwardness, you will see through the light of faith that past time is not nonexistence or a graveyard which decomposes everything. Yet, it is a luminous world which has turned into existence and taken the form of future.

It is a waiting room for eternal souls to enter happiness palaces in the future. Since thebeliever knows these meanings, he even tastes some of the pleasure of paradise in this world according to strength of his faith.

Moreover, He sees through his faith that there is the Merciful, the Compassionate, The Lord of Majesty and Bounty who makes every spring and summer a table spread for His creation. The future is not a gloomy, savage place either. Since the believer sees it through the lens of faith, for him the future is a place of banquets and displays of blessings, full of bounties in the eternal happiness palaces of the One who has endless mercy and generosity, and people are being transferred to there, therefore, he may feel a taste of the pleasure of the eternal world.

That is to say, genuine and trouble-free pleasure is only in faith and can only be through faith.

In this very part, Bediuzzaman Said Nursi makes a comparison between a believer and a non-believer in terms of evaluating the past and the future, and puts forward which one of them lives in comfort in this world and gets more pleasure. Future-blind emotions like immediate pleasures. They see paradise and hell as being far away. For this reason, these comparisons have the aim of defeating emotions through showing the worldly benefits of faith.

Man naturally likes living in comfort, wants to get pleasure and desires to be happy.

“All genuine happiness, pure joy and true pleasure lie in knowing and loving Allah,” says Imam Nursi. He constantly stresses this very topic in different ways in the Risale-i Nur. Hundreds of thousands of young people who have grown up with these precious lessons live in the sphere of faith and uprightness in spite of the great number of irreligious movements.

The second fearsome condition in this time is that people of misguidance attribute their misguidance to science. As their corrupted minds label everything they cannot comprehend as superstition, attributing disbelief to nature, they attack the Qur’an.

In the past, there was much less absolute denial of faith and misguidance stemming from science. For this reason, the lessons and proofs of the Islamic scholars of the past were quite sufficient in those times and would quickly destroy any doubts in people’s minds. Most of the people believed in Allah, so many of them would easily give up their misguidance and immorality after being reminded about Allah and being warned about torments of hell.

In the past, there might have been one or perhaps a few absolute deniers in one place. However, now you can find hundreds of them in one village. If there was one person who entered into misguidance through science and obstinately opposed the truths of faith, it has become a hundred times worse now. These obstinate people take a stance against the truths of faith with their pharaoh-like egoism and terrifying misguidance by wearing the shirt of science. Of course, there needs to be a sacred truth, which will demolish their roots in order to stop their excesses and make some of them believers.

Bediuzzaman Said Nursi says that science proves the existence of Allah. Some of his students who visited him in Kastamonu told him: “Tell us about our Creator because our teachers do not tell us about Islam. Bediuzzaman responded as follows: “Each branch of science you study constantly tells you about Allah and makes the Creator known to you. Do not listen to your teachers, but rather listen to those sciences.”

The one who creates the universe is Allah, who also sent down the religion. Therefore, there cannot be any conflict between incorrupt religion and a science which aims to understand the book of the universe. The universe is a book full of the signs of Allah (SWT). The Risale-i Nur gives proofs of the unseen by reading these signs from the universe.

Countless praises and thanks be to Allah that the Risale-i Nur, which is a spiritual miracle of the Qur’an and one of its illuminating lamps, is a sure cure for the diseases of this time, and breaks the ideas of the most obstinate people by means of the diamond sword of Qur’an.

Moreover, it proves Divine unity and the truths of faith in the number of atoms of the universe, and since the years when it was compiled, it has never been defeated but is victorious even against the most severe attacks.