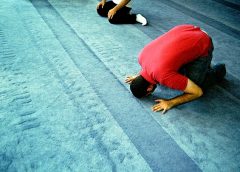 Not long born; still in the first part of life, not old; juvenile, having little experience; inexperienced; unpracticed; weak… The literary meaning of “young”…

Apart from these meanings Islam gives Youth a big importance. Islam pays great importance on the education of the youth. As the major principle in Islam is education, it requires a proper and pure Islamic Education of youth along with scientific education.

Youth is important… One comes face to face with lots of problems in youth… The crisis of finding your personality… The silent cries of this pain stemming from pursuit of personality, thus happiness… It is in our hands to work on ourselves and control our emotions reasonably. Sometimes we get sad and we grief… But no matter what, we must learn how to deal with the later stages of grief… Grief is one thing and learning from your mistakes in another different one… Qur’an teaches us to work on the latter one.

The problem and the illness is clear: “Youth heeds the emotions rather than reason, and emotions and desires are blind; they do not consider the consequences. They prefer one ounce of immediate pleasure to tons of future pleasure. They kill for the one minute pleasure of revenge, then suffer for eighty thousand hours the pain of prison. And one hour’s dissolute pleasure in questions of honour may result in life’s enjoyment being utterly destroyed due to distress at the fear of both prison and enemies. There are many other examples, many pitfalls for the unfortunate young because of which they transform their sweet lives into the most bitter and pitiable lives. Consider a vast state to the north; it has gained possession of the passions of its young people and is shaking this century with its storms.” (from the book A Guide for Youth)

Designating the problem Said Nursi also gives the cure and the solution in Risala-i Nur:

“It is therefore most necessary in this century for all Muslim youths to act heroically, and to respond to this two-pronged attack with keen swords like the Fruits of Belief and the Guide For Youth from the Risala-i Nur. Otherwise those unfortunate youths will destroy utterly both their futures in this world, and their agreeable lives, and their happiness in the hereafter, and their eternal lives, and transform them into torment and suffering. And through their abuses and dissoluteness, they will end up in hospitals, and through their excesses in life, in prisons. In their old age, they will weep copiously with a thousand regrets. If, on the other hand, they protect themselves with Qur’anic training and with the truths of the Risala-i Nur, they will become truly heroic youths, perfect human beings, successful Muslims, and in some ways rulers over animate beings and the rest of the animal kingdom.” (A Guide for Youth)

Youth is crucial… Satan bothers most the youth… One reason why satan bothers the youth is because of their potential power to learn and develop themselves in any branch… Youth has the hope and power. They have the potential either to follow the right path or the wrong one… Therefore, satan bothers to direct them to the wrong path… Some, unfortunately, get lost by these deceptions. You are as young as your faith… In order not to fall in despair one needs to keep his iman (belief) alive by renewing it, by gaining ilm of Allah and practicing it in all his/her life.

The eminent scholar of this age Badiuzzaman Said Nursi warns the youth of the misgivings of satan and gives the cure for the illness: “Your youth will definitely leave you, and if you do not remain within the bounds of the licit, it will be lost, and rather than its pleasures, it will bring you calamities and suffering in this world, in the grave, and in the hereafter. But if, through Islamic training (tarbiya), you spend the bounty of your youth as thanks honourably, in uprightness and obedience, it will in effect remain perpetually and will be the cause of gaining eternal youth.” (A Guide for Youth) According to Said Nursi in order to gain eternal youth one must be upright and obedient and honorable. Therefore, gaining true knowledge is one condition and practicing with this knowledge is another condition of gaining eternal youth.

Youth is essential… It is an advantage of worship, chance to gain experience, chance to learn, chance to practise what you learn in your life, it has the potential to go up so high. As Badiuzzaman Said Nursi declares: “If such a youth demonstrates through moderation and obedience, his gratitude for the pleasing,delightful bounty of youth, it will both increase it, and make it eternal, and make it a pleasure.Otherwise it will be both calamitous, and become painful, grievous, and a nightmare, and then it will depart. It will cause him to become like a vagrant, harmful for both his relatives, and his country, and his nation.” (A Guide for Youth)

One thought on “The True Meaning of Youth”