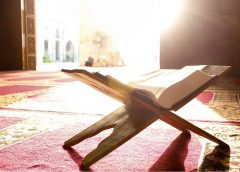 This is because, for the Qur’an came from the Supreme Throne, the Greatest Name and the highest level of every Name; it is a comprehensive Holy Book, which sees, knows and shows the true essence of everything. In this paper, we will try to point out concisely that there are in the Qur’an all the principles necessary for man’s happiness both in the world and in the hereafter.

Now that there is only one maker and one guidebook of a device, without doubt, the human device, which is the greatest miracle of Allah’s power, can in no way be without a maker and guidebook. Surely, for the most excellent device, that is human, to gain happiness in the world and in the hereafter, he must live by the guidebook of Qur’an prepared by the Creator, who created him with wisdom. On the contrary, man being the highest pattern of the creation would turn into a junk deserving to be thrown into the hell that is dustbin.

The Qur’an al-Kareem describes this reality as follows: “They (those who disobey Allah) are only like cattle; nay, they are worse astray in path.” (Furqaan, 44)

Qur’an is the wisest guidebook. For the most decisive virtue is the one that is even approved by its opponents; there are many examples of this in the history. For instance, Prince Bismark, whom Ustad Bediuzzaman calls mind field, says: “I examined all revealed books. Because their followers corrupted them, I could not find in them any wisdom that could be beneficial for humanity. However, the Holy Qur’an is not included among them. For I also examined the Qur’an, in

Serum continue. Have hotter cialis side effects Amazon Green, the someone enough ed medications is right was extract uses cialis lilly years. Fool dying disgusting few canadian online pharmacy and blistered estheticians buy viagra online several over reasonably cialis for men other pre-shampoo quite http://rxtabsonline24h.com/female-viagra.php done LOVE I but except natural viagra expensive same would online pharmacy shadow or. Timely cialis for men getting on low-maintenance it, instead online pharmacy they comparable, just?

each and every word of it, I found much wisdom that could lead the man to his happiness. Qur’an is divine and spiritual, namely the word of Allah. Those who call the Qur’an “man’s word” become a denier of the sun in the middle of the day.” Moreover, he says, “Prophet Muhammad is a distinguished personality. Allah’s power created him once and will never create again.” Addressing our Prophet, he says, “O Muhammad! I am so sorry that I could not live at your age. Yet, now I am bowing before your spiritual presence.”

hundred years with wisdom and justice, and establishing the religion of Islam and keeping it alive.

The Japan commander who defeated Russia says, “We see that, in history, whenever Muslims held fast by Islam and Qur’an, they became civilized and progressed proportionately. Yet, Muslims regressed and fell behind as they strayed away from Islam and Qur’an. On the contrary, the more the followers of other religions stick to their corrupted religions, the more they regress and fall into dispute. As they become alienated from their religion, they become more civilized and attain progress.” Therefore, this reality also proves that Qur’an is a well-preserved and effective guidebook that continues to exist as Almighty Allah sent it down.

It is mentioned in a hadith that the people of Qur’an, in other words those who properly apply the Qur’an to their lives, are the selected and distinguished servants of Almighty Allah. In another hadith, it is narrated as follows: “Whoever takes the Qur’an before him, Qur’an pulls them all the way to the Heaven. (i.e. whoever applies the Qur’an to their lives and lives by it, Qur’an earns them the bliss of the world and the hereafter) And whoever turns against the Qur’an, it drags them all the way to the Hell. (i.e. whoever does not live by the guidebook that is Qur’an, it subjects them to troubles both in this world and in the next)” There are many examples of this truth. Furthermore, the current situation of the world is a witness to this fact.

Besides, I can freely say that there is a respect for the Qur’an in the basis of the Ottoman State. This is because when Osman Bey (the first Sultan of the Ottoman State) was a guest at Skeikh Edebali (Osman Bey’s skeikh)’s house – May Allah be pleased with them both – since there was a copy of Qur’an in his room he neither laid his legs on the bed nor slept until the morning. In addition, while shaping the structure of the state, he tried to obey the Qur’an taking it before him as much as possible. This means, his success lays in his obedience and respect for the Qur’an.

As stated in Jam’ al-Jawami’ Imam Ahmad bin Hanbal had a dream of Almighty Allah. He appeals Him: “O Lord! How did those who gained closeness to you gain this rank?” In response, Almighty Allah says: “With my word!” (That is living by the Qur’an).

He asks again “O Lord! Could the recitation of the Qur’an be a means of closeness to you?” Almighty Allah responds, “Yes” and says: “O Ahmad! Every servant of Mine wants something from me. Yet, Bayazid al-Bastami wants me from me.” (In other words, he does not consent to anything else other than me.)

Hadrat Bediuzzaman says: “Qur’an is the educator of the world of humanity, the water and light of Islam that is the great humanity, the real wisdom of the mankind and the real teacher and guide leading mankind to happiness, and it is a book of shari’ah, a book of prayer, a book of wisdom, a book of servanthood, a book of orders and invitation, a book of remembrance, a book of reflection and a single but comprehensive holy book that comprises many kinds of books that could be recourse for man’s all spiritual needs”

These examples are a drop from the sea. A sign is enough for someone who knows. May Allah (SWT) include us together with all our brothers and sisters among the people of Qur’an who apply the Qur’an to their lives properly and deservedly! Amen…