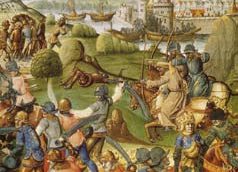 Sultan Suleiman the Lawgiver (known as the Magnificent in the West) of Ottomans asks Yahya Efendi, his milk sibling who was also a scholar at the same time, what causes a state to collapse. The answer the Sultan received from his brother was really striking and guiding even for today: “When all people begin to think ‘so it is none of my business’ about the problems surrounding the social life.”

The problems of the Muslim World are so plethoric that we cannot ignore. Among these is the image of Islam in the world public opinion that has been identified with terror and violence. That image causes Muslims all around the world to suffer a lot. Because of that image, Islamic countries are vulnerable to occupations of western powers which use that distorted image of Islam as a pretext. On the other hand,

the Muslims living in Western countries are treated as potential terrorists and they are ripped off their rights due to that false image.

The political circles which consider ‘the clash of civilization’ advantageous for them incite the differences between the Western culture and Islam, and they conduct a dark propaganda to demonize Islam and Muslims in the eyes of the ordinary Westerners. That propaganda went so far that every individual in the West misjudges the facts about Islam and Muslims, and all their reaction is

based on fear. Who takes advantage of demonizing Islam and Muslims and why? Recently the violence and discrimination against Muslims have been hot debated issues in the USA and Europe. A cultural centre project near ground zero in New York was highly abused by some political circles. On the other hand, there has been a long-discussed issue, the presence of Muslim communities and its implications, in Europe. We are covering these issues as dossier in the present issue.

Ahmed Said Kütgül views the relations between Islam and the West from a historical perspective. Salih Sayılgan gives us an account of Hollywood movie industry after 9/11 attacks, which caused escalation of Islamophobic products. Selahattin Özel takes a closer look into perpetrators of Islamophobia and finally Iqbal Unus analyses the terms Islamophobia and anti-Islamism.

On the other hand, we are taking materialism and atheism onto the cover of the magazine. İdris Tüzün takes a look into philosophical roots of atheism and how it contradicts with reality and its absurdity in terms of basic principles of logics.

In this issue, M. Said Serdengeçti has penned an article titled “Sailing Ships to the Peace”, touching upon the importance of unity among Muslims; and Cemal Ersen sheds light into a critical issue which is questioned a lot: “Why does Allah Create the Evils?”, and Said Yavuz points out the perfectness of the morality of our Prophet (PBUH).

As Yahya Efendi pointed out centuries ago, we are not indifferent to the problems of the

Muslim World and we are devoting the pages of the ninth issue of The Pen Magazine to our most urgent problems. We hope Allah (SWT) will help us in our efforts so that we become successful.

The Criticism Of Atheism

Why does Allah (SWT) create the evils?

Hujjat al-Islam Imam Ghazali: The Sun of the Fifth Century

History of Islamophobia and Anti-Islamism

Risks and damages of margarine