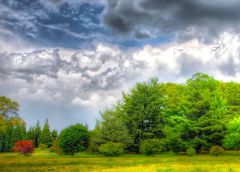 When we research the creation from microorganisms and little particles to the massive galaxies and systems, we conclude that the creation came into being by the work of a deity who is Almighty and Omniscient. This deity is Allah (swt).

Believing in a creator constitutes the basis of all divine religions. As a monotheistic religion, the most important essential of Islam is to believe in Allah’s existence and oneness. There are many proofs that demonstrate His existence and oneness. The greatest four of these proofs are as follows: The first is the magnificent universe that we live in and the things in it which are products of a perfect art and design. The second is all the divine books, the Qur’an being in the first place. The third is all the prophets, the Prophet Muhammad (pbuh) being in the first place. And the fourth is the conscience which is in the heart of every man. Whoever researches these four sources and opens his mind to the information coming from them, will find and get to know his Lord Who created him. For example, if he listens to the words of his conscience, he will hear that it says, “Of course, there is an Almighty and Ever-Compassionate Creator Who created you and everything else.”

The Proof in the Universe

Now, we will focus on some examples from the universe and what it contains, which are the greatest of these proofs. Every man knows that a building must have a builder; a school must have a principal, and a city must have a governor. In the same way, the universe that we live in must have a creator and it cannot continue in existence without someone who will perpetuate the order. This creator and organizer is our Lord Allah (swt).

The Proof in Living Beings

All the creatures that we see around us have a perfect design. Every living being has a system based on sensitive scales and a complex, delicate order. To be able to produce even a simple pill, you need to use precise amount of ingredients and this requires a specialist. It is not possible for a medicine to form randomly. If even a pill cannot form on its own, then a flower, which has more complicated and sensitive systems and furthermore is a living being, can hardly come into existence by chance. Thus, a beautiful and finely-made creature must be the creation of the All-Powerful Creator.

The Proof in the Cell

There is such a delicate order in the cells which are the building blocks of living beings. Is it possible that there is an intelligent person who thinks that a linen factory could come into existence with all its machines already in it, on its own, all of a sudden? An intellect which accepts that a factory cannot form by chance, would never accept that a cell, which is comprised of millions of little particles, could form on its own. As a scientist, Fred Hoyle asks the following question to indicate the impossibility of a cell forming by chance: “A junkyard contains all the bits and pieces of a Boeing-747, dismembered and in disarray. A whirlwind happens to blow through the yard. What is the chance that after its passage a fully assembled 747, ready to fly, will be found standing there?” (Nature, 294 (1981), p.10) Thus the existence of a little cell is only possible through the power of Allah Who has this capability.

The Proof in the Human Body

The impeccable structure of the human body points clearly to the existence of Allah. All the cells and parts of our body work in a network of complicated relations and with an extraordinary harmony. While all these functions are happening in our body, we are not even aware of them. Nobody imagines that a human-robot, which is a simple imitation of the human body, could form on its own. Thus, a sound mind would not presume that a human body could form and function by chance. Allah (swt) warns us in the Qur’an that it is He Who created us as follows:

“O human! What is it that deludes you concerning your Lord, the All-Munificent? He Who has created you, fashioned you, and proportioned you (in measures perfect for the purpose of your creation); having constituted you in whatever form He has willed.” (Infitar, 82:6-9)

We can compare all the other living beings to the human body. All of them show the existence of the Creator Who has eternal knowledge, power and will with their complicated but perfect structures. The verses such as, “No living creature is there, but He holds it by its forelock,” (Hud (puh), 11:56) state that He created all living beings and they are under His control.

The Proof in the Atom

All things in the universe consist of atoms. There is a wonderful pattern and order and a great energy in every atom. It is like a small solar system with its nucleus in the centre and the electrons rotating around it. This incredible system is squeezed into such a small space that it cannot be observed exactly through the most highly developed electron microscopes. Such a perfect and small structure cannot form coincidentally. Coincidence produces disruption and disintegration, not order and design. Therefore, only the Almighty and Omniscient Allah created the atoms which are small models of the universe. Furthermore, the whole universe is like a huge sea comprised of atoms. Then whoever created an atom it is he who created the whole universe. A verse of the Qur’an which tells that everything was created by Allah (swt) is as follows: “He creates everything and determines its destiny.” (Furqan, 25:2)

The Proof in Life Itself

One of the greatest proofs of the existence of Allah (swt) is the life itself. All living beings in the world are created with some fundamental elements such as air, water and soil. Especially before life started in the world, there was no life in these elements. How do the living creatures which come into being by the assembling of inanimate elements in materials such as soil and water come to life? Furthermore, feelings such as love and hate, and senses such as seeing and hearing do not exist in these elements. Then, this miracle of life which is the most precious of systems in existence can come about only through the creation of Allah Who has eternal life. It is not possible that the life can come from inanimate beings. A verse of the Qur’an on this issue is as follows: “It is He Who has given you life, then He causes you to die, then He will bring you to life again.” (Hajj, 22:66)

The Proof in the World

When we look at the structured system in the world that we live in, we realize the existence of a Creator Who has adjusted it according to the conditions of life on the Earth. There is a finely balanced system in the world. The great and complex events such as rotating of the world around itself and around the sun; the consecutive formation of the four seasons, and the days and nights, in most places of the world (with systematic exceptions in some places); the wind, rain and snow, and the growing and proliferation of living beings work in a total order. The world was created in a way that it can serve the continuance of life on Earth. It provides a most suitable environment for living beings with its seas, land and mountains. Its distance to the Sun is ideal, any closer or farther away and life would not exist on the Earth. Though the Earth is rotating around itself and around the Sun at a high speed, it does not disturb its inhabitants. It seems like a large space craft is voyaging in outer space with its passengers. Furthermore, the foods and nutrition of the passengers are not provided from outside, but they are grown and produced within the craft itself.

What would we think if we were to see a huge spaceship in which the passengers were offered banquets of food on large tables in that way? Would anybody presume that this ship was formed randomly by the assembling of materials which were aimlessly travelling through space, and that the passengers in it came into existence by chance and without a meaningful purpose? Now, the world is created with greater and more sensitive scales than a cutting edge spaceship. Such a ship came into existence, of course, only by the creation of Allah Who has eternal power and skill. A verse of the Qur’an indicates the signs of existence of Allah (swt) as follows: “And it is He Who has spread the Earth wide and set therein firm mountains and rivers, and of fruit of every kind He has made mated pairs. He covers the day with the night. Surely in that are signs (manifesting the truth) for people who reflect.” (Ra’d, 13:3)

The Proof in the Beginning of the Universe

In the beginning there was nothing, then the universe and all that is in it came into existence. This information is confirmed by the modern physics and astronomy of today. According to the scientists, the universe came into existence by the explosion of a zero point. After this explosion, the galaxies, stars and planets, which have their own order and harmony, came into existence. The scientists say that this first explosion cannot have been a random, purposeless breakthrough, but rather a planned expansion and development, because a random, purposeless explosion would not have produced such an order.

Nothing can form on its own. If this universe has a beginning, then it needs a Creator Who is eternal. This Creator, as the Qur’an makes clear to us, is Allah Who has eternal knowledge and power. He created the universe out of nonexistence with a big bang. Allah (swt) indicates in the Qur’an how He has created existence and is continuing to expand it as follows: “And the heaven, We have constructed it mightily, and it is surely We Who have vast power, and keep expanding it.” (Dhariyat, 51:47) Many of the verses in the Qur’an invite us to ponder about the creatures and to draw lessons from them as in the following verse: “Surely in that are signs of truth for a people who use their reason.” (Ra’d, 13:4) To see and reflect on the creation of Allah is both a great honour and a duty for a man of wisdom. A man who is aware of this fact can realize the necessity of there being a creator by scrutinizing the creatures, just as he could realize that there must be a builder by looking at a building.

When we consider the beings around us with a careful mind, we see a design and plan in everything, large or small. Wherever we look, we understand that a hidden hand calculates, creates and handles the atoms, the cells and the stars. The whole universe is like a living organism all of whose parts complete each other in delicate and complex ways. Allah says in the Qur’an regarding this fact: “Surely We have created each and every thing by (precise) measure.” (Qamar, 54:49)

The plan, order and design which are seen in the beings and systems in the universe show that they were created by Allah (swt), Who has eternal knowledge and power.