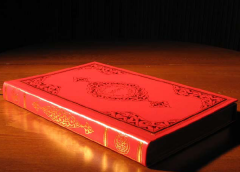 What is the Qur’an and what is the definition of it?*

• The Qur’an is the entire book of the revelations sent down by Allah (SWT) to the Prophet Muhammad (PBUH) over his 23 years of prophethood.

• The Qur’an is “the last heavenly book.”

• The Qur’an is “the word of Allah” which is also known as “Kitabullah: the book of Allah”; Furqan; Tanzil (that which is sent down); Mushaf (the manuscript bound between two boards, written book); Kitab (Book); Nur (Divine light); Dhikr (remembrance) and “Umm-ul Kitab” (Mother of the books).

• The Qur’an was sent down on 4 essences:

1. Tawhid (The existence and unity of Allah)

• The Qur’an, being the word of Allah (SWT), is a book that explains the unique existence, reality, attributes, names and actions of Allah which differentiate Him from His creatures.

• The Qur’an, being the hard evidence and the clear interpreter of the existence and the unity of Allah (SWT), is “the Book of Hidayah” (The Book of Guidance) that defines Allah to His servants.

• The Qur’an is “The Book of Sharia” (law) that provides all kinds of social, economic, judicial, administrative, civil and ethic orders in the society through Divine Commands.

• The Qur’an is “A Miraculous Wisdom Book” in which any science sought for may be found, and it is also an essential book with which the people of wisdom can never be sated.

• The Qur’an is “The Book of Prayer” that brings man closer to Merciful Allah (SWT), gives peace to the soul and acts as the interpreter to the desires and wishes of man.

• The Qur’an is “The Book of Reflection” that convinces man to reflect upon the reason for his creation; on this world and the hereafter;  on paradise and hell; on the wisdom and the reality of each creature in the universe, and on the attributes and the names of Allah that are seen in the universe.

• The Qur’an is “A Treasure of Miracles” in terms of its wondrous qualities, such as its eloquence; the fact that it does not bore its listeners and readers though they read and listen over and over again; its not being distorted in any way; its being easily memorised; the fact that its freshness is preserved; that it addresses those in each century and of every level of understanding, informing about the past and the future and being impossible to be imitated.

• The Qur’an is “The Greatest Miracle of the Last Prophet, the Prophet Muhammad (PBUH).”

• Revelation of the Qur’anic verses started on the 16th night of the month of Ramadan in the year 610, and ended on the 9th day of the month of Dhil Hijjah in 632. It was revealed section by section during those 23 years.

• The Qur’an starts with “Suratu’l Fatiha”, and ends with Suratu’n Nas.”

• The longest surah of the Glorious Qur’an is “Suratu’l Baqara” (286 verses) and the shortest one is “Suratu’l Kawthar” (3 verses).