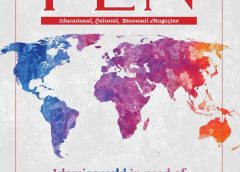 Editor’s letter: He who knows his Lord saves his hereafter Y.Emre Pehlivan

Allah (swt) has granted human with a domain of legal and illegal and a will and freedom to choose between them. Human is tested with this faculty called nafs which is predisposed both for good and evil.

Intellectual arrogance disease may lead people who are more or less educated to oppose to the great scholars of Islam, and may lead them to refuse their ideas. What common believers need to do toward those great scholars is to approach them with good opinion, trust and submission.

The sale of one’s self to Allah is the most rewarding of transactions.

Twelve Iraqi Islamic scholars from The Union of Sunni Scholars of Iraq were welcomed in Hayrat Foundation for a Risale-i Nur study from January 26th to January 31st 2015.   Participant scholars told that they got great benefit from the whole program which included an intensive Risale-i Nur group study and visiting historical places of Istanbul. After the program, we asked them about Bediuzzaman Said Nursi and Risale-i Nur. We share with you the answers we got.

The spiritual bonds among us Syafiq Shafii

It is our responsibility to know the spiritual bonds that can bind Muslims to each other for the unity of Islam.

Islamic economy looks more on human behaviour in managing natural resources for the benefit of themselves and community. The ill disposition of the ownership, and the misdistribution of the wealth amongst people, therefore, must be addressed.

Youth is a great blessing which we can make eternal by spending it in the way of Allah (swt).

A world that is enduring, stable, and perpetual From the Fourth Indication of the Tenth Word

It is by no means possible that our Creator should possess this world resembling a temporary guest house, but not possess another, perpetual world that is stable, and that is the locus of the manifestation of His sublimity.

Creating one thing and everything Nader Medeiros Hasan Jaber

What is holy for families? Mustafa Topöz

What is spoken most in family is its most holy.