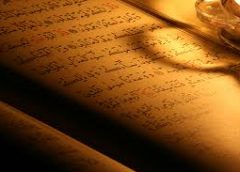 “If the whole of mankind and Jinns were to gather together to produce the like of this Qur’an, they could not produce the like thereof, even if they backed up each other with help and support. (Isra, 88)

They used to bury their daughters alive, they considered the women as commodity to be sold and bought and they did not have concepts such as justice, laws, rights, conscience, mercy and reason. However Qur’an transformed such kind of a society into a master or a teacher over the “civilized nations” such as Persians, Romans and Chinese of then.

One of the significances of the Qur’an is its literary aspect. Qur’an is a sacred book which is a miracle in terms of eloquence and succinctness. What is interesting is that although the Arabs were uncivilized in many aspects they were in peak in oral literature. Even though the rate of literacy was low the poems and sagas which were spread through tongues were always alive and popular. Qur’an stroke at the heart of such kind of a society that thought that the literature was their pride and Qur’an had made it contentious.

It is really interesting that the Arab community which were the doyen of the oral literature admired and surrendered to the eloquence and succinctness of the Qur’an. Indeed, they had to do this because they did not have the courage to retaliate the literary challenge of Qur’an. It is a clear sign of this surrender that the daughter of Lebid, one of the most famous poets of then took down his father’s poems from the wall of the Ka’ba and said about “they do not have value against the verses of Qur’an anymore”.

Qur’an challenged its opponents who were the masters of the oral literature saying: “And if ye are in doubt as to what We have revealed from time to time to Our servant, then produce a Sura like thereunto; and call your witnesses or helpers (If there are any) besides Allah, if your (doubts) are true. But if ye cannot- and of a surety ye cannot- then fear the Fire whose fuel is Men and Stones,- which is prepared for those who reject Faith” (Baqarah, 23-24).  However as Al Jahiz stated, instead of compete with the pen which is the easiest way of the struggle they preferred the sword which is the hardest and containing the danger of death for they did not hope for victory against Qur’an.

I would like to end my article with the words of Bediuzzaman Said Nursi regarding that matter: “Thus, if it had been possible to dispute it, is it at all possible that, while there was an easy solution like disputing the Qur’an with one or two lines and nullifying the claim, they should have chosen the most dangerous and most difficult, the way of war? Yes, is it at al1 possible that that clever people, that politically-minded nation, who at one time were to govern the world through politics, should have abandoned the shortest, easiest, and most light way, and chosen the most dangerous, which was going to cast their lives and ail their property into peril? For if their literary figures had been able to dispute it with a few words, the Qurtan would have given up its claim, and they would have been saved from material and moral disaster. Whereas they chose a fearsome and long road like war That means it was not possible to dispute in by word; it was impossible. Therefore they were compelled to fight it with the sword.” (Twenty-fifth word, First Light, First Ray)