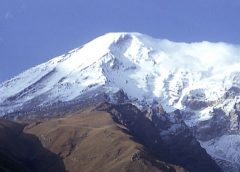 Was there a pair from each animal species in the Noah’s Ark? If so, wouldn’t it be an enormous Ship?  And also, did the Flood of Noah cover the whole earth?

The issue of “a pair from each species” is described in the surah Hud (11:40). But, the question “How did so many animals gather in a ship?” has not been given attention and not answered in the five or six important interpretations we examined.

There are two possibilities that come to mind:

1- Those animals were the quite necessary ones for the people’s daily life. The animals which would be needed soon after getting off the ship.

2- As some Muslim researchers defend today the Flood did not cover the entire world but some part of it such as Mesopotamia plain because of that all the people were living together in that early period of the history.

Otherwise, how could it be possible to gather millions of animal species in a single ship which could only cover only a top of a mountain?  Besides, it is written in commentaries that the mountain is a small one located near Mosul in Iraq.

And also how could it be possible for the animals living overseas to come and gather such as the lamas from America and kangaroos from Australia?

Allah knows best, however our conviction is that the Flood covered not the entire earth but the entire humanity.

It is written in Elmalı Commentary that the Flood might not have occurred all around the world:

“According to this, the area of the Flood did not cover whole earth including the poles. The places where people settled in that time should be taken into consideration. There are different opinions among scholars as to whether the prophet Noah was sent as a messenger to all humanity or only to his tribe. In that age, were the people still one tribe since Adam, or were they separated into different tribes and settled in different regions? This much is certain that the location of the prophet Noah’s tribe, to whom he was sent to as a messenger, was entirely destroyed by the Flood. The rest of the comments can be either presumption or guess. (Hud, 11:40)

That is to say, the generality of the Flood of Noah is an estimation and prediction. There is not a clear claim about this issue in Islam.

Another part from Elmalı Commentary to elaborate the issue:

“According to Alusi’s explanations, it is said the peoples of prophet Noah were living in and around the Arabian peninsula. The famous opinion about this is that he lived in Kufa region in Iraq and he was charged with prophethood there.

It is understood from this that the feature of the Flood’s covering everywhere refers to the peoples of Noah all together; and for this reason it is not possible to estimate whether there were other peoples in other parts of the world or not. And this is the Alusi’s opinion.” (Nuh, 71:1)